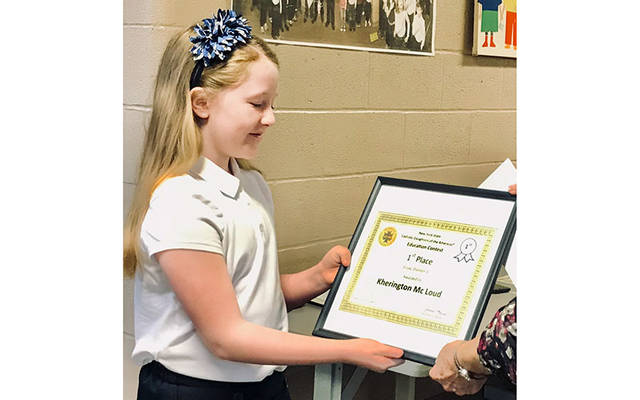 Kherington McLoud placed first in her division in both the local and state portions of the Catholic Daughters of the Americas’ annual essay contest. (Photo courtesy of Our Lady of the Lakes Catholic Community)

Kherington McLoud wants to be an author when she grows up. She’s only 10, but she’s already well on her way to accomplishing that goal.

Last winter Kherington, who at the time was in the fourth grade at St. Michael School in Penn Yan, penned an essay that went on to win top honors in its division in both the local and state portions of the annual essay contest sponsored by the Catholic Daughters of the Americas. Kherington’s essay then moved on to the national competition, and she will find out how it did sometime later this summer.

Kherington’s award-winning essay started out as a classroom writing assignment.

“The fifth-grade teacher came into our classroom and announced what we were going to be doing. I thought that it was going to be a nice experience,” Kherington recalled.

Some students might groan when they receive writing assignments, but not Kherington. She began writing books at least two years ago.

“I like to write about make-believe stuff and make up stories. And there’s amazing things that happen during your life and real stories too. My first book ever was a book about my teddy bear when I was really little,” she told the Catholic Courier.

Kherington was a prolific author by the time she was in second grade, when she decided to put her own spin on her weekly spelling and vocabulary assignments. Every week Kherington’s teacher gave her students a list of words to copy over and use in a sentence, but Kherington took the assignment one step further.

“I decided I would use all the words in one story, so every sentence would be part of a story,” Kherington recalled.

Those early writing assignments were impressive but were just the tip of the iceberg, according to Kherington’s mother, Erika Holland.

“I was just surprised at the volume of writing. She has written quite a few books, and they’re big books, with 35 or more pages,” Holland said. “Writing is her favorite hobby. It’s not video games, it’s not sports so much. She would rather sit and write all day.”

Given Kherington’s passion for writing, it’s no surprise that she was excited when she was assigned to write an essay for the Catholic Daughters of the Americas contest.

“I went home that night and I thought about it, and I had a bunch of ideas so I started writing them out. Then I looked at them and I chose which one I thought was going to be the best,” Kherington explained.

She worked on her essay a little bit that night and a little more the next day, then showed what she’d written to her mother.

“I thought from the get-go it was spot-on. It was 500 words and I think she was right there and I didn’t even suggest any changes,” Holland remarked. “She turned in her draft and her teacher came up to me (later) that day and said, ‘Kherington’s essay is great.’”

Inspired by Psalm 40, the theme for this year’s Catholic Daughters of the Americas essay contest was “Here I am Lord. I come to do your will.”

“This means that wherever you are, whatever it is you are doing, you should try to be like Jesus. I try to be Christ-like in school, at home, in my community, and at church,” Kherington wrote in her essay.

Kherington wrote about the ways she tries to be Christ-like in each of those places. Through her essay she recounted a time when she once asked other students to stop laughing at a classmate who was struggling and described her efforts to help raise money to build a new bridge on the Keuka Lake Outlet Trail.

She also wrote about her commitment to praying at home each night before bed.

“You can talk to the Lord about anything,” she wrote. “You can even thank him for just being alive! Everything on this earth is a blessing. You should do your best everywhere you go, in anything you do. Of course sometimes you’ll make mistakes, because everyone does, but just ask the Lord for forgiveness.”

Kherington also wrote about the ways she serves God at weekly Mass as an altar server. Even when she is not serving on the altar, she makes sure she’s actively participating in the Mass, singing the songs and receiving the Eucharist, she wrote.

“Remember to always do what God would want you to do. Always do what Jesus expects you to do,” her essay concluded. “The Holy Spirit will always guide you. ‘Here I am Lord, I will always try to do your will.’”