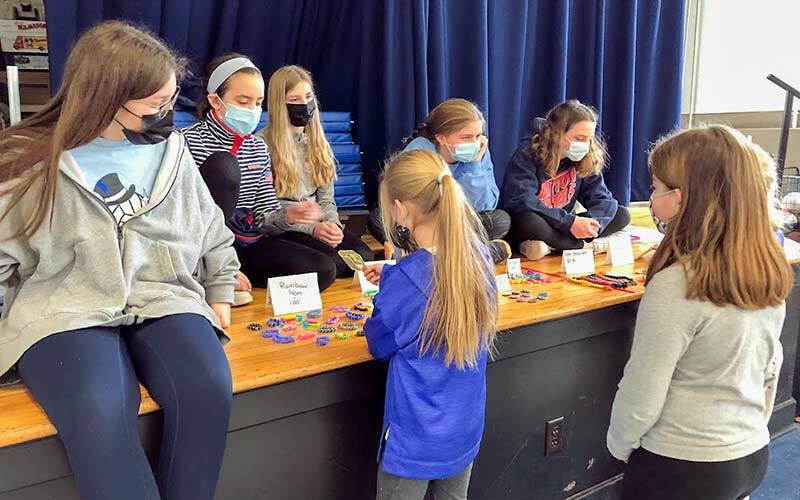 No one was surprised when sixth-graders Jane Topa and Frankie Reiss decided to organize a fundraiser to benefit the Wilmot Cancer Institute.

“It’s in keeping with how they approach life. They’re always looking for ways to help others,” explained Patricia Selig, their principal at Seton Catholic School in Brighton.

What was surprising, Selig said, was that the girls raised more than $580 in just one week, and they did it by selling small, handmade items to other students during their lunch periods.

Topa’s father, Thomas Lynch, passed away last August after succumbing to leukemia. Throughout his battle with the disease, he’d been treated at the Wilmot Cancer Institute, and so had Topa, an 11-year breast-cancer survivor. In December, Jane decided she wanted to do something to raise money for the institute, which is part of the University of Rochester Medical Center’s system.

Jane quickly enlisted Frankie’s help, as the pair — friends since first grade — have worked together on several charitable efforts. In January and February, for example, Frankie and Jane’s Catholic Youth Organization basketball team collected items and raised $150 for an organization called Happy Birthday Cha Cha Cha, which provides children living in poverty in Rochester, Rome and Buffalo with gift bags on their birthdays.

Jane and Frankie have undertaken other fundraising efforts on their own, such as the lemonade stand they set up near the Lilac Festival one year to raise money for Golisano Children’s Hospital. Like the fundraiser for the Wilmot Cancer Institute, some of the girls’ projects are inspired by challenges Jane, Frankie and their families have faced, noted Meg Reiss, Frankie’s mom.

“They come up with all of this on their own as a way to support one another and others who are going through similar struggles. It is incredible to see them at work,” Reiss said.

A plan comes together

After deciding they wanted to support the Wilmot Cancer Center, Jane and Frankie decided to make bracelets and pins, since they enjoy crafting. Next they approached Selig and asked permission to sell their wares during the school’s lunch periods.

“We had to write a proposal to her,” Frankie explained.

“She said yes, then she helped us publicize it. She sent out an email to parents, and we made posters to put around the school,” Jane added.

In December Jane and Frankie began preparing items to sell and worked steadily through January to create and price their merchandise. They decided rubber-band bracelets would be sold for $1 apiece, beaded bracelets for $1.50 apiece and string bracelets for $2 apiece. Pins, meanwhile, would be $2 apiece, and stickers 50 cents apiece.

“We made more than 100 bracelets before we started the sale, but then we ran out pretty quickly,” Frankie remarked. “People liked them. We pretty much sold out.”

Every day that week, Jane and Frankie rushed home from school to make more bracelets, and even recruited their friends to do the same, Topa said.

“Everyone really got behind them and it was great. The Seton community has always been super supportive,” she added.

By the end of the week, Jane and Frankie had raised $582.60 for the Wilmot Cancer Institute. It felt good to be able to help others, Jane said.

The girls also provided Seton students with a shining example of how to serve others, Selig said.

“Jane and Frankie are wonderful role models for everyone in our community. They exemplify our culture of kindness and acceptance of others,” she said.

The girls will graduate from Seton this June, but Topa believes their service efforts will continue through their middle-school years and beyond.

“They’re always generous and want to do different community-service things. I don’t think it will end here,” she said.