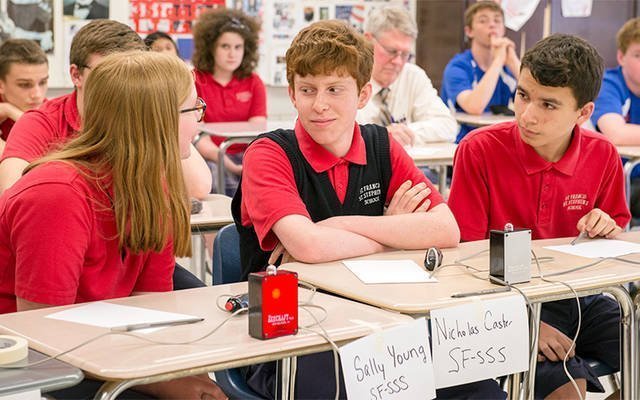 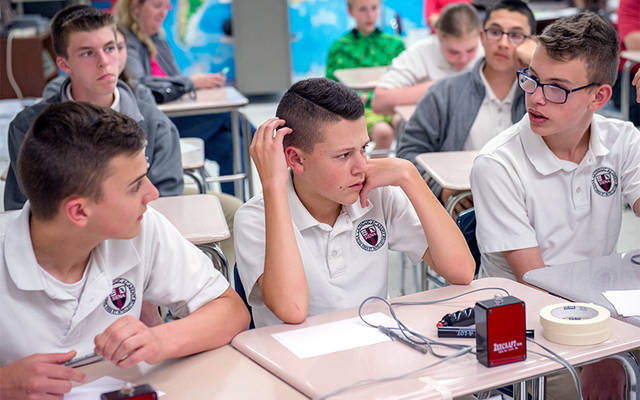 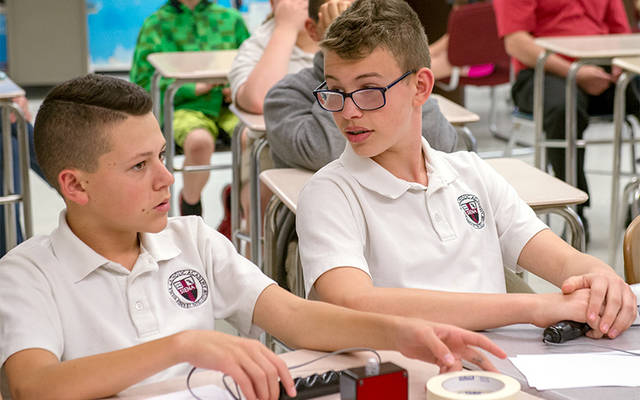 FAIRPORT — The intermittent sounds of game-show-style buzzers drifted out of several classrooms on May 10 as middle-schoolers from 18 local schools competed in the Rochester region’s 2018 Academic Challenge Bowl playoffs.

In one classroom eighth-grader Nicholas Caster buzzed in and correctly answered a question about Paris followed by one about popular pop-rock band Maroon 5. He and his teammates from St. Francis-St. Stephen School in Geneva — as well as their opponents from Spencerport’s Cosgrove Middle School — were stumped, however, by the next question about modular arithmetic.

The Geneva school is one of the three Catholic schools that participated in Academic Challenge Bowl leagues in the Rochester region during the last school year. St. Francis-St. Stephen, Siena Catholic Academy and McQuaid Jesuit High School each earned the top spot in their respective leagues, and all three schools were represented in the May 10 playoffs at Fairport High School.

Academic Challenge Bowl is the middle-school version of the more well-known MasterMinds, which is for high-school students, Wheatley explained. During a round of competition, four students from one team compete against four students from an opposing team. Players ring electronic buzzers when they think they know the answers to the questions read by the moderator in front of them.

The first student to buzz in and correctly answer one of these toss-up questions then earns the opportunity for any of the four players on his or her team to answer three bonus questions, Wheatley explained. Each contest also includes a lightning round at halftime, after which teams may substitute in different players if they wish.

Players must be prepared to answer questions on a wide variety of topics, Wheatley added.

“There are questions about art, music, literature, math and science, questions about history and geography, pretty much any topic. There may be questions about sports, TV shows, and every now and then pop culture,” he said. “You try to have a bunch of students (on the team) that have varied interests. The kids who do the best are the kids who are well-read.”

Nicholas said his favorite questions are those about current events, while classmate Sally Young said she prefers questions about literature and pop culture.

On Siena’s team, meanwhile, Graham Fox specializes in questions about history, while his teammate, J.J. Lemieux, is known for being good at geography, Graham said.

Preparing for a meet is like studying for a test, except Academic Challenge Bowl participants must be able to recall everything they’ve learned in every class, as well as knowledge they’ve gained on their own time, Galletto added.

This extra reinforcement and retention of knowledge is just one of the many benefits that comes with participation in Academic Challenge Bowl, Hendrick noted.

“It’s just another social opportunity. Maybe athletics is not your thing, but here’s another opportunity for you. ‚Ä¶ You’re using your mind, your brain,” Hendrick said.

Academic Challenge Bowl meets provide a way for students who are not athletically inclined to have the experience of representing their school in competition, she said.

“It’s another way to be competitive and be recognized for talents besides the baseball field or the football field,” Wheatley added.

Athletes enjoy Academic Challenge Bowl because it allows them to flex different muscles than the ones they use in their more physical competitions, said Nicholas, an avid soccer and baseball player.

“It’s pretty different. I feel like on a sports team you’re all trying to do the same thing. On an Academic Challenge Bowl team it’s almost the opposite,” J.J. added.

Teamwork is crucial in both types of competition, but Academic Challenge Bowl sometimes places more pressure on individuals, since only four compete at a time, J.J. explained.

“The pressure is on you when you’re up there,” added Mia Rasmussen of St. Francis-St. Stephen School, noting that the experience is nonetheless an enjoyable one. “It helps you get a good learning experience, and it’s fun to socialize.”