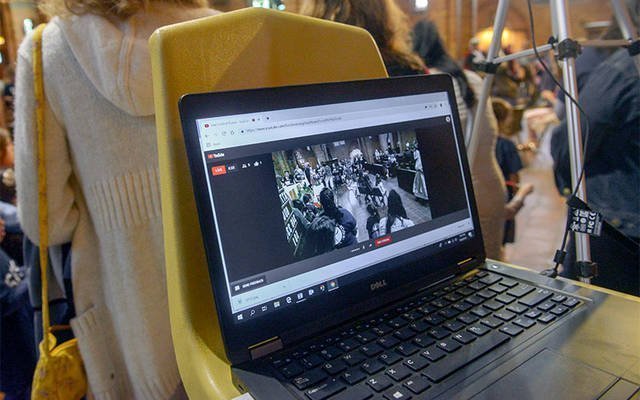 Students from St. Francis-St. Stephen School take part in a living rosary and May crowning, which was livestreamed by the diocesan Department of Catholic Schools on May 8. (Courier photo by John Haeger).

The Diocese of Rochester recently found a space for all of the students from its 18 elementary and middle schools to gather to pray the rosary together.

Where is this accommodating venue?

Since early February, the schools have been taking turns livestreaming videos of their students praying the rosary aloud, and they will continue to do so through June 19. Each Wednesday at 1:30 p.m. — except during school breaks — viewers who visit the Diocese of Rochester’s YouTube channel are able to watch the live feed and pray along with the students who are leading that week’s recitation of the rosary. Those who are unable to watch the livestream in real time can access a recording on the YouTube channel anytime after the rosary has ended.

“We’ve had over 2,000 views of our videos and counting, which is pretty awesome,” remarked Jim Tauzel, coordinator of curriculum and instruction for the diocesan Catholic Schools Department. “It’s just been beautiful to see the kids embracing it so much, not only that they’re praying together, because they do that in school a lot, but that they’re praying with other kids like them.”

Teachers are able to pull up the YouTube channel on the smartboards in their classrooms, so their students are able to pray along even if their school is not the one leading the rosary that week.

“It is a great way to connect our school with all the other Catholic schools in the diocese and create that community diocesanwide,” said Frank Arvizzigno, principal at St. Lawrence School in Greece. “I think it’s great to find ways to connect all the Catholic schools together and get everyone to experience each other’s school and get all the students to work together.”

Arvizzigno, whose school led the rosary on May 1, said the project also promoted a spirit of cooperation and unity within his own school.

“It’s an activity where everyone’s working together. It helps to strengthen that community atmosphere that we have here,” Arvizzigno said.

St. Lawrence’s faculty and students approached the task of leading the rosary from a different angle than most of the other schools. St. Lawrence’s contribution to the project was not a live video of students praying the rosary on May 1, but a combination of videos recorded in late April and put together using Flipgrid, an online social-learning platform increasingly used in classrooms to engage students in discussion and collaboration.

In St. Lawrence’s “mix tape,” as the Flipgrid project is called, each prayer of the rosary is a separate short video, and the videos can be viewed separately or in one continuous loop. Some of the videos depict individual students reciting prayers, some feature classes reciting the prayers together in their classrooms and still other videos depict the entire student body gathered together in prayer.

Each school had a slightly different take on the basic assignment, and that’s one of the things that made the project so beautiful, Tauzel said. The March 20 live video from St. Mary Our Mother School in Horseheads, for example, showed students praying the rosary over quilts made through the school’s Prayers and Squares group, which creates quilts for people in the community who could use prayers, he said.

“It provided kind of a quick little peek into that beautiful tradition,” Tauzel noted.

Students from St. Francis-St. Stephen School in Geneva led the rosary on May 8 and combined a living rosary with their school’s May crowning ceremony. Students at St. Agnes School in Avon placed paper beads on a large rosary drawn on paper as the prayers were recited, and All Saints Academy in Corning produced a video of its preschool students praying one decade of the rosary, as well as a video of the rest of the student body praying a full rosary.

Tauzel, who traveled to most of the schools to livestream their prayers using his phone, said the atmosphere was always tranquil while praying.

“But when you hit the end button and tell the kids there have been 111 views already, they get really excited,” he said. “They can see they’re part of something bigger than themselves and their school.”

The students were excited to be a part of the project and sometimes asked Tauzel if they could share the videos on their social media accounts or link to them on their YouTube channels. Many children and teens already have an online presence, he said, and digital interaction is something that’s become an integral part of life in today’s society.

“It’s not something we hide from because it’s so integral to our society today. Rather than hiding from the technology we have, one thing schools can do is teach our kids how to use those tools for good,” Tauzel said. “If we’re going to use technology, we’ve got to learn it and build on it as a platform for sharing the faith.”

EDITOR’S NOTE: To see most of the schools’ rosary videos, visit https://www.youtube.com/playlist?list=PLRE0vJfTMdIz7X8BdqlzXEIL_t57NRgmq