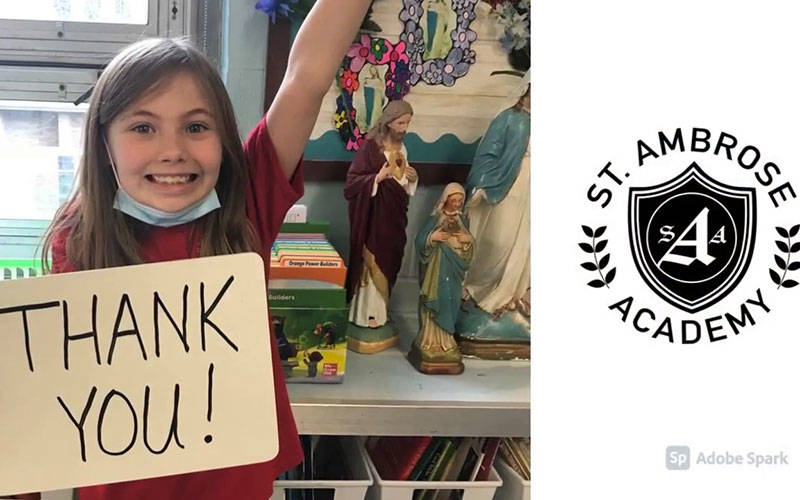 Students at St. Ambrose Academy in Rochester made a video to support Diocese of Rochester seminarians. (Screenshot courtesy of St. Ambrose School)

“You’ve got this! Listen to God. Follow his lead. And know that we are praying for you!”

Those are the inspirational words the students in Regina Fabbro’s third-grade class at St. Ambrose Academy recently shared with the men currently in formation to become priests for the Diocese of Rochester. Fabbro and her students worked together to create a video to thank the seminarians for answering God’s call and assure the seminarians of their prayerful support.

“It’s important for our children to realize that they can have a big impact on the lives of others,” Fabbro remarked. “And it’s especially important that they realize that as Catholics, we owe so much to those who listen to God’s call to religious life.”

The idea for the video was born when Fabbro and her students learned that Father Robert Schrader would retire from his 17-year pastorate at Rochester’s Peace of Christ Parish when he reached senior-priest status in late June. St. Ambrose Academy is located on the grounds of Peace of Christ Parish.

“We all wondered who would replace Father Schrader, who has been so central to our school’s success,” Fabbro said.

The school community soon learned that Father Peter Mottola would succeed Father Schrader as pastor at Peace of Christ. The transition, however, prompted Fabbro and her students to reflect on priestly vocations.

“It reminded our class of the great need we have for holy priests,” she explained.

Fabbro’s students remembered seeing the faces of the Diocese of Rochester’s seminarians on a poster hanging in the school’s hallway and decided they wanted to pray for these men, she added. At first, the students thought maybe they’d find a prayer for seminarians that they could recite regularly.

“Those we found, though, didn’t sound like us, so we decided to create our own,” she said.

“We spent time talking about the struggles these men face, like academic workload, loneliness, missing loved ones (and) being far from home,” she said, noting that these conversations were eye-opening for her students. “They do not automatically recognize the kind of spiritual support that our seminarians need, or just how hard the process of becoming a priest is.”

The third-graders then worked together to craft a message to record and share with the seminarians. The students already were familiar with the process of recording and editing video and creating multimedia presentations, as earlier in the year they’d created commercials advertising God’s love.

Fabbro recorded video of each student holding a whiteboard containing a part of the message for the seminarians. They began their message by thanking the seminarians for listening to God and following his call.

“We know your training must be hard. Sometimes we struggle with schoolwork too,” their message continued. “Becoming a priest is hard. You might feel lonely or tired, or like you need a break. But remember please, you are heroes to us! Our own pastor is retiring this year, and we always need help to become saints.”

“May God bless you and give you strength,” they continued. “And remember, the third-graders at St. Ambrose Academy are with you!”

The students loved creating the video and were excited to see the finished product, which they sent to Father Matthew Jones and Father Peter Van Lieshout, codirectors of priesthood vocation awareness for the Diocese of Rochester. Father Jones and Father Van Lieshout sent the video on to the seminarians, and three of those men sent thank-you notes to the class.

“One even shared that we can continue to write to him in the future. Our class was blown away by reading about the impact they’ve had on these special men,” Fabbro said.

Tags: Catholic Schools, Holy Orders
Copyright © 2022 Catholic Courier, Inc. All rights reserved. Linking is encouraged, but republishing or redistributing, including by framing or similar means, without the publisher's prior written permission is prohibited.