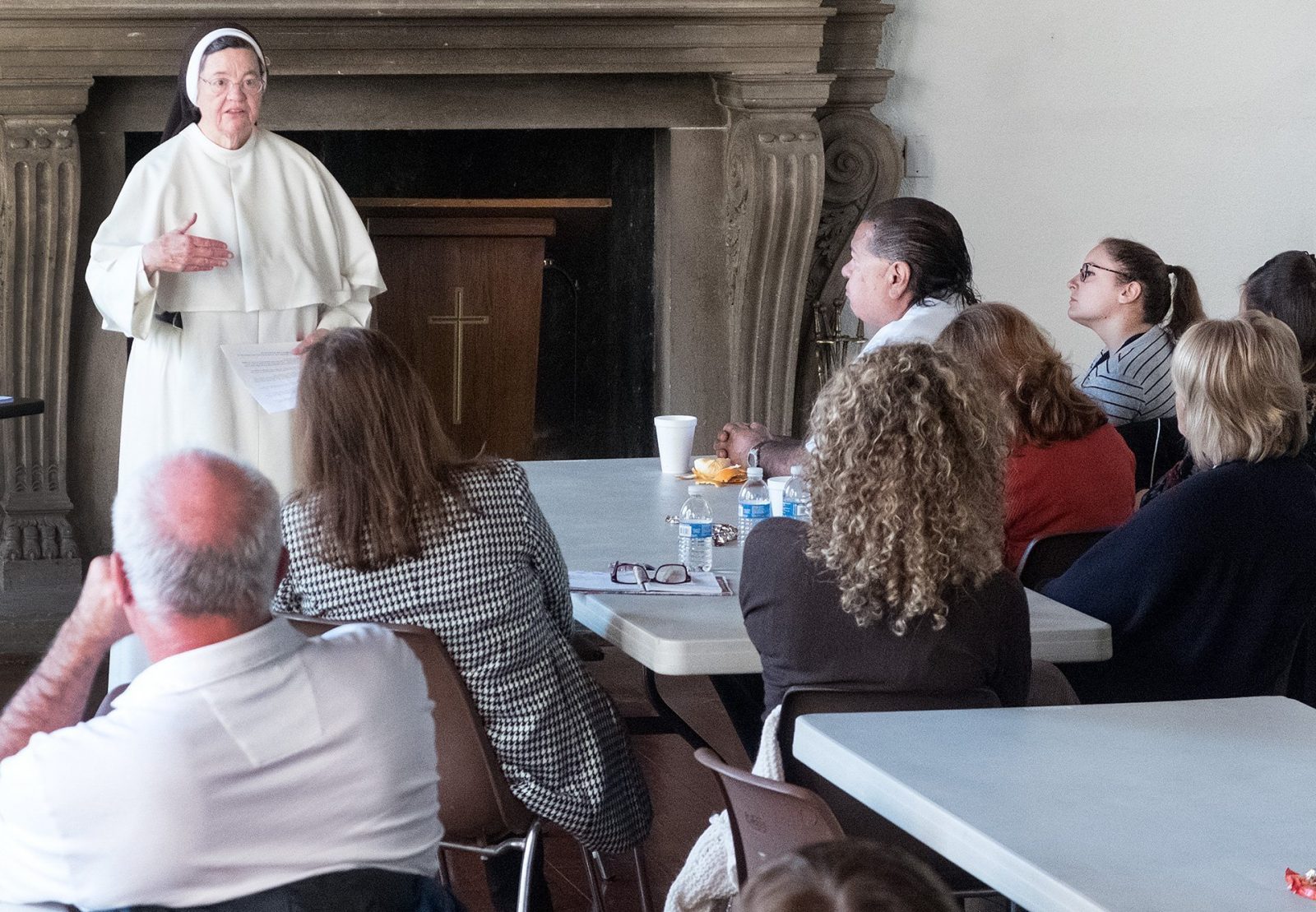 Dominican Sister Elizabeth Anne, director of the Center for Catholic Education, speaks to Catholic educators during an Oct. 20 conference in Auburn. (Courier photo by John Haeger)

When is a math teacher a religion teacher?

When that math teacher works at a Catholic school.

That riddle-like statement was part of the message Dominican Sister Elizabeth Anne shared with a diverse group of Catholic educators during a conference and retreat held Oct. 19-21 at Auburn’s Case Mansion. The event, titled “Educating Mind, Body, Soul,” was for the teachers, administrators and board members of local Catholic schools as well as directors of religious education and catechists from local parishes. The entire faculties of both Tyburn Academy of Mary Immaculate and St. Joseph School, both in Auburn, attended the conference led by Sister Anne, director of the Center for Catholic Education at Aquinas College in Nashville, and Jason Gale, director of Aquinas College’s Catechist Formation Program.

“Their talks were targeted to teachers in the schools and teachers in the parishes. This fulfilled the in-service day for the teachers, but then it also was opened to other people,” explained Ann Fallon, director of development at Auburn’s Tyburn Academy of Mary Immaculate, which sponsored the conference in conjunction with the Everest Foundation for Family Enrichment.

Sister Anne, a well-known speaker who gives presentations throughout the country on catechesis and educational methodology, spoke to the local educators about the mission of Catholic schools and reminded them that every person who teaches in a Catholic school, regardless of the subject, is a catechist, Fallon said.

“Sometimes you don’t hear about that very often. It was the whole idea that ‚Ä¶ every teacher, even if you’re teaching math and science, you’re still in that role as a catechist,” Fallon said.

This doesn’t mean these teachers talk about religion in every class, but they can incorporate the Catholic Church’s teachings and beliefs when opportunities arise, she said. Science teachers, for example, have ample opportunity to discuss Catholic teachings when they teach about creation or the Big Bang Theory, which was proposed by a scientist who also was a Catholic priest.

Gale, meanwhile, explained what the Catholic Church teaches about catechists and how it supports catechists.

Gale also talked about the spirituality of catechists and what catechists need to do for themselves to ensure they are able to fulfill their mission. This was a welcome topic for Conor O’Donnell, who teaches theology, history and philosophy at Tyburn.

“I think one of the really good reminders that I got at the conference is how important it is for the teacher or the catechist to have a good, thriving spiritual life, because you can’t give what you don’t have, and at the end of the day we’re all working on helping our kids get to heaven,” O’Donnell said. “It was a nice reminder because sometimes you get bogged down with all the grading and daily stuff. It’s really refreshing when they can come and just remind you of the dignity and mission of your job.”

The conference provided a valuable opportunity for educators to get away from the classroom and reflect about their mission, agreed Michael Carney, principal at St. Joseph School.

“The presenter, Sister Elizabeth, was excellent. We could have listened to her all day long, and I think she gave a great talk that motivated a lot of people,” Carney said. “Basically what she was trying to do was remind us of what it is we do and why we do it, helping us to remember who we are.”

The conference also provided opportunities for fellowship between the teachers from St. Joseph and Tyburn as well as the catechists from parishes in Auburn and the surrounding areas, Carney added. Representatives from both schools have been working together with Auburn’s director of religious education and members of Auburn’s Knights of Columbus and Champions for Life Sports Center for approximately a year and a half and plan to continue working together in the future, Fallon said.