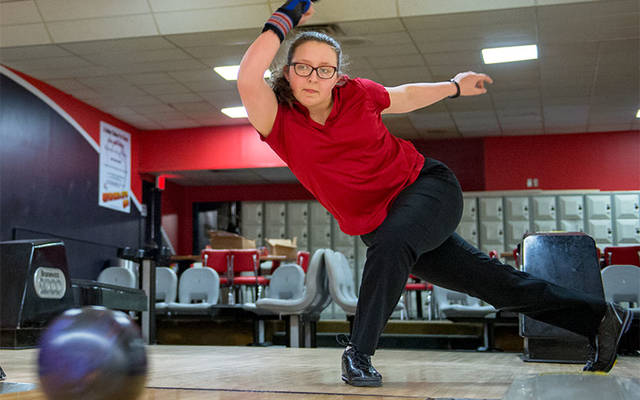 HILTON — Considering that a 200 game is a big milestone for many bowlers, Elena Carr’s 265 to open her Monroe County League high-school competition this past Dec. 11 was pretty impressive.

Actually, she was just getting warmed up.

Elena, a parishioner of St. Mark Church in Greece, proceeded to reel off 12 straight strikes for her first perfect 300 game — and there was still more extraordinary bowling to come.

With a 266 in the last of her three games, Elena achieved an 831 series — an average of 277 — to set a new national three-game record for high-school girls. According to the U.S. High School Bowling Foundation, the previous mark was 826 by Kristina Frahm of Illinois in 2007.

Elena recalled that upon arriving at Rochester’s Terrace Garden Lanes that day for her Hilton High School varsity match against Penfield, she never sensed what was about to occur.

“It just felt like a normal match. I was just going to have fun with my team,” she said.

In fact, Elena endured an open frame to begin the afternoon. But she threw nearly all strikes the rest of that game for the 265 — and from there, she said, her goal was “just try to stay consistent and not fall off.”

Stay consistent she did, and then some. The right-hander began her second game with nine straight strikes, then was forced to endure a delay when the computerized scoring system had to be readjusted. Yet she shook off that distraction and the mounting pressure, stringing three more strikes in the 10th frame — including a solid shot in the pocket on her final ball — for the coveted 300 game. Numerous cheers rang out behind her when the last pins fell, and she was immediately swept up in a bear hug by her older brother, Brad — who, incidentally, had just rolled his first 300 in September 2017.

Now she had to deal with the distraction of well-wishers congratulating her on the 300 while she attempted to bear down on her third game. Yet she managed just fine, reeling off the first seven strikes before finally leaving a 10-pin. By the final frame, Elena’s teammates had already researched online that the national three-game record was within reach. Soon afterward, when told that she had eclipsed it, she was in disbelief.

“I said, ‘No I didn’t, it’s not possible.’ It was really surreal. I was in total shock,” Elena said, adding that her historic feat was made even more special by the fact that “my mom, my brother, my entire team were there. Everybody I loved was there.”

Elena’s 300 game and 831 series shattered her previous best game of 279 and series of 745. Still only 14 years old, the Hilton High freshman averages in the low 200s, bowling five or six days per week and filling her weekends with various bowling leagues and tournaments.

Yet her intense involvement doesn’t come at the expense of her Catholic faith. Elena is an altar server at St. Mark and always finds time to attend Sunday Mass, whether she’s at home on the weekend or bowling elsewhere. In addition, Elena is actively involved in the parish youth group, helping out with such activities as Knights of Columbus fish fry dinners during Lent.

“You’ve got to be right with yourself and your faith before you can be right with other things in your life,” Elena stated, adding that she highly values her youth-group activities: “It’s a safe environment for us. We can be who we are, and we all believe the same thing.”

Elena noted that she’s open about her Catholicism at bowling as well. “People say, ‘Oh, that’s cool, where do you go to church, what religion are you?’ People are interested, not judgmental,” she said.

Being secure in her faith as well as her friendships, Elena said, helps her look to the future with confidence: “My mom taught me that if you surround yourself with good people you can trust, there’s no way you can go wrong in life.”

That life will most definitely include bowling; already Elena is eyeing colleges with strong bowling programs and hopes to someday earn a scholarship. Yet regardless of what lies ahead, she can always bask in the memory of her record-setting day of Dec. 11, 2017.

“I’ll do a Google search for the national record and see my name, and it’s still surreal to me. I still can’t believe it,” she said.