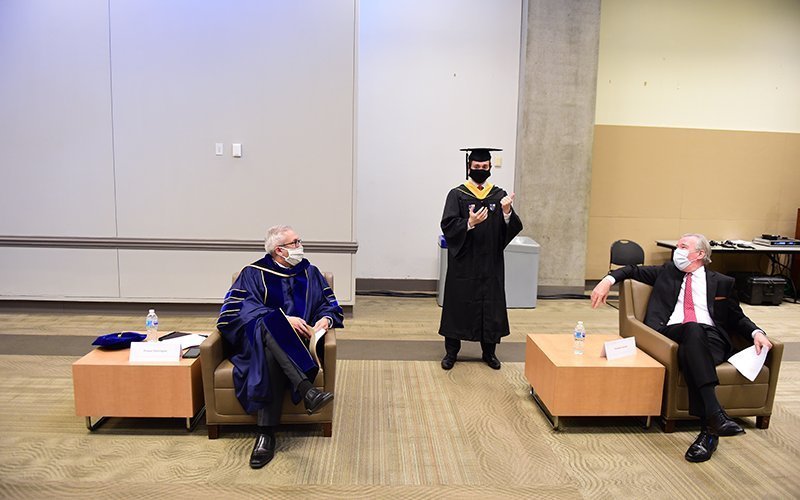 Brendan Dillon, a member of The Catholic University of America class of 2020 and president of the Student Government Association, chats backstage with John Garvey, right, the school's president, and Aaron Dominguez, provost, left, prior to the virtual commencement filming on the Washington campus May 16, 2020. (CNS photo by Patrick G. Ryan/courtesy The Catholic University of America)

School starts soon, and it will be unlike anything we have ever experienced. Catholic University will have only freshmen on campus. Other students begin classes on Zoom. We are more open than most other universities in town; except for our Brookland neighbor Trinity Washington, they are all virtual.

The District of Columbia requires people coming from 29 high-risk states to quarantine upon arrival. So our new students will spend their first two weeks in isolation, like astronauts do before a space flight. We’ll bring them their meals. I suppose we’re all getting used to wearing face masks, though it’s still uncomfortable the way they inhibit conversation and facial recognition.

These and other inconveniences will change daily life in unpleasant ways. Another effect of the virus is more episodic, but it will have a particular impact on the community life of the university: We can’t gather in crowds.

It’s taken me a while to appreciate how much this will affect our students’ experience, but as we make preparations for the school year , I’m coming to see its social importance. Consider a few examples. We begin the year with a Mass of the Holy Spirit in the Basilica of the National Shrine of the Immaculate Conception. The upper church seats 6,000 people. This year, we can have only 100.

Two weeks ago, Iwe canceled our fall sports season. No football games. No concerts either, like the one our seniors gave with Gustavo Dudamel in the Kennedy Center. No (or at least fewer) political assemblies. The NAACP won’t march on Washington this month. The March for Life is worried about January. There will be no dances. No reunions. All virtual.

We Americans think of ourselves as individuals, so the reflexive view of this restriction is that it’s like the quarantine, but on a larger scale. This is a mistake. There’s something different about big groups.

A college student who leaves his family begins to form his own sense of identity, and it’s not the autonomous self of psychological literature. It normally comes with a new sense of belonging — to a class, a school, a church, a culture, a country. I am my mother’s and father’s son, but I am also a Catholic, an academic, a Red Sox fan, a right-to-life Democrat, an American.

College football games and dances knit crowds together into groups united by bonds of friendship and common interest. Reunions are gatherings that reaffirm these ties. If you think the point is trivial, tell that to the class of 1970, who will celebrate their 50th college reunion this fall.

Sometimes, collective action takes a more coordinated form, and it can be a beautiful thing. You need a hundred musicians to play Beethoven’s Ninth Symphony; even more to play Mahler’s Eighth. In these virtual times, we can use apps like Soundtrap, GarageBand and Audacity to stitch voices together. But the experience is not the same for the performers. It’s playing together that brings joy.

When people gather for political purposes, their activity is protected by the Constitution. The First Amendment guarantees “the right of the people peaceably to assemble,” not for any reason at all, but “to petition the government for a redress of grievances.” (Think Black Lives Matter or the March for Life). This is obviously related to the freedoms of speech and the press, but the crowd adds something to those forms of expression. In a democracy, many voices count for more than one.

And of course, the church is a communion more sublime than any of these. Our relationship to God and his to us is not primarily individual and personal. We worship God as a church; and we are saved as his people.

If we’ve learned anything during this pandemic, it’s that as human beings, we are better when we live, work, pray and play together. I can’t wait until we can do that. Our students need it. We all need it.