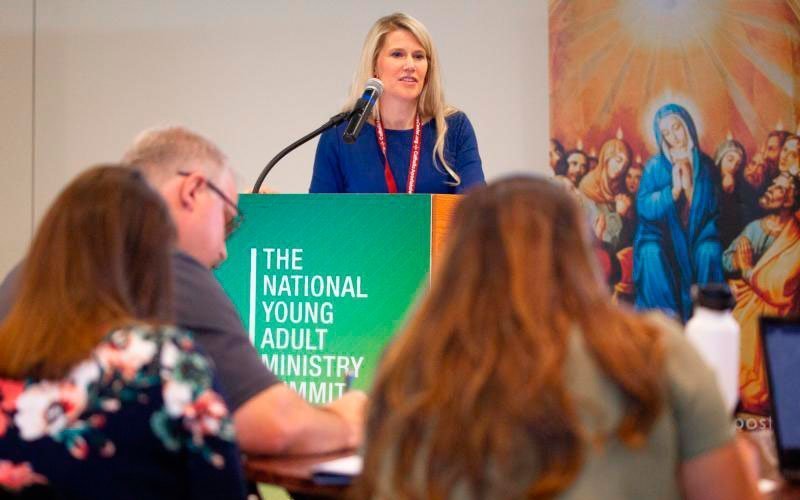 Sarah Yaklic, director of Grotto Network at the University of Notre Dame in South Bend, Ind., speaks during a breakout session May 16 at the National Young Adult Ministry Summit at the St. John Paul II National Shrine in Washington. (CNS photo by Tyler Orsburn)

WASHINGTON (CNS) — About 130 leaders of young adult ministries from more than 60 dioceses across the country gathered at the St. John Paul II National Shrine in Washington May 15-17 for the National Young Adult Ministry Summit to talk about the best ways to reach out to young adults.

The summit, coordinated by the U.S. Conference of Catholic Bishops’ National Advisory Team on Young Adult Ministry, was described by one young adult leader as “a unique moment in the history of the church” leading up to the October Synod on Young People, the Faith and Vocational Discernment.

Jonathan Lewis, the event’s chair and the executive director of evangelization, young adult ministry and chaplaincies in the Archdiocese of Washington, said there has historically been a strong culture of youth ministry in the life of the church, but there hasn’t been the same investment in professional ministry to young adults.

With recent cultural, social and economic shifts in society, young adults are often “living in an unstable season of life,” where they are managing debt, discerning their vocation and moving frequently, said Lewis.

The summit alternated between large plenary sessions and smaller breakout sessions on various topics such as digital outreach, the current realities in understanding and reaching Gen Z, just getting started with young adult ministry, intercultural competency and reaching young adults through current events.

“The thing I loved the most is it has been a conversation,” said Alison Pope, a parish leader from the Diocese of San Angelo in Texas.

Instead of having one expert who tells everyone what they need to do, Pope said summit participants acknowledged that no one really knew the answer, and they had “a true dialogue, with every voice being heard, whether it is considered ‘expert’ or not.”

“We were bleeding out the young church severely in Nevada,” said Christina Davis, the director of youth and young adult ministries in the Diocese of Reno. “When I went in our parishes, I rarely saw young people at all.”

After holding listening sessions in her diocese, they found that many young people felt unwelcome and did not think there was a place for them in the church.

While much of the conversation around young adult ministry centers on how to get those people to return to the church, one of the participants pointed out that “we need to have the same conversation about what to do to prevent them from leaving in the first place.”

The summit participants serve a wide variety of populations, with one priest coming from Fairbanks, Alaska, and serving native populations in his diocese, a few leaders from the Archdiocese of Military Services who serve young adults all across the world, and participants from cities such as Chicago and Boston, who serve a variety of cultures in an urban setting.

Even though the landscapes of their ministry look very different, Norbertine Father Graham Golden, from the Archdiocese of Santa Fe, New Mexico, said: “As diverse and different as all the communities we work in are, the kind of lens we bring is similar.”

“It really reinforced to me, as unique as the population you work with is, ministry is still ministry,” he said, adding that they all share the framework “to meet people where they are at” and then “to empower them to go out and share what they’ve encountered.”

Alejandra Bravo, a Hispanic youth and young adult ministry specialist from the Archdiocese of Denver, said the summit showed her that there is a need for integration and collaboration between leaders and that it is possible

“I’m very excited and hopeful,” she said. “Although we have different realities, we have similarities ‚Ä¶ we all have that desire to have an encounter with God. All young adults, regardless of race or ethnicity have that same desire.”

Many of the participants discussed the critical importance of strengthening young adults, so when they get married and have families they are prepared to pass the faith onto their children.

“If you strengthen young adults, you have stronger marriages, stronger families, more Baptisms,” and ultimately a stronger church, said Gabriela Karaszewski, from the Archdiocese of Galveston-Houston.

Christina Hannon, a young adult engagement officer for the Coalition With Young Adults from Cleveland, said since she is the only employee of her organization, the summit’s collaboration was helpful.

“It is amazing to see all the people across the country working on this in such diverse ways and such passionate ways,” she said. “It is encouraging to know I am not alone.”
– – –
Sankowski is on the staff of the Catholic Standard, newspaper of the Archdiocese of Washington.