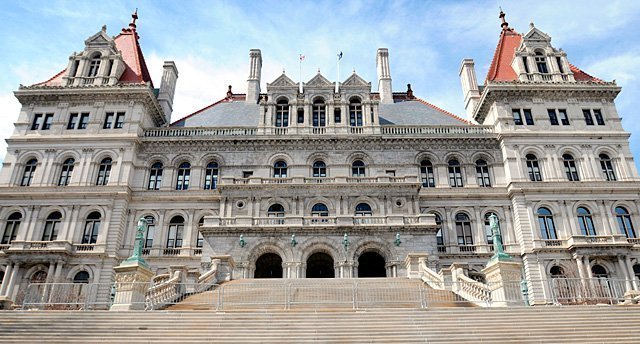 The New York State Capitol is seen in Albany in 2008. Local parishioners met with local representatives during the annual Catholics at the Capitol Day in Albany March 19.

EDITOR’S NOTE: The last name of a person in the story has been withheld to protect his privacy.

Farmworkers from the diocese of Rochester had a message for lawmakers: They need help from the state to ensure that their basic needs are being met on the job and in the fields.

"(Farmers) are supposed to have bathrooms and water for these people, and it’s not there," said Pedro R. Mares, a Catholic Charities outreach worker and program manager for La Casa, which serves migrant workers in Wayne County.

According to the New York State Catholic Conference, which represents the state’s bishops in matters of public policy, farmworkers are excluded from labor laws including overtime pay, a day of rest, collective bargaining, some public-health laws, and employer contributions to unemployment and worker’s compensation funds.

The diocesan farmworker contingent was among those advocating for the Farmworkers Fair Labor Practices Act (A1792/S1743) during the annual Catholics at the Capitol Day in Albany March 19, during which local parishioners meet with local representatives. Advocates noted that many farmers treat workers with fairness and exceed minimum requirements, but not all do.

In addition to advocating for farmworker protections, Catholics advocated for legislation for equal treatment for women that does not endanger life, educational investment tax credits, increased funding for the vulnerable and humane treatment for incarcerated individuals.

Mark Keller, a master’s of divinity student at St. Bernard’s School of Theology and Ministry in Pittsford and an intern with Catholic Family Center’s Director of Social Policy, Marvin Mich, said 39 people from the Rochester area and the Finger lakes traveled by bus to Albany for the day. An additional group also traveled separately from the Southern Tier.

Among the younger participants that day were Patrick Finnerty and Caroline Ronsivalle, sixth-graders at Elmira’s Holy Family Elementary School. They, their teacher, Apryl Clary, and principal, Lorie Brink, took part in Catholics at the Capitol along with people representing Catholic Charities of Chemung/Schuyler. The two students earned this right by winning an essay contest on why and how they wished to represent Catholic schools while in Albany.

According to Brink, her group met separately with Sen. Thomas F. O’Mara, Assemblyman Christopher S. Friend and Assemblyman Philip A. Palmesano in their offices. The Elmira contingent’s main thrust was supporting passage of an educational investment tax credit bill (S6808/A1826-C) that would award tax credits for people who make charitable donations for educational purposes. The bill also received a strong push during Catholics at the Capitol from New York Cardinal Timothy M. Dolan, who contended that passing the legislation would lead to increased scholarship donations and thus help low- and middle-class families receive Catholic education.

Brink said her students "did wonderfully" in presenting their views alongside the many adult participants. She added that Patrick and Caroline — who were visiting Albany for the first time — were intrigued not only by seeing the Capitol building but also taking part in what goes on inside it, visiting with the politicians and sitting in on a Senate hearing that day as well. In addition, Brink said the students enjoyed Mass at Cathedral of the Immaculate Conception that was celebrated by Cardinal Dolan.

Mass and meeting Cardinal Dolan were also highlights for Suzanne Stack, director of faith formation at the Church of the Nativity of the Blessed Virgin Mary in Brockport.

"That cathedral is so beautiful, and they sang in Latin," she said. "We got the full liturgical experience."

Stack met with Sen. Ted O’Brien, who she said was very attentive to the stories farmworkers in the group shared about difficult working conditions they have faced. Stack said the group also met with Assemblyman Joe Morelle’s chief of staff.

Stack said the group also conveyed to lawmakers how they support the nine points of the Women’s Equality Act that cover employment and discrimination protections for women, but they were opposed the 10th point, which the Catholic conference has said could be used to expand abortion throughout all nine months of pregnancy.

Dyllon also was able to speak to another issue: humane treatment of prisoners. The Catholic conference this year advocated for the compassionate release of sick or elderly prisoners who have a low likelihood of offending again, and it also is advocating for a reduction in the use of solitary confinement, especially for prisoners with mental-health issues that can be exacerbated by such confinement.

Other participants also drew on their own experiences as they met with legislators. As retired teacher and herself a product of Catholic schools, Joan McCadden is particularly concerned about support for Catholic schools and for the state’s Maternity and Early Childhood Foundation.

McCadden rose at 4 a.m. in order to board the Albany-bound bus in Weedsport at 6 a.m. The day was long and strenuous, but well worth her time and effort, she said during her bus ride back to Weedsport that afternoon.

"There are times when I’m not sure why I go, except the squeaky wheel gets the oil, and you need to stand up, speak out," said McCadden, who belongs to Our Lady of the Snow Parish in Weedsport. "It helps people know we’re active and supportive of our community."

McCadden and several other Catholics from the Finger Lakes area met with a handful of their representatives, including Assemblymen Bob Oaks and Gary Finch and Senators Michael Nozzolio and John DeFrancisco. McCadden, who met with Oaks, said he listened attentively for more than an hour as the lobbyists in her group explained their concerns.

Support for families and children is crucial, and students whose basic needs are met are more likely to succeed in the classroom, added Bernie Tomasso, who also is a retired educator.

Tomasso, who is pastoral minister at Ss. Mary and Martha Parish in Auburn, also spoke to his representatives about the need for more humane treatment of incarcerated individuals. He was pleased with his legislators’ attentiveness as well, he said.

"I believe the lawmakers don’t hear enough from us. We need to be involved with the government and let them know our views," he added.

A veteran Catholics at the Capitol participant, Tomasso was accompanied by two first-time lobbyists from Ss. Mary and Martha. Felix Mucedola and Paul Saltarello said their first trek to Albany was an eye-opening but enjoyable experience.

"I felt strongly about some of the issues that were being promoted, and it was an opportunity to talk to my representatives in a more intimate setting and let them know there are a lot of people who feel strongly about these things," Mucedola said. "Many of the travelers came long distances, and I’d like to think they did that because they felt passionately about the things they were discussing and the opportunity to talk with legislators."

Mucedola said the highlight of the day came when he met Cardinal Dolan before Mass.

"It was a real blessing … to really talk with him one on one," he said.

Tags: NY Catholics
Copyright © 2022 Catholic Courier, Inc. All rights reserved. Linking is encouraged, but republishing or redistributing, including by framing or similar means, without the publisher's prior written permission is prohibited.