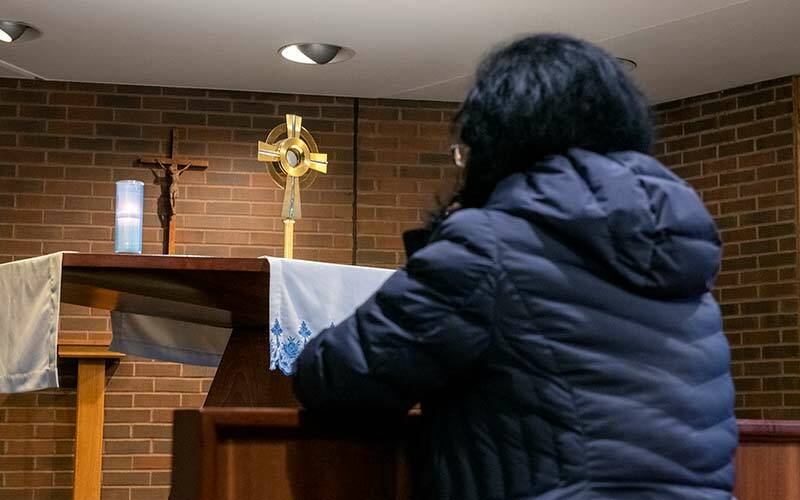 Carlota Frye kneels in prayer in front of the Eucharist May 19 in the perpetual-adoration chapel at St. John of Rochester Church in Fairport. (Courier photo by Jeff Witherow)

All three are forms of eucharistic adoration, a practice with deep roots in the Catholic Church, but which many Catholics do not fully understand, according to Father Peter Van Lieshout, rector at Sacred Heart Cathedral in Rochester.

Eucharistic adoration is the practice of spending time in prayer and adoration before a reserved, consecrated host that has been taken from the tabernacle and placed in a monstrance, a typically large and ornate vessel that protects the host while making it visible to worshippers.

Adoration: Rooted in the Real Presence of Christ in the Eucharist

Eucharistic adoration stems from Catholic doctrine that bread and wine become the body and blood of Jesus when they are consecrated during Mass, Father Van Lieshout explained. According to the Catechism of the Catholic Church, “the Eucharistic presence of Christ begins at the moment of the consecration and endures as long as the Eucharistic species (bread and wine) subsist” (1377).

“When the priest elevates the host, it’s a special moment at Mass. … I deliberately extend that kind of as long as I can without interrupting the flow,” Father Van Lieshout said. “I want that moment frozen in time longer, and that is the best explanation of why eucharistic adoration is so important. That brief moment of the elevation of the sacred host at Mass is not enough.”

It’s not uncommon for several consecrated hosts to be reserved in the tabernacle after Mass for adoration and so the Eucharist can be brought to sick or dying parishioners, Father Van Lieshout said. The catechism says these consecrated hosts must be treated “with the utmost care, exposing them to solemn veneration of the faithful, and carrying them in procession” (1378).

Eucharistic adoration arises from, reinforces faith in the Real Presence

Thanks to their belief in the Real Presence of Christ in the Eucharist, it is fitting for Catholics to spend time in adoration before the Eucharist, which, in turn, reaffirms their belief, Father Van Lieshout said. In adoring the Blessed Sacrament, Catholics prove that they believe Jesus literally meant what he said in telling the apostles that the bread he was giving them was his body, even though it still looked like bread.

“You are making a renewed effort at faith, (saying), Jesus, I believe what you said is true,” Father Van Lieshout said.

Adoration can feel somewhat awkward at first even for Catholics who fully believe in the Real Presence, he said, noting that many people are uncertain about what to do when they first attempt to spend time with the Blessed Sacrament.

“Like so many things, you just have to become comfortable and used to praying in front of the Blessed Sacrament,” said Father Van Lieshout, who recommends that Catholics initially commit to going to adoration a set number of times. After reaching their initial goals, they can look back on their experiences and see how those times of prayer helped them or influenced their lives, he said.

Read, reflect on Gospel passages before the Blessed Sacrament

For Catholics who are unsure of how to pray during eucharistic adoration, Father Van Lieshout also recommended bringing a Bible in order to read and contemplate Gospel passages while before the Blessed Sacrament.

“That’s the unique thing. You want to use the Scriptures to elicit these acts of faith and hope and love and contrition for sins, pouring those out to Jesus who is right there,” Father Van Lieshout said.

The experience can be spiritually therapeutic, he added.

“We have all these feelings of inadequacy, all these hurts, all these people I feel like don’t understand me. There’s this whole internal dialogue that we have and we keep within ourselves,” Father Van Lieshout noted. “Prayer in general is meant to sort of interrupt that and bring the Lord into that. It’s so much easier and so much more tangible when we do that in the presence of the Blessed Sacrament.“

Tags: Eucharistic Revival, Why do Catholics?
Copyright © 2022 Catholic Courier, Inc. All rights reserved. Linking is encouraged, but republishing or redistributing, including by framing or similar means, without the publisher's prior written permission is prohibited.