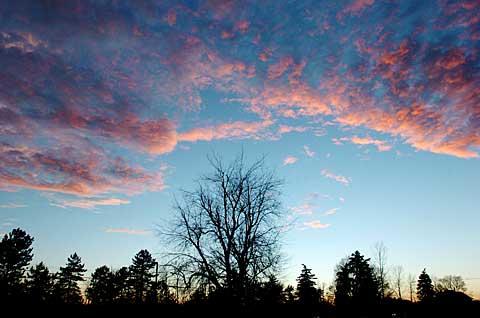 The Diocesan Public Policy Committee's Energy Education Subcommittee recently asked Catholics to commit to being good stewards of the earth.

The feast day of St. Francis of Assisi on Oct. 4 is the perfect time for Catholics to commit to being good stewards of the earth and all of God’s creation, according to members of the Diocesan Public Policy Committee’s Energy Education Subcommittee.

"Parishes are invited to join Bishop Matthew Clark in signing the St. Francis Pledge, committing ourselves to learn, reflect, pray, act and advocate to be good stewards of the earth," Father Brian Cool, chair of the diocesan committee, wrote in a Sept. 8 letter to parish staff, social-ministry leaders and religious educators.

Both Father Cool’s letter and the St. Francis Pledge are part of a packet of resources made available to parish leaders in order to stimulate faith-based reflection on energy issues and climate change, which are the Diocesan Public Policy Committee’s education topics for 2010-11. The diocesan committee also chose advocating for the poor as this year’s advocacy issue, and opposition to the Reproductive Health Act as an educational priority.

Those who sign the St. Francis Pledge promise to pray and reflect on their duty to care for God’s creation and protect the poor and vulnerable; learn about and educate others on the causes and moral dimensions of climate change; and assess their own energy use, consumption and waste. They also pledge to act to reduce the ways they contribute to climate change and advocate for Catholic principles and priorities in climate-change discussions, especially as they impact the poor and vulnerable. These resources may be found at www.dor.org/charities/dioprograms/AdvocacyGlobalClimateChange.htm.

Throughout his five-year pontificate, Pope Benedict XVI has encouraged Catholics to view the issue of stewardship through the lens of their faith, especially when making personal, communal and legislative decisions regarding the use of natural resources.

"Pope Benedict XVI has led the way in our Catholic response to environmental issues and is quickly becoming known as the ‘green pope’ for his earth-friendly renovations at the Vatican," Father Cool wrote in the letter. "As Catholics, we believe that God entrusted the earth to humans for the good of all. History is replete with examples of how we have not lived up to the trust we have been given by God."

These failures have resulted in polluted waterways, smog-choked air and soil poisoned beyond use, the priest stated. Such conditions are harmful to everyone, but usually have the most devastating effects on the poor, he added.

Communities around the globe are facing tough choices as they decide how to respond to the growing demands on the earth’s resources and fragile ecosystem, and local communities are no exception.

In recent years wind turbines have been a hot topic of debate in parishes throughout the diocese, from the shores of Lake Ontario to the hills of Cohocton and Naples. Another hotly contested issue in the Southern Tier is high-volume horizontal slickwater hydraulic fracturing — often referred to as hydrofracking — which is a form of drilling that uses high volumes of water to fracture rock in order to release the natural gas below.

"We struggle with the wisdom of hydrofracking to obtain natural gas, wind turbines on our hills and in our waterways, as well as legislative efforts to reduce carbon emissions," Father Cool wrote. "Calling upon the intercession of St. Francis, let us ask to be guided by the spirit to care for creation as Francis himself did and to see with eyes of faith our call by God to good Stewardship of Creation."