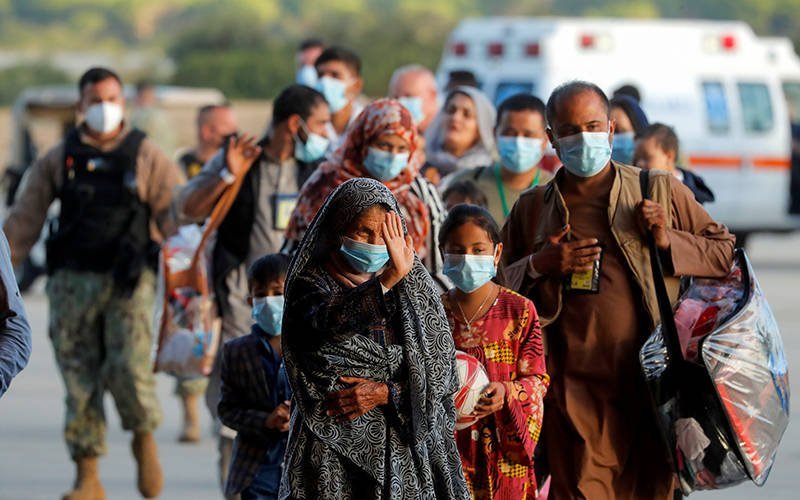 Pope: Not all ‘eventualities’ considered in Afghanistan withdrawal

WASHINGTON (CNS) — As Aug. 30 ended in the U.S. and a new day began in a different time zone in Kabul, Afghanistan, on Aug. 31, 2021, the U.S. Central Command released a green-tinted photo of a soldier about to get on a cargo plane, a photographic coda to seal the historic moment that put an end to nearly two decades of U.S. military presence in Afghanistan.

Though many were quick to call it “the end” of the United States’ longest war, it’s too early to tell what, if any, involvement may continue in the now Taliban-controlled nation since some U.S. citizens remain there.

U.S. Secretary of State Antony Blinken said “under 200 and likely closer to 100” U.S. citizens are still in Afghanistan.

“We did not get everyone out that we wanted,” said Gen. Kenneth McKenzie, head of U.S. Central Command announcing the withdrawal on Aug. 30 in the U.S., reminding reporters listening that it was Aug. 31 in Afghanistan, fulfilling the date the U.S. had set for the withdrawal.

But there are some U.S. citizens in the country, he said, who because of family or other ties, did not want to leave Afghanistan. Others were not able to make it to the airport in time for the last U.S. plane out.

The administration of President George W. Bush sent troops to Afghanistan after the Sept. 11, 2001, attacks that left 2,996 dead on U.S. soil, trying to pin down al-Qaida militants who planned the hijacking of airplanes, including Osama bin Laden, who was believed to be in and out of Afghanistan hiding with help from the Taliban.

U.S. troops remained there under previous administrations from both political parties and in October 2020, President Donald Trump tweeted that he would withdraw U.S. troops from Afghanistan by Christmas. President Joe Biden continued with the plan but with a different timeline. However, analysts have blamed the four previous administrations — from George W. Bush to Biden’s — with the unfolding drama.

Gen. McKenzie said U.S. military had evacuated 79,000, including 6,000 U.S. citizens from the Kabul airport since Aug. 14, after the Afghan military collapsed following the imminent withdrawal of U.S. troops and contractors.

“The evacuation from Kabul is coming to an end. A larger crisis is just beginning,” warned the United Nations High Commissioner for Refugees Filippo Grandi on Aug. 30.

“The evacuation effort has undoubtedly saved tens of thousands of lives, and these efforts are praiseworthy. But when the airlift and the media frenzy are over, the overwhelming majority of Afghans, some 39 million, will remain inside Afghanistan. They need us — governments, humanitarians, ordinary citizens — to stay with them and stay the course,” Grandi said in a statement.

Catholics in the U.S. joined faith leaders from the Interfaith Immigration Coalition, who, in an Aug. 30 letter, urged Biden to “take full responsibility for protecting the lives of thousands of Afghan allies that worked alongside U.S. forces, as well as provide robust protections for vulnerable populations in Afghanistan…”

As the Biden administration pivoted its future in Afghanistan from a military operation to a diplomatic one, the interfaith coalition urged the U.S. government to help.

“If ‘human rights must be at the center of our foreign policy, not the periphery,’ as you stated in (your) address to the American people and to the world, the United States must stand behind its promises…,” the interfaith coalition said in its statement.

“We are called by our sacred texts to love our neighbor, accompany the vulnerable, and welcome the sojourner… Our places of worship and faith communities stand ready to welcome all Afghans in need of refuge,” the group added.

Others, such as the Catholic organization Pax Christi USA, criticized the Biden administration for a drone strike Aug. 29 against suspected suicide bombers, which resulted in explosions that led to the death of 10 civilians, including children.

“Pax Christi USA calls on the Biden administration to cease the use of lethal drones,” the organization’s executive director, Johnny Zokovitch, said in an Aug. 30 statement.

“Such indiscriminate killing just furthers the cycle of violence, undermines real human security and traumatizes survivors. What we are seeing now after 20 years of military occupation in Afghanistan should, at the very least, cause our leaders to pause and question to what end more arms, more bombs, and more death will lead.”

The administration ordered the strike after blasts near the Kabul airport, carried by suicide bombers, killed 13 U.S. service members on Aug. 26.

In a televised late afternoon speech on Aug. 31, Biden said “it was time to end this war” in Afghanistan a long time ago. It was something past presidents had promised but did not carry out.

“I refused to open another decade of warfare in Afghanistan,” he said, adding that he did not want “to send another generation of American sons and daughters to fight a war that should have been done long ago.”

Civilian and military advisors counseled him to end this war as it didn’t serve any vital interest to the U.S., he said, which at one point had been ensuring that Afghanistan could not be used by those wanting to attack the U.S.

“We delivered justice to bin Laden, al-Qaida was decimated,” he said.

He also took ownership and responsibility for his decision.

“As we close 20 years of war and strife and pain and sacrifice, it’s time to look to the future, not the past,” he said. “I give my word with all of my heart: I believe this is the right decision, a wise decision and the best decision for America.”

Tags: Refugees
Copyright © 2022 Catholic Courier, Inc. All rights reserved. Linking is encouraged, but republishing or redistributing, including by framing or similar means, without the publisher's prior written permission is prohibited.