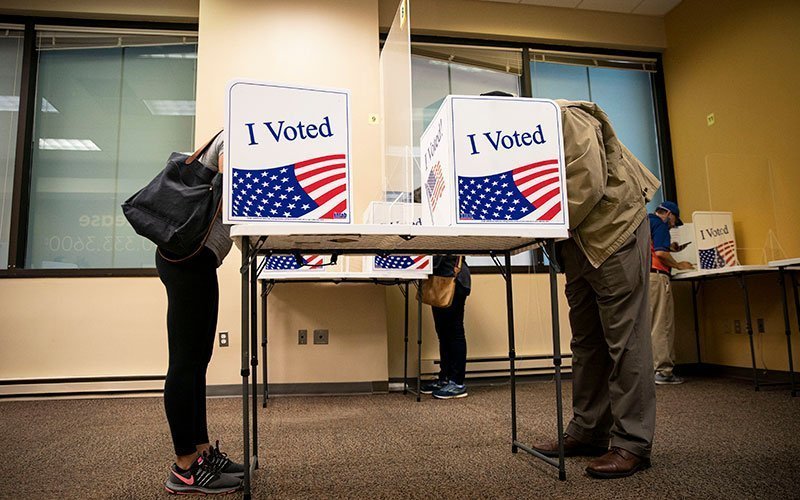 People fill out their ballots at an early voting site in Arlington, Va., Sept. 18, 2020. (CNS photo by Al Drago, Reuters)

ALBANY, N.Y. (CNS) — The envelope read: “There is a war on Catholics and Faith in God.”

Inside the mailer was “The 2020 Elections Catholic Voter Survey,” distributed by the organization CatholicVote, which wants to poll “1,000,000 eligible Catholic Voters … on the Left’s War on Catholics and Faith in God.”

When completed, the report will be “distributed to President (Donald) Trump and his top advisers … members of Congress … radio talk show hosts,” the mailer said.

CatholicVote is seeking information as well as donations. But the mailers that many Catholics in the Diocese of Albany and elsewhere have received have left them with more questions than answers: Was this survey put out by the Catholic Church? Was it approved by the diocese? Is the church telling us who to vote for?

The questions point to the difficult and demanding job Catholics have when faced with how to decide whom to vote for in an election. Some want their bishops and pastors to come out and tell them who should get their vote.

However, such a step is not something the Catholic Church can do, as the U.S. Conference of Catholic Bishops’ explains in its quadrennial document “Forming Consciences for Faithful Citizenship: A Call to Political Responsibility.”

“Obviously, the church is a tax-exempt entity and so we are governed by the IRS rules and guidelines. We can’t get involved in partisan politics, which means we can’t endorse one candidate or oppose another candidate,” Kathleen Gallagher, director of pro-life activities for the New York State Catholic Conference, said.

“That is the beauty of it, that the church gives it to us with our free will to form our own consciences and use our own prudence and good judgment to make these difficult decisions,” Gallagher told The Evangelist, newspaper of the Diocese of Albany.

CatholicVote is a nonprofit, political advocacy group that is independent of the church. The organization in mid-September launched a $9.7 million advertising blitz in swing states in support of President Donald Trump’s reelection.

Other efforts are underway to turn out the Catholic vote for Democratic presidential candidate Joe Biden, himself a Catholic. They include Catholics for Biden, Catholic Democrats and Vote Common Good.

“There are a lot of groups out there that put the word Catholic in their name but people have to dig deeper than that because they don’t officially represent the Catholic magisterium or the hierarchy of the Catholic Church,” Gallagher said.

To guide discernment on voting, Gallagher pointed Catholics to the bishops’ “Faithful Citizenship” document, which incorporates the tenets of Catholic social teaching to guide an individual’s moral framework when it comes to choosing a candidate. Notably, it does not tell anyone who to vote for and explains that “as Catholics we are not single-issue voters.”

“We are urged and called to examine all of the issues, the broad gamut of issues. But all issues are not of equal moral weight, right? Some issues have a special claim on our conscience, the bishops say. And abortion, they call it a preeminent priority. Why do they do that? They do that because abortion threatens life itself,” Gallagher said.

“So, of course, we have to give that strong moral weight, but at the same time our bishops say that’s not an excuse to dismiss other issues,” she continued. “No issue is optional for the Catholic voter. Assistance to immigrants and promoting racial equality and all of these issues that are on the front burner right now, we have a responsibility to examine. Where do the candidates stand on these issues, what are the party positions on those issues?”

If that isn’t dizzying enough, the temperament and mentality of the candidate should be added into the decision.

“Our bishops also say character and integrity of candidates counts,” Gallagher said. “We should put that into the mix as well, not just their positions on the issues.”

In an extremely polarized world, where both sides are predicting catastrophic results if either Trump or Biden is elected and where social media is filled with hate and misinformation, it is difficult not to look at the issues with a biased eye.

“We all have a political lens that colors how we see the world. But our faith says try to look through your faith lens first,” Gallagher said.

She also pointed to the Catechism of the Catholic Church as providing additional guidance.

“The catechism tells you there are three main responsibilities of Catholic citizens and they are: to pay taxes, to defend the country and to vote,” Gallagher explained. “All of those responsibilities are really putting the emphasis on the other guy. … Our faith says we are doing it for our brothers and sisters.”

Matvey is editor of The Evangelist, newspaper of the Diocese of Albany.