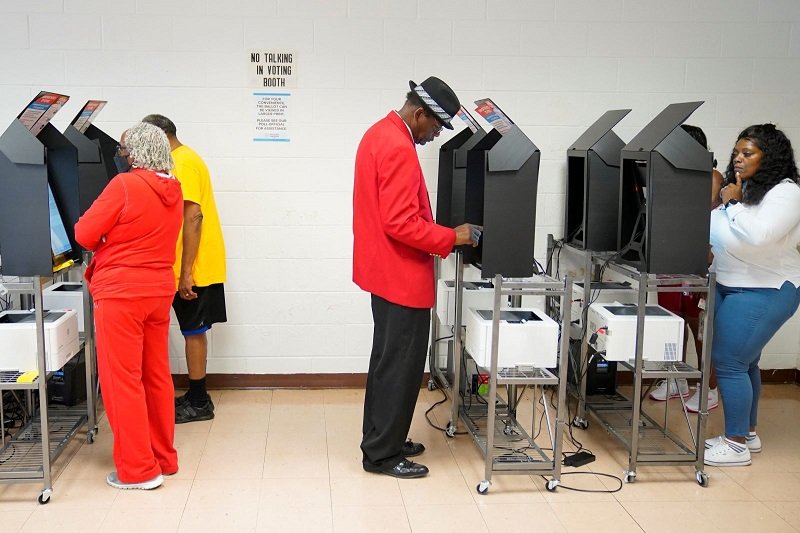 WASHINGTON (CNS) — “A good Catholic meddles in politics, offering the best of himself, so that those who govern can govern.”

With the U.S. midterm elections just around the corner, it seems timely to recall these words from a homily Pope Francis delivered at a daily Mass in 2013.

The pope also reminded Catholics of the church’s social teaching that politics serves the common good and is “one of the highest forms of charity.”

Bishop Andrew H. Cozzens of Crookston, Minnesota, quoted the pope in a recent column on the elections and the faithful’s civic duty to vote.

“Civic engagement is part of the task of discipleship. It is part of the vocation of all God’s faithful who are called by Jesus to be the ‘salt of the earth’ and the ‘light of the world,’” the bishop wrote in his column in Our Northland Diocese, Crookston’s diocesan newspaper.

“Though contemporary politics may indeed be distasteful at times, and darkened by a flawed understanding of the human person, this is all the more reason for Christians to bring the good news into public life in whatever way we can,” he said. “This is not a duty that any of us can delegate.”

“The Catechism of the Catholic Church reminds us that it is every person’s responsibility, as far as possible, to promote the common good through participation in public life,” he added.

Abortion, economy on the midterm-elections ballot

Voters also will face a host of ballot initiatives, from tax questions to education reform to how to address homelessness.

Abortion is on the ballot in five states: California, Michigan and Vermont have proposed constitutional amendments to affirm “a right to abortion and reproductive freedom.” A “yes” vote on Kentucky’s measure would guarantee there is no constitutional right to abortion in that state. The Montana measure would require doctors to try to save the life of infants “born alive at any state of development.”

Polls show that the economy is a top issue for voters. They’re worried about the rising cost of food and other goods, gas and housing.

A recent survey of Catholics by RealClear Opinion Research in partnership with EWTN showed that 89% of them feel their finances “had been significantly impacted or affected to some degree by the rising cost of gas and other goods,” said a July 14 analysis by RealClear Politics.

Another top issue among voters is the nation’s crime rate. In its mid-year crime report released July 28, the Council on Criminal Justice said homicides and some other violent crimes dropped slightly for the first half of 2022, but the homicide rate was still 39% higher than it was during the first half of 2019.

Thefts and robberies in major cities increased by around 20% in the same time period, according to the council, which examined crime data from 29 cities.

Voters also say they are concerned about energy policy, immigration, and a surge in drug overdose deaths involving fentanyl and methamphetamine coming across the U.S.-Mexico border.

On Oct. 19, U.S. Customs and Border Protection reported that since the beginning of fiscal year 2022, Border Patrol agents in the San Diego sector alone seized more than 1,000 pounds of fentanyl, an approximate 200% increase over the previous year.

The RealClear Opinion/EWTN national survey showed that 59% of all Catholics feel “the country is on the wrong track, including 68% of white Catholics and 45% of Latino Catholics, compared to 24% who thought it’s headed in the right direction,” the RealClear Politics analysis said.

It added that on average, most recent polls by RealClear Politics show that 75.1% of all voters “believe the country is off course,” with just 18% saying “it’s on target.”

This survey of 1,757 Catholic likely voters was conducted online in English and Spanish from June 15 to 23.

It showed 65% of Catholics “acknowledged that abortion conflicts with Catholic teaching and that a vast majority of Catholics oppose unfettered access to abortion,” said the analysis by RealClear Politics. “In the last two years, though, slightly more of these voters have shifted away from the church’s strict opposition to abortion.”

To help Catholics sort through the ballot issues and their choices for public offices, the U.S. bishops offer guidance in their quadrennial election document, “Forming Consciences for Faithful Citizenship: A Call to Political Responsibility.”

It does not tell Catholics how to vote but how to “form their consciences, apply a consistent moral framework to issues facing the nation and world, and shape their choices in elections in the light of Catholic social teaching.”

The document has been offered as a guide to Catholic voters every presidential election year since 1976. It has been updated and revised at four-year intervals to reflect changes in the issues confronting the country since it first appeared.

The first part outlines the responsibility of Catholics to incorporate Catholic teaching as they consider their vote as well as their support for myriad public policy issues that confront society.

During their general assembly in November 2019, the U.S. bishops approved a new introduction for “Faithful Citizenship.”

It reminds Catholics that “we bring the richness of our faith to the public square” and that “faith and reason inform our efforts to affirm both the dignity of the human person and the common good of all.”

“We recognize that the thrust of the document and the challenges it addresses remain relevant today,” the introduction says. “At the same time, some challenges have become even more pronounced. Pope Francis has continued to draw attention to important issues such as migration, xenophobia, racism, abortion, global conflict, and care for creation. In the United States and around the world, many challenges demand our attention.”

“The threat of abortion remains our preeminent priority because it directly attacks life itself, because it takes place within the sanctuary of the family, and because of the number of lives destroyed,” it says.

“At the same time,” it continues, “we cannot dismiss or ignore other serious threats to human life and dignity such as racism, the environmental crisis, poverty and the death penalty.”

“Everyone living in this country is called to participate in public life and contribute to the common good,” it adds.

A PDF of the document in English and Spanish is posted on the U.S. Conference of Catholic Bishops’ website at faithfulcitizenship.org, along with additional resources.

On the USCCB’s YouTube channel are five videos in four languages — English, Spanish, Tagalog and Vietnamese — that explore various aspects of Catholic social teaching while reflecting the teaching of Pope Francis.