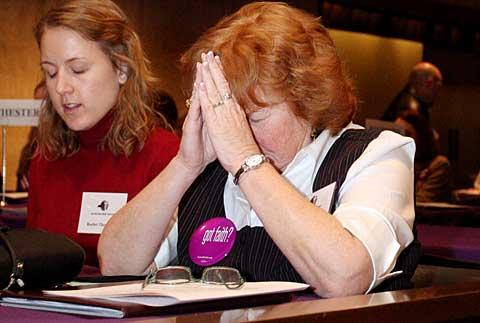 The New York State Catholic Conference’s annual Public Policy Day traditionally is a very long and tiring day for participants, many of who wake at the crack of dawn and in the early-morning hours board a bus bound for Albany. After Mass and several hours of lobbying local legislators, the participants board the bus again, and Rochester-area participants usually arrive home in the early evening.

Public Policy Day 2010, which was held March 9 at the state capitol, was no exception.

"The day was long, as usual, but good," noted Carol May, a member of St. Maximilian Kolbe Parish in Ontario, Sodus and Sodus Point.

This day’s events kicked off with a workshop presented by New York’s Archbishop Timothy Dolan, who presented a brief overview of Catholic social teaching. Later in the day Father Larry Snyder, president of Catholic Charities USA, gave a presentation about various ways to extend advocacy efforts after Public Policy Day. May said Archbishop Dolan’s talk proved to be the perfect way to start the day.

"It felt like you were at a pep talk, and got you ready to get out there," she remarked.

After listening to Archbishop Dolan, May and several other Catholics from the Finger Lakes area visited Assemblyman Bob Oaks (R, C-Macedon) in his office. They explained the Catholic Church’s position on a variety of issues, especially the restoration of funding for the Maternity and Early Childhood Foundation.

The lobbyists also explained that Catholics are called to look out for the poor and vulnerable among them, who have no voice of their own in the political arena, and urged legislators to keep those people in mind as they work to pass a state budget, May said.

"There is no simple answer. There are so many facets and sides to it," she said. "Our main objective today is to acknowledge the difficulty of (legislators’) jobs, but also to say you need to keep in mind that asking the poor and vulnerable to pay more than they are, because they’re at their limits now, comes back on our society in a negative way."

May said she and her fellow lobbyists realize legislators have to consider the needs of all of their constituents and various points of view.

"We all recognize it’s just plain going to be hard," said Ruth Putnam Marchetti, justice-and-peace director for Catholic Charities of the Finger Lakes and Wayne County.

Nonetheless, Finger Lakes-area Catholics were grateful for the chance to meet face-to-face with Oaks, and later in the day with Sen. Michael Nozzolio (R-Seneca Falls).

"I thought they were very positive. They really listened," May said.

Deacon Timothy Sullivan, executive director of Catholic Charities of Wayne County, also relished the opportunity to speak with Oaks and Nozzolio. Public Policy Day provides an amazing and rare opportunity to have that personal interaction with elected officials, he said.

"You develop a rapport with them, and they respect the Catholic Church and what it does to help people through Catholic Charities and the various outreaches. (The church) has tremendous credibility, which is good," Deacon Sullivan said.

Alana Schrader, youth minister of St. Mary of the Assumption Parish in Scottsville and St. Vincent De Paul Parish in Churchville, got some teens from her parishes involved in the lobbying efforts. She said they spoke with a representative of Democratic Assemblywoman Susan, who represents Rochester and other parts of Monroe County, about restoring funding to the Maternity and Early Childhood Foundation, noting that the program may prevent subsequent health problems and dependence on public assistance and may offer women alternatives to abortion.

Marcia Des Jardin of Chili, a St. Vincent De Paul parishioner and student at Churchville-Chili High School, said she felt like she had made a difference during the day.

"It was nice that you can be a part of church and get your views out there," she said.

Two women from Blessed Trinity/St. Patrick parishes in Tioga County made their views known to two legislators from their region. Ellen Keough, pastoral associate at Blessed Trinity/St. Patrick, and parishioner Glenna Wickline, both members of the parishes’ social-justice committee, were among the participants who met with Sen. Thomas Libous and Assemblyman Gary Finch.

Keough said that during an extended discussion with Finch she stressed the need for the state to remit promised reimbursements to Catholic schools and offer educational tax credits to families. According to the state Catholic conference, New York’s Catholic schools are currently entitled to an additional $243 million from the state government. This issue hits home for Keough because St. Patrick School in Owego, the only Catholic school in Tioga County, is trying to turn the corner after having nearly closing two years ago.

"That’s a fairly sizable chunk of our budget that we, as a Catholic school, extend to meet state standards — and then they’re not reimbursing you to do that," Keough said.

Catholic-school concerns also ranked high for Elizabeth Berliner, principal of Holy Family Middle School, who traveled to Albany with two of her eighth-grade students, Marissa Brannick and Megan Herrick. They were a part of small groups that met with Assemblyman Tom O’Mara and an aide to Sen. George Winner. Berliner said she was impressed by the large amount of time that O’Mara and the aide gave.

"I don’t think the girls believed politicians would sit down and listen to their concerns like that," she said.

Despite potential differences of opinion between participants and legislators, Keough said the atmosphere remained respectful throughout Public Policy Day.

"Everybody was very civil regardless of how anybody felt on the issues," she said.

And in some cases, legislators indicated that although they may share with local Catholics the same views on certain issues, the state’s dire fiscal crisis left little room to expand or preserve services. This was the message that Brigit Hurley, a member of the diocesan Public Policy Committee and parish social-ministry coordinator for Catholic Family Center, received from Republican Assemblyman Joe Errigo, who represents parts of Monroe, Livingston and Ontario counties. Republican Assemblyman Bill Reilich, who represents parts of Greece, Ogden and Sweden, said the same thing, according to Irene Goodwin, pastoral administrator of St. Mary of the Assumption Parish in Scottsville.

"He could not make any promises (of being able to expand or preserve services)," Goodwin noted of Reilich.

In between meetings with legislators, many of the local participants attended a Mass celebrated by Archbishop Dolan.

Putnam Marchetti said she was impressed by the archbishop’s "down-to-earth and on point" homily. During that powerful homily, the archbishop told participants that the Mass was by far the most meaningful thing they would do that day, a sentiment Deacon Sullivan shared.

"The liturgy, the Eucharist, which is something that we all share as Catholics, that really provides the fuel for everything that we do in the church," Deacon Sullivan said. "To think that in the state capitol the church is celebrating the Eucharist, that’s kind of a mindblower right there."

"To see a Mass in a convention center concelebrated by the all the bishops of New York — it was just an inspiring experience, really," Berliner said.

May said she was inspired by the throngs of people around her who shared her Catholic beliefs as well as the belief that their voices would be heard and they could make a difference.

"When you look back on the various things that have changed (in the state), you can say maybe that was because we did this," May said.