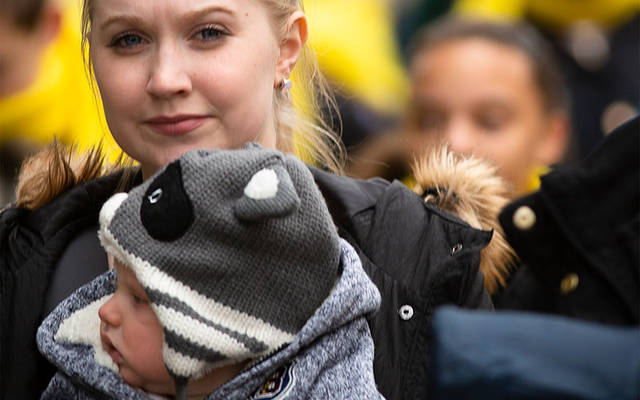 A mother marches with her baby during the annual March for Life rally in Washington, D.C., Jan. 24, 2020. (CNS photo by Tyler Orsburn)

In April, while much of the public’s attention was focused on the global pandemic caused by COVID-19, New York state made it legal to pay a woman to gestate and deliver a child for a prospective parent, provided that the egg used in the creation of the embryo is not from the surrogate mother.

The legalization of commercial surrogacy was included in the Education, Labor and Family Assistance Bill that, as a part of the state’s 2020-21 budget, was passed April 2 by both the Senate and Assembly and signed by Gov. Andrew Cuomo the next day. The law will take effect Feb. 15, 2021.

“This extremely complex legislation was buried deep within hundreds of pages of the state fiscal year 2020-21 state budget and enacted during a health pandemic in which the state Capitol was locked down,” noted Kathleen Gallagher, director of pro-life activities for the New York State Catholic Conference. “My educated guess is that the vast majority of lawmakers, except for the few who had an ongoing interest in this topic, had no idea of the details. That is not a responsible or transparent way to enact public policy, particularly on a social — not fiscal — issue that has so many medical, moral and legal implications.”

The Catholic conference, which represents the state’s Catholic bishops in public-policy matters, has long opposed compensated surrogate-parenting contracts, which had been prohibited in New York since 1992. The practice involves creating embryos in a laboratory by in-vitro fertilization, using eggs and sperm that may or may not be from the intended parents, and transferring them to the uterus of a surrogate mother, according to the Catholic conference’s 2019 memo of opposition to a similar bill intended to legalize commercial surrogacy.

“This woman (the surrogate), who is genetically unrelated to the child, will then bear that child with the intent of relinquishing the child at birth to the ‘intended’ parent or parents, pursuant to a monetary contract,” the Catholic conference wrote.

Such an arrangement is fraught with danger both for surrogate mothers as well as the resulting children, who are treated as commodities to be manufactured, bought and sold, the Catholic conference argues. The practice exploits impoverished women willing to serve as surrogates and is vulnerable to being used for human trafficking, the conference noted in its 2019 memo of opposition.

Most other democratic nations throughout the world “have outlawed the practice because of the exploitation of women and commodification of children that inevitably results from the profit-driven surrogacy industry,” Gallagher wrote in an April 3 statement.

Moreover, the Catholic Church opposes surrogacy even when profits are removed from the equation, she told the Catholic Courier in September. This means that even so-called altruistic surrogacy, through which women volunteer to act as surrogates in order to help couples struggling with infertility bring children into the word, flies in the face of church teaching.

“Put simply, our church teaches that surrogacy is immoral because it replaces the natural act of unitive and procreative love, within marriage, to achieve pregnancy,” Gallagher explained. “I realize that’s a hard teaching to grasp and to follow, particularly for couples who face the terrible pain of infertility. My heart breaks for them.”

Married couples struggling with infertility do have options that do not conflict with church teaching, she added.

“Our church supports medical interventions which assist the natural act of unitive and procreative love to achieve pregnancy, such as fertility drugs and surgery to overcome blocked tubes,” Gallagher said.

Other options, such as the restorative reproductive medicine offered through the Gianna Centers for Women’s Health and Fertility and natural procreative — known as NaPro — technology provide alternatives to infertile Catholic couples who wish to start families without violating church teaching, Gallagher said.

“The church needs to reach out to them with compassion and support to let them know about the hidden gems of restorative reproductive medicine and the science of NaPro technology,” she said.