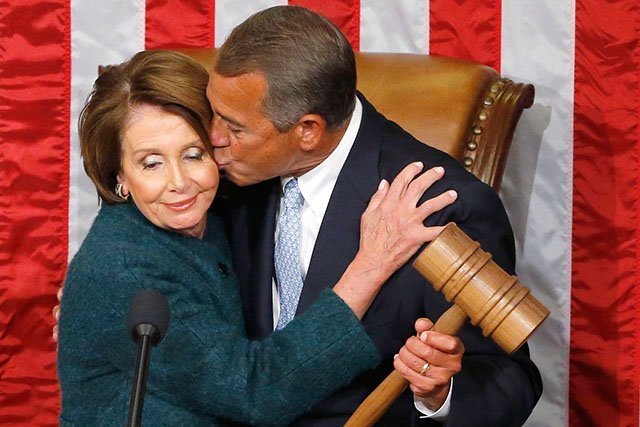 U.S. House Speaker John Boehner, R-Ohio, kisses Minority Leader Nancy Pelosi, D-Calif., as he holds the gavel after being re-elected speaker on the House floor at the U.S. Capitol Jan. 6. Boehner and Pelosi are among the 31 percent of House and Senate members who are Catholic.

WASHINGTON (CNS) — The numbers don’t lie. Once again, there are more Catholics in Congress than members of any other religious denomination. And the numbers stay strong term after term.

Even though Catholics account for only about 22 percent of the U.S. population — admittedly the largest body of religious belief in the country — they make up 31 percent of the House and the Senate.

If you’re looking for differences between the two major parties, there’s indeed some — but Catholics are still overrepresented in both the Democratic and Republican parties. There are 83 Catholics among the 234 Democrats in the House or Senate, good for 35 percent of the Democrats’ total, and 81 Catholics among the 301 Republicans in Congress, or 27 percent of the GOP’s total, according to figures issued in a Pew Research Center study issued shortly before the 114th Congress was sworn in Jan. 6.

What makes Catholics so eager to want to serve in electoral office, and what makes them so electable?

Daniel Philpott, director of the Center for Civil and Human Rights at the University of Notre Dame, speculated there is a "strong tradition of social thought in the Catholic Church, more developed than in the mainline Protestant churches."

Philpott pointed to the issuance of Pope Leo XII’s 1891 encyclical "Rerum Novarum" as the starting point "where the church decided to engage the modern nation-state." Philpott said the Second Vatican Council also did much — even more than the election of John F. Kennedy as the first, and so far only, Catholic U.S. president — to advance the notion of politics as a noble vocation. Vatican II’s endorsements of religious freedom, human rights and democracy left an imprint in the minds of Catholic laity at that time.

Closer to home, "the American Catholic bishops have for decades touted and advocated social justice as part of the mission of the church, it may be in part because of the immigrant character of the church" that led bishops to go to bat on such issues as workers’ rights and welfare benefits,

Pew statistics reveal that 20 percent of Americans now profess no religious belief or are atheists. But only one self-proclaimed atheist serves in the House, and she was only first elected in 2013.

Catholics have such appeal, Orlando added, that they can get elected in districts in the Deep South where the Catholic population registers in the single digits.

"John Calvin said the highest civil calling was good government," said the Rev. Dale Kuehne, a political science professor at St. Anselm College in Manchester, New Hampshire. "It’s one of the highest civil goods you could have, and I believe that."

Rev. Kuehne, ordained in the Evangelical Covenant Church of America — "If there’s another minister with a degree in politics, I’d like to meet him," he said — recalled when he taught political science for five years at a Baptist college in the Midwest. "The students would come to me and say how can we win and still be Christians," he noted. "At St. Anselm, students would come up to me and say, ‘How can we win?’ It wasn’t that Catholic students were less committed to their faith. But there was a recognition that to get something done, you had to win."

"I don’t’ think it’s unique to (people with) faith perspectives to want to make the world a better place. If you have a faith perspective, you should want that. I think a lot of people get into it for that reason," Rev. Kuehne said. "I think some people lose their way."

The Pew tally of Catholics in Congress included Rep. Michael Grimm, R-New York. who won re-election despite a 20-count federal indictment on charges of tax evasion, tax fraud and perjury. One week after he pleaded guilty to a single count of tax fraud and admitting to perjury, wire fraud and hiring undocumented immigrants in December, he said he would resign from Congress before the new Congress was sworn in. And, on the day the new Congress was seated, the former Republican governor of Virginia, Bob McDonnell, a Catholic, was sentenced to two years in prison after being found guilty on 11 felony corruption charges.