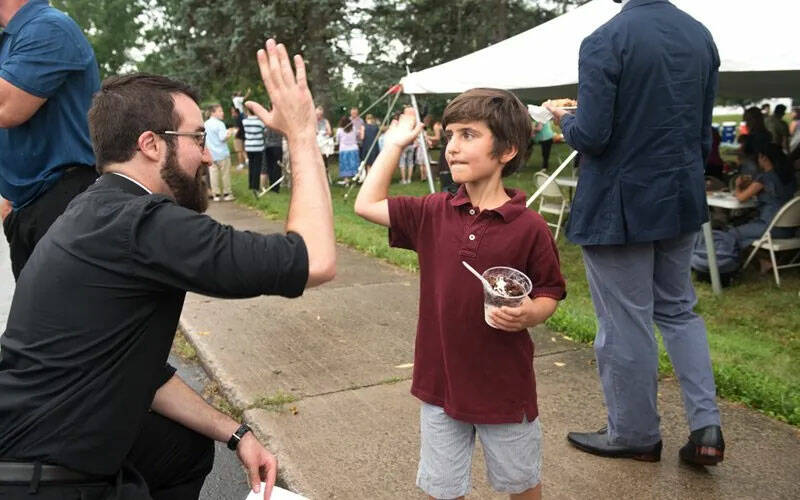 Families gather at Finger Lakes parish to pray for vocations

SHORTSVILLE — At first glance, the gathering outside St. Dominic Church Aug. 4 looked like a typical summer event. There was an ice cream truck, meat sizzling on a grill, adults chatting under a tent and children playing cornhole on the lawn.

The picnic, as well as the Mass that preceded it, had a very specific purpose, however, according to Janene Loughran, one of the event’s organizers.

“The Mass and picnic is a way to recognize the courage of the men entering seminary and the gratitude we have to them and our priests,” said Loughran, noting that current seminarians were invited to the event. “The seminarians get to meet the families … so they know when they’re out of the diocese and away at seminary, their church family back home is praying for them.”

George Bastedo IV, who hails from St. Joseph the Worker Parish in Clyde, Savannah and Lyons, is one of the four men currently studying to become a priest for the Diocese of Rochester. The knowledge that so many people are praying for him is very encouraging, said Bastedo, who in September will begin his third year at St. John’s Seminary in Brighton, Mass.

“I think everyone has days when they think, am I doing the right thing? It’s very awe-inspiring to know I have all these people praying for me,” Bastedo said.

In addition to providing prayerful support for seminarians, those present at the Aug. 4 Mass also were praying for an increase in future vocations to the priesthood, noted Loughran, who belongs to St. Jerome Parish in East Rochester.

Catholics need to pray “fervently, without end” for an increase in vocations to the priesthood and religious life, agreed Father Aaron Kelly, who celebrated the Mass in Shortsville just weeks after his own July 2 ordination. The Aug. 4 Mass took place on the feast day of St. John Vianney, who is the patron saint of parish priests, Father Kelly told the more than 200 people present at the Mass at St. Dominic Church, which is one of the three worship sites of St. Peter Parish.

Father Kelly: Priest’s mission is to bring people to God

St. John Vianney served the Catholics in the small town of Ars, France, in the 1800s, said Father Kelly, who paid a visit to Ars last December. During his trip, Father Kelly spent time in the chapel where the incorrupt heart of St. John Vianney is housed.

St. John Vianney firmly believed that his mission as a priest was to bring his people to God so they might know his love and mercy and their souls might be saved, said Father Kelly, recounting how he came to the realization that he soon would be charged with the same task. Then a seminarian, he knew that upon his ordination he would be called to weep with those who are mourning and celebrate with those who rejoice; to get up in the middle of the night to visit the hospital when he was needed there and to extend God’s mercy to the repentant in the confessional.

“As I reflected on those things in the chapel there was not fear, but a great peace and joy. There was no reason for fear, because the love that I was being called to have is the very love that Christ has for each one of us,” said Father Kelly, who served over the summer at Rochester’s Peace of Christ Parish and was to return to the Pontifical Gregorian Institute in Rome, where he is studying to earn his licentiate in canon law.

This love of Christ is the only answer to the violence and hatred present in our world, and all baptized Christians are called to live out Christ’s love in the world, Father Kelly said. Catholics need to pray that priests remain faithful to their vocation, that they know God’s immense love for them, and that they receive the grace they need to give that love to others, he added.

Equally important, according to Father Anthony Amato, are prayers that more young people will discern vocations to the priesthood and religious life.

“We believe in the power of prayer,” said Father Amato, pastor at St. Peter Parish. “We believe that out of all these families that you see, with all these children, that at some point God will move their hearts to realize he is calling to them.”

Young men cannot recognize a calling to the priesthood if they do not know what the priesthood looks like or entails, noted St. Peter parishioner Maggie DeMarco. Her four sons are altar servers at St. Peter, and both Father Amato and his predecessor, Father Peter Van Lieshout, have taken the time to know parish families, she said.

“They play football with the kids on the parish lawn. They come over to our house and play baseball in the backyard,” DeMarco said. “(The kids) get to see them in their role as priests, but also get to see they’re human too.”