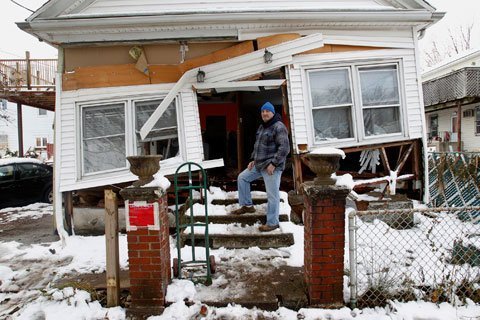 Rudy Mienert, a parishioner of Our Lady of Lourdes Church in the New York borough of Staten Island is seen Nov. 8 standing outside his home, which was destroyed by Hurricane Sandy in late October.

The eight Catholic dioceses in New York state have raised more than $6.8 million in emergency relief funds for victims of Hurricane Sandy, which devastated parts of New York and New Jersey in late October.

The five upstate dioceses of Albany, Buffalo, Ogdensburg, Rochester and Syracuse held special collections, fundraisers and school events in the aftermath of the hurricane and together raised more than $1.36 million. During a Jan. 23 news conference in Albany, they presented the fruits of their labor to Catholic Charities representatives from the three downstate dioceses hardest hit by Hurricane Sandy’s fury. The Archdiocese of New York and the dioceses of Brooklyn and Rockville Centre collected another $5.5 million to help the hurricane victims in their own communities.

Each of the upstate dioceses quickly planned special collections once the extent of the storm’s damage became known, and many parish and school communities gathered vital supplies and arranged to bring them to the disaster zone.

"The response has been overwhelming," Albany Bishop Howard Hubbard, speaking on behalf of the five upstate dioceses, said in a press release that was distributed during the press conference. "Our thoughts and prayers are with those who are still recovering from this storm, and these donations will be put to work right away. We want our fellow New Yorkers, and all affected by the storm, to know that we stand in solidarity with you during this period of recovery."

Each day Catholic Charities agencies throughout the state help individuals and families to resolve their problems and rebuild their lives, noted Msgr. Kevin Sullivan, CEO of Catholic Charities of the Archdiocese of New York. Msgr. Sullivan accepted the check for $1.36 million from the upstate dioceses during the press conference.

"When Sandy devastated so many communities in New York City and Long Island, Catholic Charities was present to be able to respond immediately to alleviate hardships and help hurting families. In the immediate aftermath and for the long-term the range of Catholic Charities services are available to meet critical human needs," Msgr. Sullivan said.