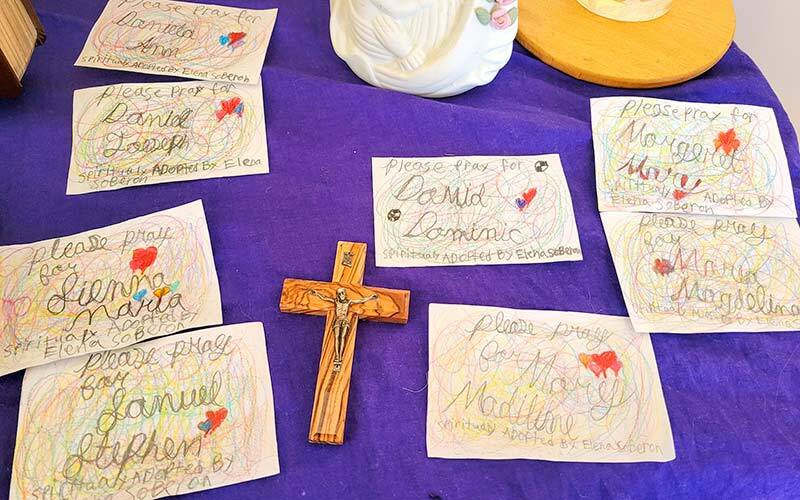 Since late March, she has spent time each day praying for eight unborn babies. She prays using the names — both first and middle — that she gave to the babies when she spiritually adopted them.

“I made little prayer cards that I could keep at our house for them, and I put their names on them,” Elena said.

Elena is participating in the spiritual-adoption program launched at St. Peter Parish the weekend of March 26-27. Baskets of pink and blue pledge cards were placed in the parish’s worship sites in Shortsville, Phelps and Clifton Springs that weekend, according to Laura Gleeson, St. Peter’s Creating a Safe Environment coordinator.

Parishioners were invited to take pledge cards and commit to nine months of daily prayer for unborn babies in danger of being aborted, Gleeson explained. Each pledge card included a place for the names of both the parishioner and the spiritually adopted baby, as well as a simple prayer attributed to Archbishop Fulton J. Sheen, who served as bishop of the Diocese of Rochester from 1966-69.

Parishioners returned completed pledge cards and took prayer cards, some of which contained prayers tailored toward young children, Gleeson said. On the fourth weekend of every month, bulletin inserts and posters on display in all three churches will provide illustrations and information about the child at that particular stage of development, she added. The posters displayed March 26-27, for example, depicted the zygote that is formed at conception, Gleeson said.

“The monthly bulletin inserts and posters educate parishioners and families about the development of the pre-born baby, facilitating a better understanding of the sacredness of all life from the moment of conception to natural death, and the call by our faith to protect all life, especially the most vulnerable,” she said.

A way for children to join pro-life movement

This poster and the basket of pledge and prayer cards attracted the attention of Elena and her younger sister, Sara, after Mass on March 27.

“Honestly, the girls found it before I even made it to the back,” their mother, Melanie Soberon, remarked.

“I saw that it was a way that I could help the pro-life movement and save the lives of babies, so I decided I would pray for two of them,” Elena added. “The next day when we went to church again, I took six more, and now I have eight spiritual children.”

“You just pray for them every day for nine months, and then basically you could stop praying, but I might keep praying until they’re like 2 years old,” Elena said.

Soberon said she wasn’t surprised that her children were drawn to the spiritual-adoption program.

“The pro-life movement has been on all of their hearts,” she said, explaining that she and her husband became involved in the movement while they were completing their doctoral work at Cornell University 13 years ago.

The Soberons regularly participate in the 40 Days for Life campaign outside of Planned Parenthood in Rochester, and Fernando and Sara recently asked family members to forego buying them birthday presents and instead buy diapers to be donated to moms in need. In January, Fernando also attended the March for Life in Washington, D.C., with Soberon.

Inspired by Fernando’s example, Elena had been wanting to become more involved with the pro-life movement when she learned about the spiritual-adoption program.

“It met a special need for younger children to be able to do something at their age and stage of life. It’s hard for children to know what to do, but to see that their prayers can be so powerful and effective, that’s an encouragement,” Soberon said.

Organizers hope the campaign will encourage prayer in parishioners of all ages and lead to more families praying together every day, Gleeson said.

Not only does the Soberon family pray every day for its 12 spiritually adopted children, but Elena also drew pictures of each of her babies in the womb, with insets showing the hand of God infusing souls into the babies.

Tags: Abortion, Ontario County News
Copyright © 2022 Catholic Courier, Inc. All rights reserved. Linking is encouraged, but republishing or redistributing, including by framing or similar means, without the publisher's prior written permission is prohibited.