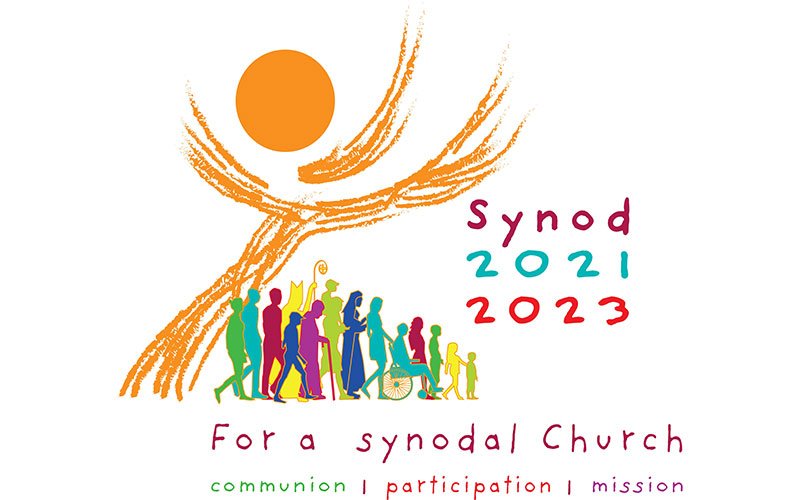 This is the official logo for the XVI Ordinary General Assembly of the Synod of Bishops. Originally scheduled for 2022, the synod will take place in October 2023 to allow for broader consultation at the diocesan, national and regional levels. (CNS photo courtesy Synod of Bishops)

These are some common themes that surfaced in a sampling of U.S. dioceses’ synthesis reports on listening sessions they held in preparation for the world Synod of Bishops on synodality in October 2023.

In the listening phase, members of parishes, dioceses, religious orders and Catholic movements were asked to consider the ways in which they currently experience the church as “synodal,” that is, as a community that walks together, and to suggest ways to strengthen that in practice.

A synthesis of the listening sessions formed a report each diocese had to submit to the U.S. Conference of Catholic Bishops; 16 regional teams were working on drafting regional reports synthesizing diocesan reports.

Report submitted to the Vatican Secretariat of the Synod of Bishops

The USCCB will in turn synthesize the summaries from throughout the nation for a report to submit to the Vatican Secretariat of the Synod of Bishops.

The secretariat will use the reports from bishops’ conferences around the world to develop the “instrumentum laboris,” or working document, to guide continental or regional ecclesial assemblies that will take place by March 2023.

“Pope Francis’ vision for the synod called for the largest consultative process both in the history of the Catholic Church and the history of humankind,” said Seattle Archbishop Paul D. Etienne, who attended several local gatherings.

The archdiocese’s report captures feedback from nearly 1,000 online and in-person gatherings since January, involving over 11,000 people across western Washington.

“I’m so proud of the many thousands of people in western Washington who led, participated and invited others to prayerful dialogue. These events were marked by prayer, heartful sharing and attentive listening,” Archbishop Etienne said.

“The purpose was not to determine solutions; rather to practice walking with each other as church, to listen for the Holy Spirit and to begin to discern what God is asking of us in our time,” he added.

Suggested discussion prompts were intentionally broad, freeing each participant to respond as they felt appropriate. One participant described the synod as “an official, church-sanctioned conversation in which there are no taboo subjects, no off-limits subjects, no wrong answers.”

More than 90% of the archdiocese’s parishes are represented in its synod synthesis report. Additionally, listening sessions were held with students, the imprisoned, Catholic Community Services of Western Washington and women religious.

In the Archdiocese of Louisville, Kentucky, the faithful shared their experiences of the church during 120 in-person group listening sessions.

“This synthesis reveals pain and challenges within our church along with opportunities for healing and growth,” wrote Louisville Archbishop Shelton J. Fabre in a cover letter accompanying the archdiocese’s synthesis. “It also reflects the great enthusiasm with which participants entered into this process.”

“I invite all of you to read and reflect on this synthesis and look for ways to engage with your local faith community,” he said. “A major theme that emerged from this listening was people’s love for the church and their deep desire for the church to be a vital force in the lives of individuals, families and communities.”

“A full spectrum of opinions was represented” in the Diocese of Paterson, New Jersey

For thousands of Catholics in the three-county Diocese of Paterson, New Jersey, the listening phase was “more than simply an enormous feedback session.”

“The process was a deeply spiritual moment of collective discernment and encounter connected to the universal church,” the diocese said in its synthesis report.

“A full spectrum of opinions was represented,” it said. “Some called for the church to fully adapt and adjust to current times and trends; still, others to clearly articulate her immutable, orthodox teaching without compromise.

“Contrasting suggestions were made; for example, to limit the participation of, and presence of, the laity in the sanctuary and affirm the male, celibate priesthood versus to allow a married clergy and ordain women as deacons and/or priests.”

Participants identified a lack of inclusion and sensitivity to women, the Hispanic/Latino community, LGBTQ+ people, families with young children, people with special needs, people victimized by abuse, the elderly, “and other people who, for whatever reason, feel that they do not conform to the prevalent social or moral norms,” the report said.

Diocesan spokesperson Jai Agnish said that “reading the report was a moving experience.”

“The feedback is real and authentic and provides an honest assessment of experience and perceptions of Catholics right now. It also offers great hope for the future,” Agnish said. “The report reveals a deep concern and love for the church and reflects on the positive dynamism of this collective discernment process.”

Each parish in the Denver Archdiocese held listening sessions after an archdiocesan-wide retreat in Advent on mission of the synod. At these sessions, parishioners prayed together and discussed questions about mission.

This was followed by the archdiocesan discernment event March 25-27, where representatives from across the archdiocese “gathered to pray and discern together” what was revealed in the listening phase.

The faithful identified four primary missions, according to the archdiocese’s report:

— The disciple: “Take seriously that we have personal responsibility for the mission to evangelize those closest to us: our family, neighbors and co-workers.

— The family: “Every family needs accompaniment of some sort. Help the family to encounter healing and forgiveness. Recognize that parents are the primary formators and educators of their children. There is a desire to receive formation on how to do this well.”

— The Denver Archdiocese: It “is called to be an agent of unity, manifesting the unity of the mystical body of Christ. She is especially called to help unify the divides between our diverse languages and cultures. Clarity of communication about our mission, more initiatives for communal prayer and healing of wounds will all help to bring about this unity.”

In Iowa, the Diocese of Davenport’s “58,000 Cups of Coffee” initiative fueled synod conversations.

Massgoers were invited to have conversations with at least three different people: someone already in the pews; someone who used to be in the pews but hasn’t been since the pandemic; and someone who has never been a part of a faith community or stopped practicing long ago. Responses were shared on the diocesan website.

On a regional level, Patrick Schmadeke, diocesan director of evangelization, represented the Davenport Diocese on the Region IX team working on its own synod report. Altogether, 17,044 people of the 15 dioceses that comprise the episcopal region participated in listening sessions and 37,666 completed online surveys.

“We’re not alone in the joys and challenges we experience in the church,” Schmadeke told The Catholic Messenger, Davenport’s diocesan newspaper.

“Among the joys is the Eucharist, which the faithful say strengthens their faith and their connection with one another as members of the body of Christ,” he said. “Among the challenges is polarization.”

He added: “We need to participate in the healing that has to come, which points back to two things: the Eucharist and thoughtfully tending to the fabric of our communities.”

Contributing to this story were Marnie McAllister in Louisville and Barb Arland-Fye in Davenport.