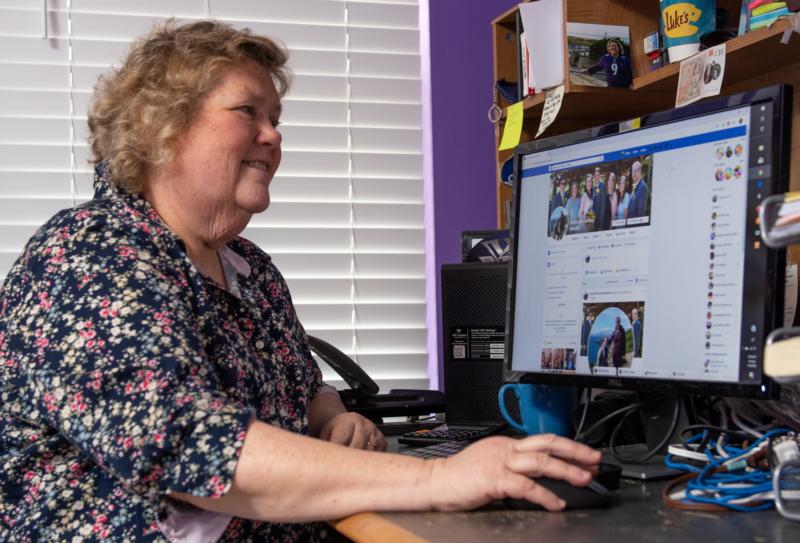 Sheila Wheltle, a parishioner at St. Mark Church in Catonsville, Md., is pictured at her home Jan. 23, 2020. Wheltle has given up social media for Lent the past nine years. (CNS photo by Kevin J. Parks/Catholic Review)

BALTIMORE (CNS) — No selfies. No cat videos. Not even an artfully composed photo of avocado toast.

More Americans are embracing the concept of a “digital detox” as social media becomes more ubiquitous and at times more harmful, however, others are disconnecting with a distinctly Catholic twist.

Wheltle, a parishioner of St. Mark Church in Catonsville, Maryland, uses Facebook to connect with old friends. She grew up in Philadelphia and later moved to California. She loves how Facebook keeps her in touch with those far-flung friends, but she’s also set it aside for the past nine years during Lent.

“As an extrovert, it really is a lot of fun,” Wheltle told the Catholic Review, the media outlet of the Archdiocese of Baltimore. But she said, “Facebook is also a major distraction and time waster.”

The tradition of giving up small pleasures, like sweets or coffee, for Lent goes back to the 40 days Jesus spent in the desert fasting and praying. While Catholics are encouraged to pick something that’s actually a sacrifice, that doesn’t mean the sacrifice isn’t beneficial.

Father Mark Bialek, pastor of St. John Parish in Westminster, Maryland, said as Lent approaches he is hearing from more of his parishioners this year about the need to unplug.

“It does seem to be a priority this year,” Father Bialek said. “You want to pick something that’s going to bring you closer to God, something that helps lessen all the distraction and noise. And certainly social media is a lot of distractions and noise.”

Greg Hoplamazian, a professor of emerging media at Loyola University Maryland in Baltimore, said it is it not surprising to see people consider digital detoxes amid recent headlines about the negative effects of social media. Hoplamazian said platforms such as Facebook and Instagram want users engaging with their services constantly, but that’s not always a positive thing.

“Social media platforms are really designed to hold our attention. That’s been the main focus, keep people on the platform longer,” Hoplamazian said. “But we might not get a lot of benefit. We lose free time. We lose the space for our minds to really just think and wander and be creative.”

Hoplamazian said studies have shown that notifications from social media can actually trigger a rise in the feel-good chemical dopamine in the brain, giving people further incentive to stay online.

Even though Wheltle admitted she’ll be missing some things over Lent — such as wishing some friends a happy birthday — she said the time off is worth it. “I’m sure others pick up the slack,” she said of those Lent birthdays.

Wheltle is a member of the Walking With Purpose group at St. Mark, which is now focusing on finding a sense of balance in everyday life.

“The saved time can be spent completing undone tasks around the house, perhaps cooking more but also, as it is Lent, working on my prayer life and reading scripture more,” Wheltle said.

Father Bialek said even though social media provides more connections, too much of it can hurt you’re most meaningful ones such as your relationships with family and God.

Another downside to social media, Hoplamazian said, is how people compare themselves to other social media users.

“Essentially what makes it to a social media feed is like the highlights of other people’s lives,” Hoplamazian told the Catholic Review. “So all we see are people’s vacations and really beautiful pictures and awesome things and accomplishments. So what we see looks like everyone else is doing awesome all the time.”

Hoplamazian said a break from social media can not only benefit people during the time away, but when they return.

“There’s this fear of missing out that keeps people engaged but when they step away and they realize, ‘Oh I didn’t really miss out on anything important,'” he said. “I think it gives people a healthier ability to realize, ‘Wow. You know I would think about this way too much, and I try to check it too much and maybe I should just check them once a day or twice a day.'”

Swift is the social media coordinator for the Catholic Review and the Archdiocese of Baltimore.