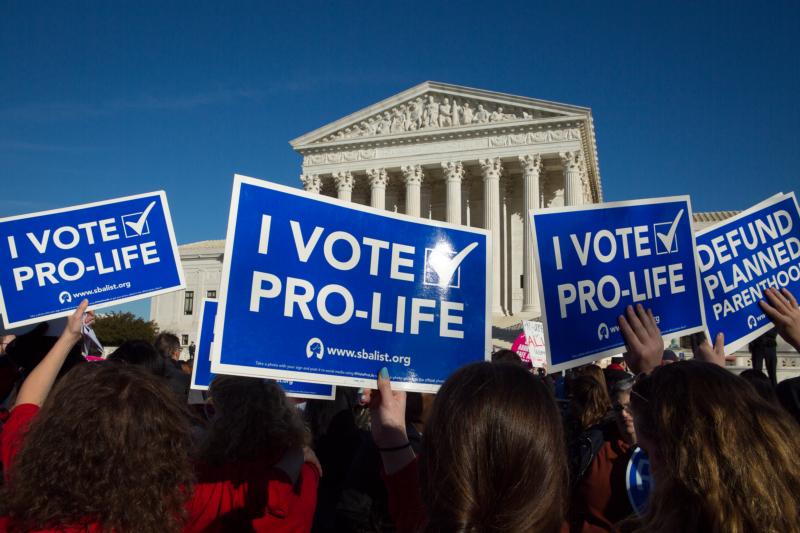 Pro-life advocates gather near the U.S. Supreme Court during the annual March for Life in Washington Jan. 19. (CNS photo by Tyler Orsburn)

Proposed legislation that opponents say would significantly expand abortion in New York state is expected to be passed by the state Legislature shortly after the 2019 legislative session begins Jan. 9, according to Kathleen Gallagher, director of pro-life activities for the New York State Catholic Conference.

The Reproductive Health Act — sometimes referred to by opponents as the Abortion Expansion Act — has the support of Gov. Andrew Cuomo, who recently announced his agenda for the upcoming legislative session. In a Dec. 18 speech, Cuomo urged lawmakers to pass the act within the first 30 days of the session. In previous years, the legislation, which was first introduced in 2007 by then-Gov. Eliot Spitzer, has passed in the Democrat-controlled state Assembly but stalled in the Republican-majority Senate. However, after November’s mid-term elections, both houses of the state Legislature have a Democratic majority.

“In the New York State Senate, which had really been the roadblock for that bill, now there are at least 39 ‘yes’ votes for that bill, and it has always passed in the Assembly, and it’s been championed by Andrew Cuomo. ‚Ä¶ It’s the first thing on his agenda, because so many of the new Democrats campaigned on this issue,” Gallagher said.

Proponents of the Reproductive Health Act frequently frame it as a simple codification of Roe v Wade, saying it merely updates New York’s laws to reflect the landmark 1973 Supreme Court decision, said Gallagher, who takes issue with this description of the legislation.

The Reproductive Health Act also would allow abortions for virtually any reason in the third trimester of pregnancy, Gallagher said. It also would remove abortion from the state’s penal code, which means there would no longer be a criminal avenue to pursue if a baby dies in the womb through an act of domestic violence or another crime, added Suzanne Stack, life-issues coordinator for the Diocese of Rochester.

“I doubt that almost any of us in New York state would be comfortable with these provisions, but we have not been offered the facts by most of the media or by many of our legislators,” Stack said.

Contact information for the newly elected legislators will be made available when the session starts Jan. 9, and Stack and Gallagher are encouraging Catholics to contact their legislators that day or as soon as they can in order to voice their opposition to the Reproductive Health Act.

“It is so important for your legislators to learn of your opposition to this bill before it is voted on,” Stack said.

If the bill does pass in spite of such efforts, Gallagher said pro-life advocates should not be discouraged.

“We have fought and blocked that bill for 12 years, and I think people have to be comforted by the fact that we undoubtedly saved innocent human lives and spared some mothers some pain in that time,” she said.

And even after all legislative options have been exhausted, there are still actions people can take to decrease the amount of abortions that take place in the state and beyond, Gallagher added. Certainly prayer is foremost among these actions, as is showing compassion for women who find themselves facing unplanned pregnancies, as well as women who have had abortions in the past, she said.

“We have to not only talk the pro-life talk, we have to walk the pro-life walk and live our lives in such a way that people know that we respect human life, and that will overtake the culture,” Gallagher said.

Although the passage of the Reproductive Health Act would be “a crushing loss,” it is not the end of the line for pro-life efforts, Gallagher added.

“We have to keep our eyes on the prize, which is a world in which no young woman ever feels the need to use that law,” she said.

EDITOR’S NOTE: To learn more about this legislation or make your voice heard, visit the New York State Catholic Conference online at www.nyscatholic.org.