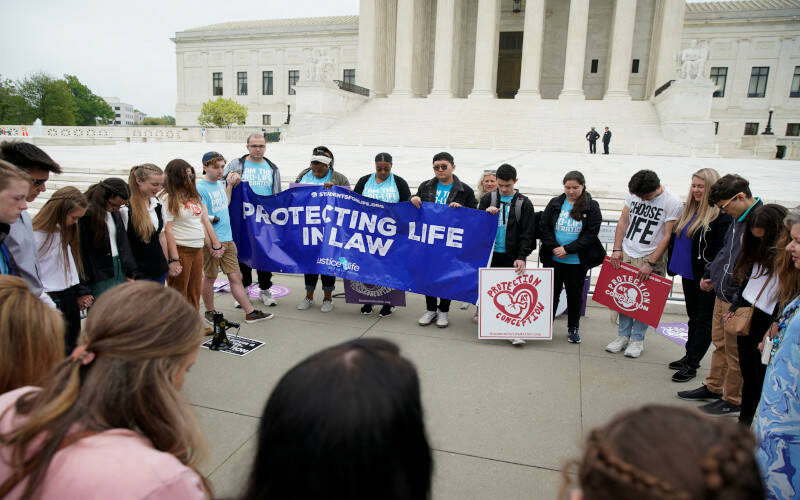 Abortion demonstrators are seen outside the U.S. Supreme Court in Washington May 3 after the leak of a draft majority opinion written by Justice Samuel Alito preparing for a majority of the court to overturn the landmark Roe v. Wade abortion rights decision. In response to the leak, New York state’s governor and attorney general announced efforts to expand abortion access in the state. (CNS photo by Elizabeth Frantz/Reuters)

On May 9, James announced state legislation (A.10148) that would establish a program to provide financial support to New York abortion providers in the hopes of expanding access to abortion for low-income state residents as well as people traveling to New York specifically to obtain abortions. And on May 10, Hochul announced the immediate appropriation of $35 million in state funding to support abortion providers and ensure access to abortion.

Both moves were prompted by the May 2 leak of a draft opinion that seemed to indicate U.S. Supreme Court justices may be preparing to overturn the court’s 1973 Roe v. Wade decision, which legalized abortion in the nation. Hochul responded to the leak with a May 3 statement in which she welcomed women seeking abortions “with open arms.”

“My message to women all across this country is that New York, the state of New York will always be there for anyone who needs reproductive health care, including an abortion,” she said during a May 3 press event.

Rather than courting out-of-state women seeking abortions, state officials should focus on making the culture in New York state more welcoming for women in crisis pregnancies who would choose to keep their babies if they had more support and resources, according to a May 9 statement from Kristen E. Curran, director of government relations for the New York State Catholic Conference. The conference represents New York’s bishops, including Rochester Bishop Salvatore R. Matano, in public-policy matters.

New York is already the “undisputed abortion capital of the country,” as it mandates abortion coverage without copays in all commercial insurance plans and covers abortions in full through taxpayer-funded Medicaid, Curran said in response to the attorney general’s proposed legislation.

“Now, some officials want to make abortion a tourism industry, like Broadway or Niagara Falls, for out-of-state residents. This is appalling,” Curran stated.

Catholic conference officials similarly decried Hochul’s announcement that state funds would be used to support abortion providers. The governor has directed the state Department of Health to use $25 million to create an Abortion Provider Support Fund, intended to expand capacity for and access to abortions in the state. Another $10 million will be used to access security grants through the Division of Criminal Justice Services to ensure abortion providers’ safety.

When will NY support women who keep their babies?

These actions represent a “grave misuse of state resources and an insult to millions of pro-life New Yorkers,” according to a May 10 statement from Dennis Poust, executive director of the New York State Catholic Conference.

“Inviting women from out of state to come here to abort their unborn children is a breathtaking reminder of how far our culture has fallen,” he stated. “We must ask again, when will New York lawmakers begin to dedicate even a fraction of their rhetoric and policies to supporting women who want and need the resources to keep their babies? In this month of Mary, the Bishops of New York State urge all Catholic New Yorkers to pray through her intercession for a change of heart for all elected officials, particularly those who profess the Catholic faith, and for a building up of a culture of life in our state.”

Catholic conference officials are urging Catholic New Yorkers to contact Hochul’s office and voice their opposition to the Abortion Provider Support Fund. A prewritten, editable message may be found on the Catholic conference’s website.