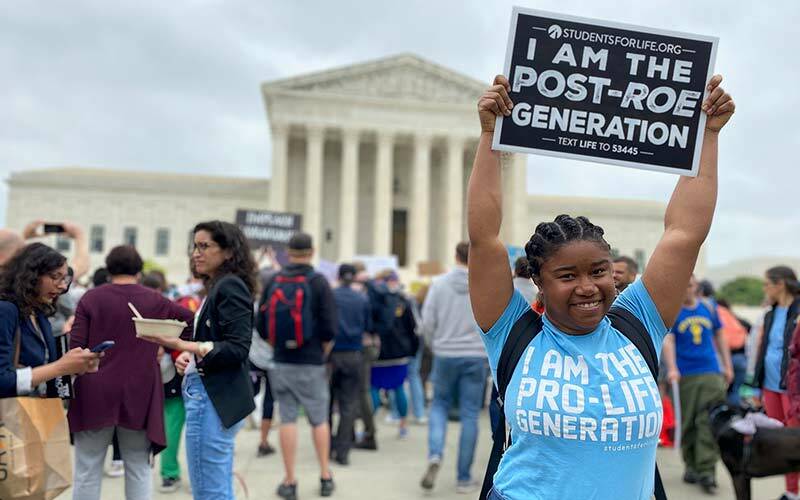 Norvilia Etienne, of Students for Life, holds a sign outside the Supreme Court of the United States May 3, the day after a draft of the court’s opinion was leaked signaling that the court was leaning toward overturning Roe v. Wade. (CNS photo by Rhina Guidos)

The U.S. Senate is scheduled to vote this week on proposed legislation that would legalize abortion at any stage of pregnancy and invalidate existing state and federal laws regulating abortion. Senate Majority Leader Charles Schumer, D-N.Y., scheduled the May 11 vote on the Women’s Health Protection Act (S.4132), which the Senate previously rejected Feb. 28 in a 46-48 vote.

The Senate vote was scheduled in the wake of the May 2 leak of a draft opinion that seemed to indicate that Supreme Court justices may be preparing to overturn the court’s decision in the 1973 case of Roe v. Wade, which legalized abortion in the nation.

Catholics in New York state are being urged to contact their legislators and speak out against the proposed federal legislation, according to a May 9 Action Alert from the New York State Catholic Conference, which represents the state’s Catholic bishops in public-policy matters.

“Senator Schumer alone has the power to call for this vote. Make your voice heard to oppose this action,” the Catholic Conference stated in the May 9 alert.

If passed, the Women’s Health Protection Act would “eliminate modest and widely supported pro-life laws at every level of government — the federal, state and local level — including parental notification for minor girls, informed consent and health or safety protections specific to abortion facilities,” according to the New York State Catholic Conference. The legislation also would invalidate current laws prohibiting government funding for abortion as well as laws that “‘impede access’ to abortion, no matter how reasonable the law or how slight the impediment,” according to a fact sheet produced by the U.S. Conference of Catholic Bishops’ Secretariat of Pro-Life Activities.

The legislation also would likely trump state and federal conscience laws that protect the right of health-care professionals, employers and insurers to refrain from performing or paying for abortions, according to the USCCB’s fact sheet.

“We need to send an unmistakable message that this horrible bill must never be enacted,” the Catholic conference stated May 9.

On May 9, New York Attorney General Letitia James responded to the news of the leaked draft Supreme Court opinion by announcing legislation that would establish a program to provide financial support to abortion providers in the state in the hopes of expanding access to abortion for low-income state residents as well as people traveling to New York from states that prohibit abortion.

The state Catholic conference decried this move in a May 9 statement from its director of government relations, Kristen E. Curran. New York is already the “undisputed abortion capital of the country,” where abortion coverage is mandated in all commercial insurance plans without copays, and taxpayer funded Medicaid provides full coverage for abortions, she said.

“Now some officials want to make abortion a tourism industry, like Broadway or Niagara Falls, for out-of-state residents. This is appalling,” Curran stated. “We believe the state should focus on its own residents and making New York a more welcoming culture for women in crisis pregnancies who would choose to keep their babies if only they had the supports and resources they deserve.”