Catholics urged to pray for peace in U.S. - Catholic Courier 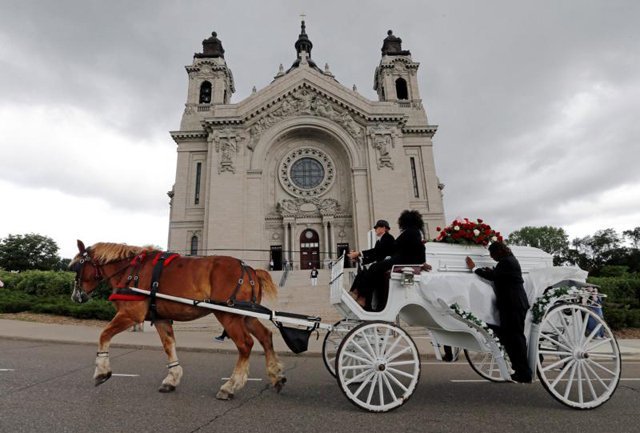 A horse-drawn carriage carries the casket of Philando Castile July 14 as it passes the Cathedral of St. Paul in St. Paul, Minn. Church officials say the mother of 32-year-old man, who was not Catholic, requested the cathedral hold an ecumenical funeral service for her son. Castile was shot and killed by a police officer July 6.
By Catholic News Service
BALTIMORE (CNS) — The National Black Catholic Congress July 13 issued a prayer and call to action following a week of violence across the United States that saw police in Louisiana and Minnesota shoot two suspects and a sniper in Dallas kill police officers.
The Baltimore-based organization said it joined the nation "in mourning over the tragedies." "As we commend to the Lord those who have died, we pray for the consolation of all who are grieving," it said in a statement.
"It is important for black Catholics to contribute to the ongoing national conversation about the underlying issues which have existed for too long," the congress said. "These issues include racism, inequality, poverty, and violence. During this Jubilee Year of Mercy, we must be signs of God’s love which promotes justice. Justice promotes right relationships, which includes upholding the dignity of human life."
The National Black Catholic Congress, which is comprised of membership organizations, invited African-American Catholics and all people of goodwill to join in a time of prayer and action.
"We believe in the power of prayer. We also believe that we must cooperate with how God will answer our prayers," the congress said.
It called on all to join in offering a prayer from the Roman Missal’s Votive Mass for the Progress of Peoples from July 18 to Aug. 15:
"O God, who gave one origin to all peoples and willed to gather from them one family for yourself, fill all hearts, we pray, with the fire of your love and kindle in them a desire for the just advancement of their neighbor, that, through the good things which you richly bestow upon all, each human person may be brought to perfection, every division may be removed, and equity and justice may be established in human society.
"Through our Lord Jesus Christ, your Son, who lives and reigns with you in the unity of the Holy Spirit, one God, for ever and ever."
The Knights of Columbus in New Haven, Connecticut, called for nine days of prayer for peace, from July 14 to July 22, "to heal the wounds and divisions
afflicting this country."
"The violent episodes of the past week have shocked the conscience of our country," said Supreme Knight Carl Anderson in a July 11 statement. "Through this prayer, each of us has the opportunity to help transcend hatred and violence by personally committing to the concepts of love of neighbor, peace and forgiveness that are central to an authentic embrace of Christianity. It is our hope that, from coast to coast, those who pray this prayer will become true instruments of peace."
The Knights asked that during the novena people recite the "Prayer of St. Francis" to pray for peace:
"Lord, make me an instrument of your peace; where there is hatred, let me sow love; where there is injury, pardon; where there is doubt, faith; where there is despair, hope; where there is darkness, light; where there is sadness, joy. O Divine Master, grant that I may not so much seek to be consoled as to console; to be understood as to understand; to be loved as to love. For it is in giving that we receive; it is in pardoning that we are pardoned; and it is in dying that we are born to eternal life."
Copyright © 2022 Catholic News Service, Inc. All rights reserved. Linking is encouraged, but republishing or redistributing, including by framing or similar means, without the publisher's prior written permission is prohibited.