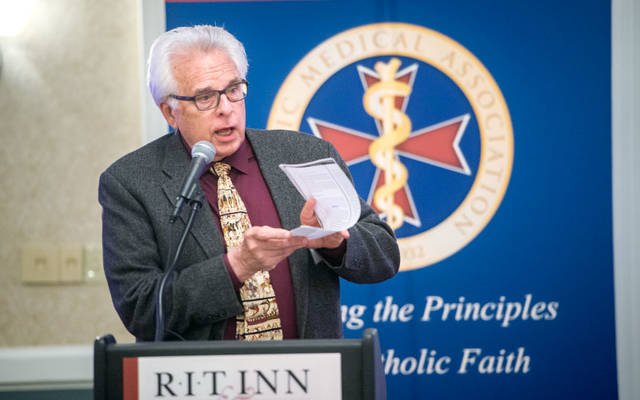 Wesley Smith gave talks on “Medical Conscience” and “The Threat of Utilitarian BioEthics and Assisted Suicide” during a May 5 Catholic medical conference in Henrietta presented by the Catholic Medical Association’s Finger Lakes Guild.

Fueled by the ongoing possibility of physician-assisted suicide becoming legal in New York state, protesters from around the state — including the Diocese of Rochester — have joined forces to denounce potential legislation moves.

The state’s Assembly Health Committee conducted public hearings April 23 in Albany and May 3 in New York City on Assembly bill A.2383-A (S.3151-A in the Senate), also known as the “Medical Aid in Dying Act.” Both hearings were attended by proponents for physician-assisted suicide — most notably the national advocacy group Compassion and Choices — who said terminally ill patients should be given access to life-ending medication by doctors if they so wish.

Their arguments were countered by testimony from doctors, patients, caregivers and advocates for people with disabilities in conjunction with the New York Alliance Against Assisted Suicide. At the May 3 hearing, for instance, Edward Mechmann — public-policy director for the Archdiocese of New York who also spoke on behalf of the New York State Catholic Conference — argued that:

‚Ä¢ Legalization of this practice could promote a general increase in suicide among vulnerable people.

‚Ä¢ Physician-assisted suicide could serve as a gateway to legalized euthanasia, in which a doctor administers the fatal medicine directly rather than prescribing it to the patient. From that point, Mechmann said, this slippery slope could lead to legislation of involuntary euthanasia — the killing of people who did not ask for death.

‚Ä¢ Physician-assisted suicide could become available not only to people who are terminally ill but also those with mental and physical disabilities and the elderly.

‚Ä¢ The potential of insufficient oversight exists regarding patient protections, medical evaluations and administration of life-ending drugs to the intended individuals.

Speakers in Albany and New York City also called for better access to mental-health, hospice and palliative care, asserting that the state should focus more on how patients can continue their lives with less pain and discomfort rather than end them.

Suzanne Stack, the life-issues coordinator for the Diocese of Rochester who attended the April 23 Albany hearing, noted that the event had been scheduled on the same date and in the same city as a lobby day organized by Compassion and Choices. She contended that both the April 23 and May 3 hearings — although billed as being public — “were meant to be just testimonies from those who favor the bill,” saying that opponents of A.2383-A had to mobilize quickly in order to have be a vocal presence.

Stack said supporters of the aid in dying bill probably had hoped to get it passed in the Assembly before the state’s 2018 legislative-session calendar concludes June 20. Even if the Assembly swiftly passed it, Stack said the proposed measure doesn’t have as much support in the Senate and thus stands little chance of becoming law any time soon. However, she warned that advocates of physician-assisted suicide have exerted mounting pressure in New York state in recent years — and might eventually get their way depending on the outcome of future legislative elections.

“Compassion and Choices is going to be relentless. They’re working on this bill in several states. They want it nationally,” Stack said, noting that physician-assisted suicide already has become law in a handful of states, beginning with Oregon in 1997 and most recently in Hawaii earlier this year. “We have to be there to say, ‘Wait a second, not everybody thinks that way.’”

Stack also encouraged Catholics in the Rochester Diocese to express opposition to physician-assisted suicide by sending e-mails to their legislators via the state Catholic Conference’s Catholic Action Network at www.nyscatholic.org.