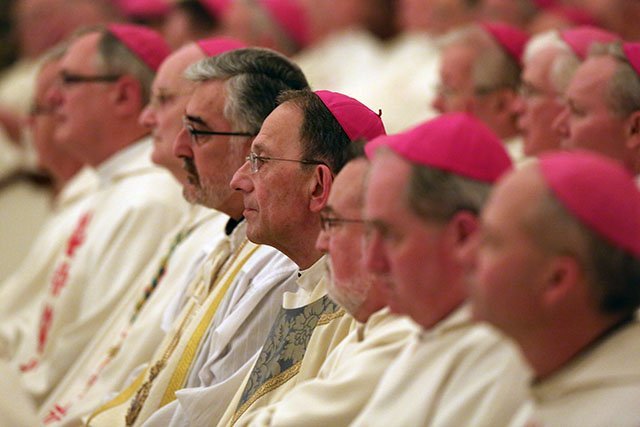 Bishops pray during Mass Nov. 10 at the Basilica of the National Shrine of the Assumption of the Blessed Virgin Mary in Baltimore. The Mass, marking the 225th anniversary of the Baltimore Archdiocese, was celebrated on the first day of the annual fall general assembly of the U.S. Conference of Catholic Bishops.

BALTIMORE (CNS) — For three and a half years, members of several U.S. bishops’ committees have been trying to pinpoint what Catholics in the pew are thinking and why they accept or reject church teachings.

To this end, they have conducted multiple surveys and interviews of various groups of Catholics: fervent believers, Latinos, singles, parents, priests and church leaders. Although responses have varied, one of the takeaways is that Catholics by and large want to learn more about what it means to be Catholic.

Boston Cardinal Sean P. O’Malley, chairman of the Committee on Pro-Life Activities, introduced the findings to the bishops Nov. 11 during their annual fall assembly in Baltimore.

He said the research was initially conducted to determine how to better communicate with Catholics and why they accept or disregard church teachings on the value of human life.

Cardinal O’Malley said the research grew in scope from its initial quest and he noted that the working group’s committee leaders would only be able to present a fraction of their findings in the time allotted for their report. He said they planned to make their research available online to the bishops and to conduct workshops to further explain their findings.

Miami Archbishop Thomas G. Wenski, chairman of the Committee on Domestic Justice and Human Development, presented a snapshot of the findings and said they reveal both challenges and opportunities for church leaders.

Among the challenges evident in the responses was that many Catholics experience a disconnect between the teachings of the church and teachings of Jesus. He also said many of those surveyed and interviewed have had little or no catechesis. They also expressed how the clergy sex abuse scandal impacted the church and felt that not enough had been done to rectify it.

On a positive side, he said many Catholics expressed a sense of God’s love and they also were more involved in parish life when parish ministries were tied into the Gospel message.

Across the board, some Catholics felt there were too many rules in the church that they didn’t understand and others felt that people in the church can be too judgmental. Some sensed that their parishes are divided into pro-life and social justice camps. Many wanted to understand the whys of church teaching.

Bishop Richard J. Malone of Buffalo, New York, who is chairman of the Committee on Laity, Marriage, Family Life and Youth, told the bishops that the research was "enlightening and sobering." He acknowledged that it was "a lot to unpack and unfold" but urged the bishops to be "encouraged, not discouraged" by it.

He said the findings essentially point to the need "to proclaim the Gospel and bring people to a renewed encounter with Jesus."

One way the working group of bishops’ committees plans to do that is through a Catholic convocation in Orlando, Florida, in July 2017.