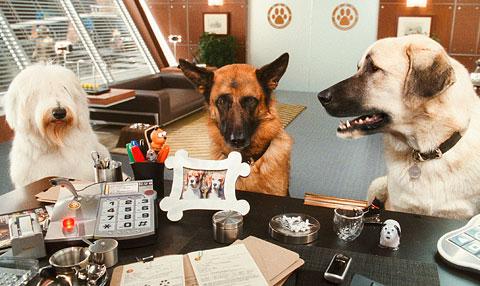 NEW YORK (CNS) — Doctor Doolittle meets James Bond in "Cats & Dogs: The Revenge of Kitty Galore" (Warner Bros.), a clever and funny 3-D spy adventure for the entire family. This follow-up to the 2001 comedy "Cats & Dogs" seamlessly blends live action, puppetry, and computer animation as — unbeknownst to their beloved human owners — the two species of the title must join forces to save the planet from one very bad kitty.

Said villain is Kitty Galore (voiced with relish by Bette Midler), a former agent for the cat spy organization MEOWS who has "gone rogue." Abandoned after an industrial accident rendered her hairless and looking like Eartha Kitt, Kitty seeks dominion over all pets to make the world her "personal scratching post." Her weapon of mass destruction is the "Call of the Wild" — apologies to Jack London — a screech that will render dogs insane and launch a global cat-astrophe.

But the top-secret intelligence organizations on both sides of the yard have been working overtime to thwart Kitty’s plan. Here "Cats & Dogs" mines the 007 canon to hilarious effect. MEOWS’ canine equivalent is DOG, within whose subterranean world headquarters, dubbed "where Petco meets Las Vegas," agents train, are fitted with collars containing laser beams, test jet packs and rocket cars, and, in their downtime, play poker (of course).

DOG needs backup, and finds it in new recruit Diggs (voice of James Marsden), a police K-9 German shepherd whose best qualification is his hatred of cats. He and his partner and mentor Butch (voice of Nick Nolte) set out in search of a sassy pigeon called Seamus (voice of Katt Williams), who holds vital clues to Kitty’s plan. But feline intelligence is also on the case, and special agent Catherine (voice of Christina Applegate) puts her nine lives on the line for the cause.

With the fate of the world at stake, MEOWS top cat Tab Lazenby (voice of Roger Moore, channeling his Bond past) proposes a peace pact with DOG to bring Kitty down. As "Cats & Dogs" barrels along to its explosive climax, the allies visit "Dog Alcatraz," where the notorious feline felon Mr. Tinkles (voice of Sean Hayes) — clad in a Hannibal Lecter straitjacket and echoing some of Lecter’s most famous lines — plays mind games.

As directed by Brad Peyton ("Evelyn"), "Cats & Dogs: The Revenge of Kitty Galore" has plenty of excitement, gizmos, and cute-as-a-button moments to charm and enthrall the youngsters, while their parents will enjoy the inside jokes and grown-up references. A few of these, including Catherine’s interrogation by what looks like water-boarding, and a hippy house in San Francisco where groovy cats are "hopped up on cat nip," push the boundaries of family viewing, but remain within the lines of good taste.