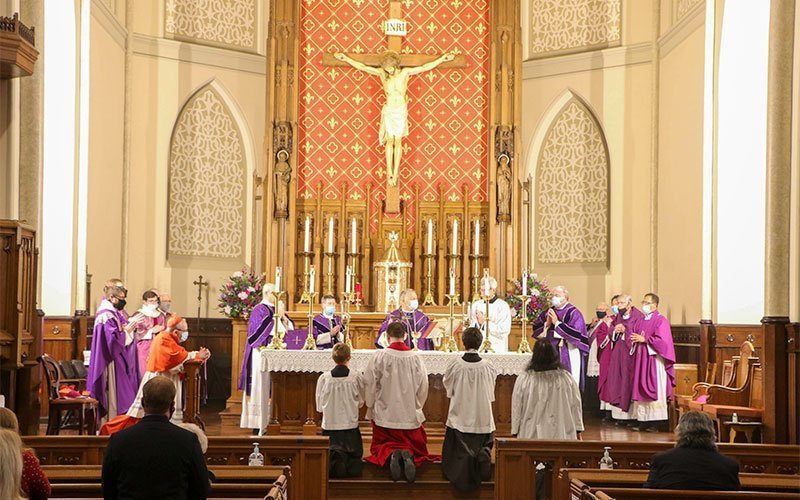 Bishop Richard F. Stika of Knoxville, Tenn., celebrates Mass at the Basilica of Sts. Peter and Paul in Chattanooga, Tenn., Sept. 28, 2020, during the opening session of the inquiry into the cause for sainthood of Father Patrick Ryan, a servant of God. (CNS photo by Bill Brewer, The East Tennessee Catholic)

KNOXVILLE, Tenn. (CNS) — The sainthood cause of Father Patrick Ryan, who died ministering to people during a yellow fever outbreak in Chattanooga, Tennessee, in the 1800s, has taken an important step forward.

On Sept. 28, at the Basilica of Sts. Peter and Paul in Chattanooga, where Father Ryan once served, Knoxville Bishop Richard F. Stika presided at the opening session of an inquiry into the Irish-born priest’s life and the installation of a tribunal to examine evidence supporting his sainthood cause.

His cause was officially opened in 2016, granting the priest the title “Servant of God.”

In remarks to a congregation of priests, deacons, religious, lay witnesses and other observers at the cathedral, Bishop Stika noted this official examination of Father Ryan’s life is occurring as a new virulent outbreak grips East Tennessee.

Father Ryan was pastor of Sts. Peter and Paul Parish from 1872 to 1878 when it was part of the Diocese of Nashville, Tennessee. He died at age 33 in the yellow fever epidemic of 1878 that swept through Chattanooga. As thousands of Chattanooga residents fled the city to escape the contagion, Father Ryan remained to serve those stricken with the illness and contracted it himself.

Bishop Stika, Father David Carter, the basilica’s rector, and the basilica staff are leading the canonization cause at the diocesan level, enlisting the help of many volunteers to promote the cause.

“I do think it ironic that as this process continues, we’re at this point again with a virus (coronavirus), with something contagious, with something of a mystery,” Bishop Stika said. “In the 1870s, not much was known about yellow fever. Maybe the causes, but not necessarily how to deal with it, just like in our day and age. We’re still trying to ascertain that.”

He added, “Maybe we can all pray, and invite others to pray for the intercession of Father Ryan, who did not abandon his people. Whether they were Catholic, or Christian, believers, or not, he saw in everyone the presence of God.”

Also taking part in the ceremony at the basilica were Cardinal Justin Rigali, a retired archbishop of Philadelphia who resides in the Knoxville Diocese, and Bishop J. Mark Spalding of Nashville.

Besides Bishop Stika, officials for the cause include Deacon Gaspar DeGaetano, diocesan postulator; Father Carter, who is the episcopal delegate and judicial vicar for the tribunal; Father John Orr, who is the promoter of justice; and several others who are serving as notaries for the official documents.

Afterward, a “Mass for the Dead for a Priest” was celebrated for the repose of the soul of Father Ryan. Bishop Stika was the main celebrant with Bishop Spalding as the principle concelebrant and diocesan priests also concelebrating.

Bishop Stika called the launch of the inquiry into Father Ryan’s cause for sainthood a special moment for the Catholic Church in East Tennessee and the entire state.

“The church holds up holy people. And the church believes that all of us are called to holiness, to recognize in each other the presence of God, to follow the Lord, to follow Jesus, to be people of prayer, of charity, kindness and compassion — all virtues that Father Ryan lived,” Bishop Stika said.

“We pray that as this process continues, someday soon I hope, within a year or so, the Holy Father will assent to Father Ryan’s cause. And then Father Ryan will be called venerable,” the bishop added.

Father Carter and Father Orr will examine the historical record of Father Ryan’s life it to ensure there is nothing in Father Ryan’s record that is contrary to the faith and moral teaching of the church. Once the record is completed, the Vatican Congregation for Saints’ Causes will review all the evidence. If the priest is recognized formally as having lived a heroically virtuous life, he will be given the title “Venerable.”

The next step would be beatification. In general, a miracle verified to have occurred by his intercession is required for beatification and a second verified miracle is needed for canonization.

Father Carter said the story of Father Ryan was already compelling, and the priest was widely known as someone who offered his life for those suffering from communicable illness. He pointed out that Father Ryan’s reputation has been reported through the years, leading to numerous media accounts of his ministry. In Chattanooga, a Knights of Columbus council is named for him as is a Knights of Columbus Fourth Degree assembly.

“The people of Chattanooga hailed him as a hero of the city for his work during the epidemic,” Father Carter said. “So we knew the cause had merit, which is why we were confident to proceed. The research has borne out our presumptions, and our hypothesis seems to have been proven.”

As for a timetable to sainthood, the priest believes that is for God and Father Ryan to work a miracle. “It is on God’s time.”

Bishop Spalding said the Diocese of Nashville shares the enthusiasm the Diocese of Knoxville has in seeing Father Ryan’s cause for canonization move forward.

He noted the Oct. 31 beatification of Knights of Columbus founder Father Michael McGivney in Hartford, Connecticut, will be a celebration for Nashville and the rest of Tennessee. A miracle attributed to Father McGivney’s intercession involved the youngest son of Daniel and Michelle Schachle of the Diocese of Nashville and led to his beatification.

Brewer is editor of The East Tennessee Catholic, newspaper of the Diocese of Knoxville.