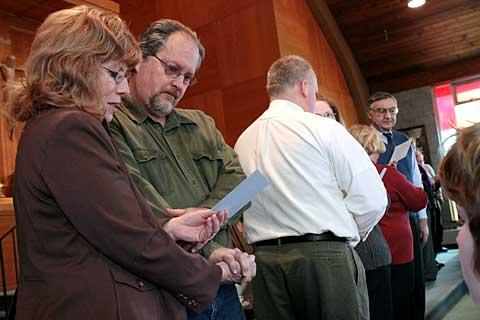 Rick Smith and his wife Rose (left) renew their marriage vows during a Jan. 31 Mass at St. Joseph Church in Weedsport.

Cecelia and Carl Bobbett have been married for more than half a century, but on Jan. 30 they reaffirmed their commitment to each other and said they’d do it all over again. The Bobbetts were among the 53 couples that renewed their marriage vows Jan. 30-31 at Our Lady of the Snow Parish’s three worship sites at St. Joseph Church in Weedsport, St. Patrick Church in Cato and St. John Church in Port Byron.

"We just thought it would be a nice thing to do after all these years," Cecelia Bobbett recently told the Catholic Courier.

The vow renewals took place during weekend Masses at the three churches and are part of a yearlong whole-community catechesis initiative, said Father John Gathenya, pastor of Our Lady of the Snow. Father Gathenya said the idea developed out of the town meetings he held for parishioners shortly after he became pastor in June 2008.

Many parishioners at those meetings expressed a desire to further their spiritual development, and Father Gathenya said he also detected a desire to "return to the basics" of the Catholic faith. He decided to address those desires through a parishwide whole-community catechesis program.

The series began a few months ago with a focus on the anointing of the sick. Father Gathenya wrote a bulletin column about the sacrament and its meaning and then offered parishioners an opportunity to receive the sacrament.

"We had a very successful celebration of the anointing of the sick," he said.

"One of the powerful things that can be an example to our children and our youth is having their parents make a renewal of their marriage vows," he said

When children see their parents renewing their vows, they see God’s grace helping their parents recommit to each other with the same love and faith they had years ago when they first married, Father Gathenya added. It will show that marriage is about commitment and faith, contrary to what children may see portrayed in secular society.

"It will be a powerful example and a testament to the parish, and also allow the youth to see that commitment, and even prove (marriage) definitely is a sacrament," he said.

Father Gathenya said he believes this will help strengthen families and in turn strengthen the church.

"I have believed that if you make the family strong in all senses, physical and spiritual, the church becomes strong. So for me, the family is the foundation for everything. A strong church needs strong families," he said.

Jennifer Wilder said her children enjoyed seeing her exchange vows with her husband of 15 years, Richard Wilder Jr., on Jan. 31 at St. Patrick Church. She and her husband were grateful for the chance to show their children their commitment to each other.

"They’re always constantly looking through our wedding album. We thought it would be good for them to see that we still feel the same way and we’d do it again," she said. "We need to do this to show our kids that attention to the marriage is important no matter how long it’s been."

The Wilder children were very proud and were "just grinning from ear to ear" as their parents exchanged their vows with a dozen other couples at the front of the church, Jennifer Wilder said. The children also attended the reception that followed in the church hall, which was exciting for them, she added.

Kathleen and Ed Timerson, who also renewed their vows, thoroughly enjoyed both the reception and the actual exchange of vows, said Kathleen Timerson, secretary for Our Lady of the Snow.

"We thought it was wonderful," she said. "We are very thankful that we’ve made it this long, and it’s not a bad idea to ask for God’s blessing."

Timerson said that while she and her husband have been married for several decades, the length of their union pales in comparison to that of the Bobbetts, who held the distinction of being the longest-married couple to renew their vows at Our Lady of the Snow that weekend.

"We’ve only been married 43 years, so we’re practically newlyweds," she quipped.

The Bobbetts, who will celebrate their 60th anniversary in October, renewed their wedding vows nearly a decade ago at their 50th-anniversary party, but even so they were grateful for the chance to exchange their vows once more, Cecelia Bobbett said. She also offered a few words of advice for newlyweds who are just setting out on their journey together.

"Just live one day at a time," she said. "Just trust and respect each other."