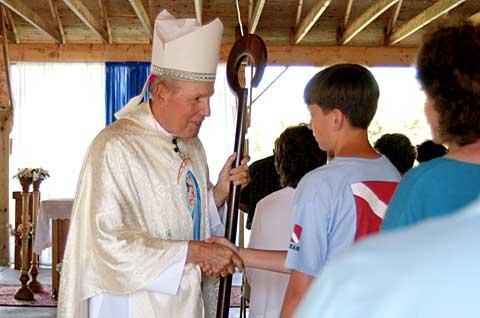 Bishop Matthew H. Clark has approved Our Lady of the Snow Parish's request to switch planning groups. Above, the bishop greets parishioners after the parish's inaugural Mass in August 2006.

In a letter dated Dec. 21, 2009, Bishop Clark gave permission for Our Lady of the Snow Parish — which has worship sites in Weedsport, Cato and Port Byron — to leave the Eastern Wayne/Northern Cayuga Planning Group and instead join the Auburn Catholic Community Planning Group.

"I do not take such recommendations lightly, since they necessitate the re-structuring of two planning groups and their membership," Bishop Clark stated in the letter. "However, I commend your thorough process of consultation within your parish, with your current planning group, and with the one you propose to join. I approve your change of planning groups."

This is the first time a parish has left the planning group to which it originally belonged and joined a new one, according to Deborah Housel, diocesan pastoral-planning liaison for the two planning groups.

"This is not the norm, and it won’t be the norm. It’s very unusual that this happens," Housel said.

Father John Gathenya said talk of switching to the Auburn planning group began shortly after he became pastor of Our Lady of the Snow in June 2008. After arriving in Cayuga County, Father Gathenya met with the parish’s pastoral and finance councils, and held a series of town meetings with parishioners so he could begin to understand the parish and learn about parishioners’ concerns.

Many parishioners expressed a desire to switch planning groups, Father Gathenya said. Through the Eastern Wayne/Northern Cayuga Planning Group, Our Lady of the Snow was linked with parishes in Clyde, Savannah, Lyons, Wolcott, Red Creek and Fair Haven. Yet most Our Lady of the Snow parishioners had little to no experience with these areas and rarely traveled to those locations.

The Auburn parishes and Our Lady of the Snow both work with the Cayuga County office of Catholic Charities of the Finger Lakes, Housel noted. In the past it had been difficult for the Eastern Wayne/Northern Cayuga Planning Group to tackle social-ministry issues because Our Lady of the Snow worked with the Cayuga County office, while the other parishes worked with Catholic Charities of Wayne County, which is a separate agency.

When Father Gathenya brought his concerns to Housel, she suggested he first bring them to the parish pastoral council, which he did in November 2008.

"Once we weighed what was working, I think we found that with all honesty, in a natural way we have more of an inclination towards Auburn than eastern Wayne (County). They unanimously voted that we should be going to Auburn," he said.

Father Gathenya and several parish representatives presented their case to the Eastern Wayne/Northern Cayuga Planning Group, and its members concurred, he said. Father Gathenya and his team then made its presentation before the members of the Auburn Catholic Community Planning Group, and several weeks later they learned the Auburn planning group was willing to accept Our Lady of the Snow.

Father Gathenya and several parish representatives then asked Bishop Clark for his permission to team up with Auburn Catholic Community.

"For the pastoral good of the people of Our Lady of the Snow he approved our request," Father Gathenya said. "Already there were connections, although not in a very formal way. In a general way it was formalization of what was already happening at a grassroots level."

In his letter of approval, Bishop Clark asked members of the newly formed Auburn/Northern Cayuga Planning Group to work together and, with the help of diocesan guidelines, come to an agreement about the new group’s structure, membership and operational methods.

The bishop also charged members of the new group with the task of finding even more ways to work collaboratively in such ministries as faith formation and social ministry.