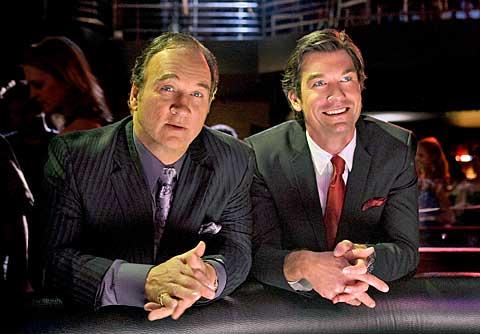 Jim Belushi as Nick Morelli and Jerry O'Connell as Pete Kaczmarek star in the TV series "The Defenders," which premieres Sept. 22 on CBS.

NEW YORK (CNS) — When you’re on top, do you play it safe or do you take risks? CBS, which has more people watching it than any other network — especially older viewers — is doing both, resurrecting a chestnut of a police drama in “Hawaii Five-O” to play it safe, and taking a big chance introducing a sitcom with a title so profane it wouldn’t be printed in newspapers. While success typically breeds success, one never knows when the next clunker will pop up.

The title of this comedy (pronounced “Bleep My Dad Says”) is based on a Twitter feed and book by Justin Halpern, also one of the writers for the series. The show stars William Shatner as Ed Goodson, an outspoken, arrogant and opinionated grouch — based on Halpern’s real-life father — who enjoys sharing his crass and often politically incorrect observations with everyone around him. Ed’s rants spare no one, including his sons: Henry (Jonathan Sadowski), a struggling writer, and Vince (Will Sasso), who owns a real estate company with his controlling wife Bonnie (Nicole Sullivan). The pilot episode concludes with Ed, in a rare paternal moment, inviting unemployed Henry to move in with him, thus setting the stage for what may be a season of crude, unsolicited advice.

Score: Emmy Award-winner Shatner’s talents are wasted in this mean-spirited role, while the tone of the script is unremittingly harsh.

Lowdown: Politically incorrect, off-color, sometimes offensive humor. Pop Goodson does try to repair his relationship with his son, Henry, but it’s not enough to make this crank of a lead character likable.

Tom Selleck returns to prime time in this multigenerational drama about a family of dedicated New York City law enforcement officials. Selleck plays Police Commissioner Frank Regan, who has the difficult task of leading his family both at work and at home. Of greatest concern is his oldest son Danny (Donnie Wahlberg), a detective, family man and Iraq War veteran who often crosses the line in his quest to uphold justice. The Regans are depicted as a close-knit family who come together for Sunday dinners, pray before their meals, disagree like any other extended family, but love, protect and support one another at all costs. Also featured are grandfather Henry (Len Cariou), a former New York chief of police; only daughter Erin Regan Boyle (Bridget Moynahan), a newly single parent and New York assistant district attorney; and youngest son Jamie (Will Estes), the “golden boy” who graduated from Harvard Law School but decided to follow in his forebears’ footsteps, abandoning the courtroom for the precinct house.

Score: This cop clan feels like a believable family. The pilot episode is well written and skillfully acted. Although some of the characters are flawed, they all seem to have a strong sense of right and wrong.

Lowdown: Adult situations and language, as well as mature themes such as post-traumatic stress disorder among Iraq War veterans and the proper limits of interrogation in the case of a murderous child molester.

This contemporary, action-packed, yet shallow take on the classic police drama (first broadcast in 1968) follows a newly established federalized task force whose mission is to clean up crime on the picturesque island. In the premiere episode, Detective Steve McGarrett (Alex O’Loughlin), a decorated naval officer-turned-cop, returns to Hawaii to investigate the murder of his father, the main character of the original series. McGarrett is persuaded by the governor to head up the new investigative team with a promise of “immunity and means.” With no rules to follow, McGarrett and his colleagues, Danny “Danno” Williams (Scott Caan), Chin Ho Kelly (Daniel Dae Kim of “Lost”) and Kono Kalakaua (Grace Park), stop at nothing to catch their man. Their relentless pursuit leads to action scenes filled with endless violence. Very little is learned about the characters and their personal lives. Danno has recently followed his ex-wife and 8-year-old daughter to the island from New Jersey. Chin is an ex-Honolulu Police detective wrongly accused of corruption and his cousin Kono is a recent graduate of the police academy. Fans of the initial version will appreciate the opening credits which feature the well-known theme music as well as the use of the once-popular catchphrase “Book ’em, Danno.”

The Score: Slick and stylish action spectacle with minimal story and character development.

This comedy centers on an overweight, working-class couple who find romance in a seemingly unlikely place: an Overeaters Anonymous meeting. Kind and friendly Chicago cop Mike Biggs (Billy Gardell) works hard to shed pounds each day with the help of his wisecracking partner Carl McMillan (Reno Wilson). Despite his constant teasing, Carl is a true friend who encourages Mike on his road to self-improvement. For cheerful fourth-grade teacher Molly Flynn (Melissa McCarthy), keeping focused on her diet is complicated by living with her pot-smoking, provocatively dressed older sister Victoria (Katy Mixon) and their mother Joyce (Swoosie Kurtz), both of whom continually flaunt their thin figures while consuming plates of chocolate cake in front of the ever-tempted Molly. Can the path to a healthier lifestyle and a smaller dress size be made smoother by love?

The Score: Though the dialogue sometimes falls flat, the leads are very true to life, likable and sympathetic.

The Lowdown: Carl’s character is used as a mouthpiece for stereotyped fat jokes as well as sexual innuendo while Victoria is portrayed as perpetually “high.” On a happier note, Mike tells his OA group how he turns to prayer to help him with his food addiction.

Irreverent legal drama focusing on a Las Vegas firm headed by defiant Nick Morelli (Jim Belushi) and charismatic Pete Kaczmarek (Jerry O’Connell), whose defense work brings them into contact with a variety of colorful clients and cases. In the premiere episode, the team pursues evidence to clear a young man wrongly accused of murder. Although within the law, the partners’ methods are far from orthodox, and their courtroom antics sometimes resemble a lounge act from the Strip. In their personal lives, Nick is a divorced father still very much in love with his ex-wife; Pete, by contrast, is a playboy whose hotel room seemingly has a revolving door. One of Pete’s affairs is a secret relationship with Meredith Cramer (Natalie Zea), an attorney for a rival firm. Back on the professional side, former Sin City “dancer”-turned-advocate Lisa Tyler (Jurnee Smollett) is the latest addition to Nick and Pete’s team.

The Score: While the gifted leads are credible, and a steady infusion of humor may keep the proceedings entertaining for some mature viewers, this is strictly off limits for youngsters.

Macina is a guest reviewer for Catholic News Service. A former producer in the television and radio department of the Christophers, her work for network TV has garnered her multiple Daytime Emmy nominations.