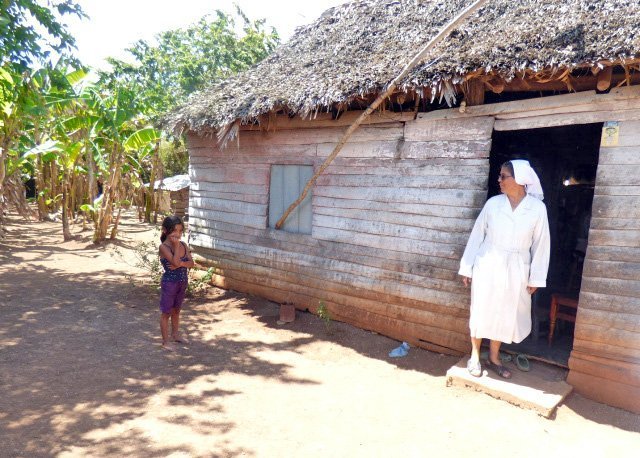 Sister Olga Arias visits a family of nine, including seven children, in early March in rural Cuba. It can be daunting to transmit the values of the church when families are focused on day-by-day survival, she said.

TLALNEPANTLA, Mexico (CNS) — The president of the Latin American bishops’ conference called Pope Francis’ planned visit to Cuba an opportunity for the church to play a larger role in a country experiencing reforms and re-embracing institutionalized religion.

"Whether we want to accept it or not, Cuba is undergoing a transformation. In this transformation, the institution with the highest expectations from Cuba society to provide a response is the Catholic Church," said Archbishop of Carlos Aguiar Retes of Tlalnepantla, Mexico, president of the council, known by its Spanish acronym as CELAM.

"The church continues being an entity with a presence across the island, with small groups, but it’s there," said the archbishop, whose archdiocese covers the northern suburbs of Mexico City. "There’s no other institution of this type that can give this response to persons so that they can express their faith in a community."

Jesuit Father Federico Lombardi, Vatican spokesman, has confirmed that Pope Francis will travel to Cuba in September, visiting the island prior to his Sept. 22-27 three-city tour of the United States. It marks the second time in less than four years that a pontiff will travel to the Caribbean country; Pope Benedict XVI visited in 2012.

The visit comes as Cuba and the U.S. work to re-establish diplomatic relations and build stronger economic ties.

Pope Francis played a role in the reconciliation. He urged both sides to start talking and the Vatican hosted secret talks between U.S. and Cuban officials. His trip was another opportunity "to promote this opening between the United States and Cuban governments," Archbishop Aguiar told Catholic News Service.

Additionally, "the concern over Cuba is very large on the part of the Catholic Church," he said.

Cuba is considered one of the least Catholic countries in Latin America and the Caribbean with just 27 percent of the population professing the faith, according to a survey by Univision and Fusion. The small number of professed Catholics is a consequence of the communist government’s policy of secularism imposed after the 1959 revolution. The Cuban church is small, but has been regaining ground since St. John Paul II visited in 1998 and restrictions on religion were loosened.

"Cuban society, regrettably, lost its religiosity. It was beaten back into an individual religiosity," expressed in forms such as Santeria, Archbishop Aguiar said. "If the Cuban Catholic Church is supported, is accompanied at this time, when there is this transformation of the Cuban society, the Catholic Church could regain its significant presence."

The trips reinforce the vision outlined in a document — edited by the pope when he was the archbishop of Buenos Aires, Argentina — at the Fifth General Conference of the Bishops of Latin America and the Caribbean in Aparecida, Brazil, in 2007. The document appealed to Catholics on the continent to make missions a priority and came partly in response to the precipitous decline in the Catholic population of many countries.

"What Aparecida proposed was to go out for (people,) that we don’t stay satisfied attending to those that have come (to church,) rather that we be willing to go for those who are distant or those that have fallen away or those that are indifferent, but continue being Catholic," Archbishop Aguiar said.

"It’s a gigantic challenge because our mentality, particularly clerical, isn’t made for this."

By visiting three of the poorer countries on the continent, the pope is continuing his policy of putting peripheral places at the center of church life, said Archbishop Aguiar.

"These are three countries that don’t count much in the Latin American outlook," he said. "They’re small with many problems, historically difficult constitutions, particularly Bolivia and Paraguay. When the pope says, ‘Go to the periphery,’ he also means, going to peripheral countries."

Many in Mexico, the world’s second most populous Catholic country, had hoped Pope Francis would pay a visit as part of his U.S. trip and possibly stop at the Basilica of Our Lady of Guadalupe in Mexico City or celebrate Mass near the U.S.-Mexico border to raise awareness of migrant issues.

"I asked him this," Archbishop Aguiar recalled. "He said, ‘Mexicans want to be the first,’" then added, "’I know that Mexico is important. I am going to make the visit.’

"He’s following a strategy of giving attention to the smallest nations because they also deserve the presence of the pope."