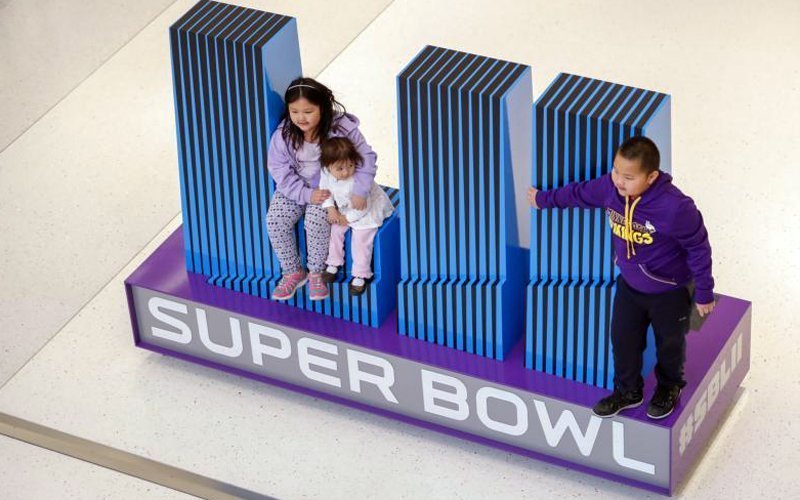 Children pose on a giant Super Bowl logo Jan. 28 at the media center in Bloomington, Minn. The NFC champions, the Philadelphia Eagles, and the AFC champions, the New England Patriots, will compete in Super Bowl LII Feb. 4 at U.S. Bank Stadium in Minneapolis. (CNS photo by Erik S. Lesser/EPA)

ST. PAUL, Minn. (CNS) — Catholic coaches and players of the New England Patriots and Philadelphia Eagles have clear game plans for making Sunday Mass in the midst of prepping for big games each week.

“I have great respect for these men. They work really hard,” Msgr. Foley told The Catholic Spirit, newspaper of the Archdiocese of St. Paul and Minneapolis. He made the comments in advance of the Feb. 4 game in U.S. Bank Stadium in Minneapolis.

Msgr. Foley, a priest of the Diocese of Worcester, Massachusetts, received a call from the Patriots’ hotel one morning in 1990 to celebrate Mass for the team’s Catholic coaches and players, and he has done it ever since. He’s not the team’s official Catholic chaplain, however; they don’t have one.

“I see it as just trying to serve,” said Msgr. Foley, pastor of St. Luke the Evangelist in Westborough.

Father Barcellona has served as the Eagles’ Catholic chaplain since 2004, the last season the team went to the Super Bowl. In addition to Mass, he offers pastoral guidance and sacramental preparation for players and coaches alike. He also attends practices and home games.

A priest of the Diocese of Camden, New Jersey, Father Barcellona said serving the team has been an enjoyable experience. His main assignment is at Our Lady of Perpetual Help Parish, made up of Assumption Church in Galloway and St. Nicholas Church in Egg Harbor City. The parish is almost 60 miles away from the Eagles’ headquarters in Philadelphia.

He’s happy to make the drive, as he sees the ministry’s necessity for the coaches and players engaged in the NFL’s demands, including substantial time away from family. “During the season, they pretty much live, breathe and eat football,” Father Barcellona said of the players and coaches.

He also helps provide priests for visiting teams across the NFL through his role on the board for Catholic Athletes for Christ. The nationwide ministry works with athletes of all levels to live the Catholic faith.

Although he normally doesn’t attend road games, Father Barcellona was hoping to come to Minneapolis for the Super Bowl, as he attended the Eagles’ previous Super Bowl in February 2005. The Eagles also faced the Patriots in that game, falling 24-21.

Msgr. Foley hasn’t been to any of the Patriots’ previous eight Super Bowl appearances in the past 21 years, and he won’t attend this year’s game in Minneapolis. However, he has enjoyed the team’s success and the opportunity to see a bright side of a sometimes scandal-marked team.

“My experience of the Patriots has been extremely positive,” he said.

Besides the Eagles’ teamwork, Father Barcellona has appreciated the Christian witness among a significant number of players, Catholic or not. That includes quarterback Nick Foles crediting God in a post-game interview after the Eagles’ Jan. 21 win over the Minnesota Vikings in the NFC title game.

“It’s a family setup,” Father Barcellona said of the Eagles.

Davis is on the staff of The Catholic Spirit, newspaper of the of the Archdiocese of St. Paul and Minneapolis.