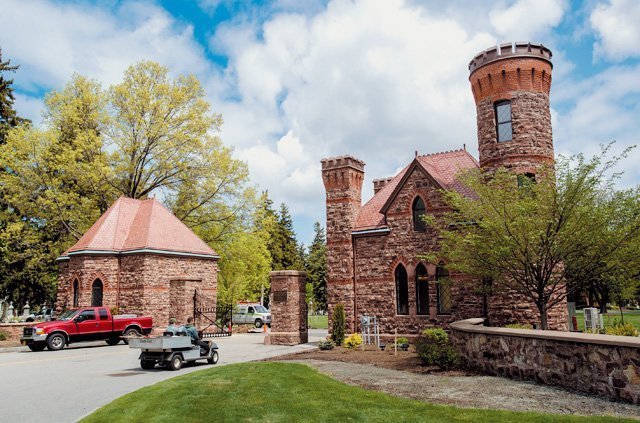 Contractors work to complete the renovations of the Holy Sepulchre gatehouses, which will be use as reception areas. The gatehouses will be rededicated on May 27.

ROCHESTER — Bishop Salvatore R. Matano will rededicate the restored gatehouses at Holy Sepulchre Cemetery during a ceremony later this month.

The gatehouses, which were built at the main entrance to the cemetery’s east side along Lake Avenue, were constructed in the early 1880s, explained Greg Kamp, spokesperson for Holy Sepulchre. The gatehouses’ construction followed the building of the chapel on the site in 1876, he said. The cemetery itself was built in 1871.

The gatehouses originally served as waiting areas for people using the horse-and-buggy transportation line that went to the cemetery, Kamp explained. The gatehouse on the south side of the cemetery entrance was for men, and the one on the north side was for women, he noted. In 1887, Bishop Bernard J. McQuaid granted a right of way for a horse-drawn trolley to operate on the cemetery line, which later connected all areas of the city to the cemetery.

Trolley rides will be available before and after the dedication ceremony, he added. He said he also is working on having replicas made of the tokens that were used for trolley rides during the cemetery’s early days.

Kamp added that the gatehouses also are historically significant because they are the only remaining local structures built by the architectural firm Warner & Brockett. The firm also designed the Kimball Tobacco Co. factory building, as well as the Elwood Building that had stood across from the Powers Building in downtown Rochester, he added. 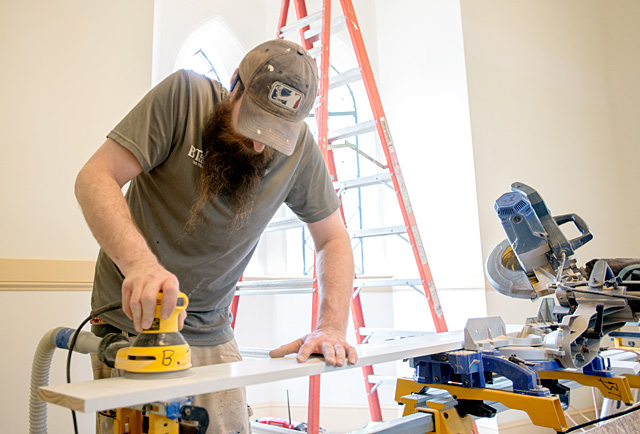 Contractor Mike Porschet works to finish the molding on the north tower of the Holy Sepulchre gatehouses, which will be used as reception areas. The towers will be rededicated on May 27.

The hope is that parish groups or other nonprofit groups may use the gatehouses as meeting or gathering spaces and that they also will be available to families as reception areas following funeral services, he noted.

The total cost of the restoration project is $400,000, said Lynn Sullivan, the cemetery’s chief executive officer. For the past 50 years, the gatehouses had only been used as storage, so this was a significant investment for the cemetery’s board to make, she added.

"(But) few operations need to be as forever as a (cemetery)," she said, adding that the hope is for people to enjoy the towers hundreds of years from now.

The project also called for new stained-glass windows, which were designed by Valerie O’Hara of Pike Stained Glass of Rochester. The windows will not be installed until just before the dedication ceremony, Sullivan explained. Other work on the gatehouses had to be completed before the windows could be installed, she said, and there also were delays along the way during the 10-month project.

"It’s amazing what you get into when you start this kind of project," Sullivan remarked.