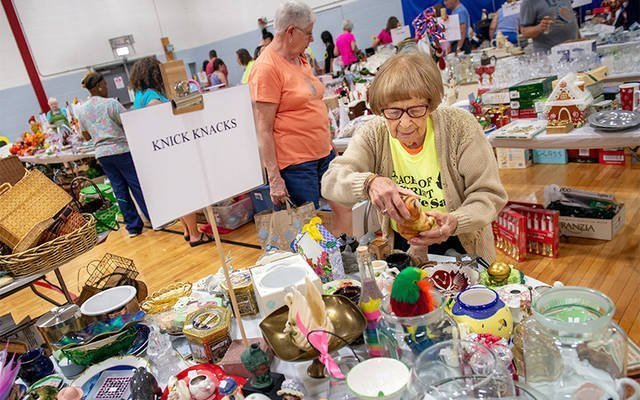 Josie Locke, a longtime Peace of Christ parishioner, works to straighten up a table of items for sale July 12 during the annual parish garage sale held at St. Ambrose Academy in Rochester. Locke turned 100 in March. (Courier photo by John Haeger) 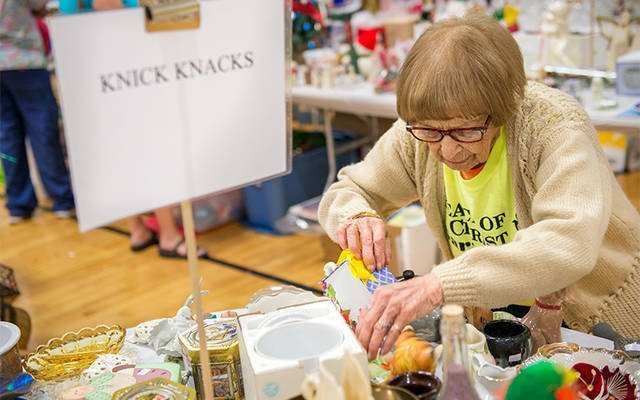 Josie Locke, a longtime Peace of Christ parishioner, works to straighten up a table of items for sale July 12 during the annual parish garage sale held at St. Ambrose Academy in Rochester. Locke turned 100 in March. (Courier photo by John Haeger)

ROCHESTER — Josie Locke has been volunteering with the annual Peace of Christ garage sale since it began 12 years ago.

Even after turning 100 on March 7, Locke helped out at the two-day sale in July at St. Ambrose Academy by dusting off donations, polishing silver, straightening out items on the tables and making sure visitors felt welcome, said Karen Francati, the sale co-chairperson.

Asked on the first day of the sale July 12 about why she continues to volunteer, Locke has a simple answer: “I love people.”

“I’m a happy girl,” she added. “Every parish (dinner) or picnic, I make things people like.”

All of the volunteers anxiously await Locke’s eggplant fritters, which Francati said she brings every year for a post-sale get-together.

“She’s amazing,” noted Francati, who first met Locke when both volunteered at an annual pancake breakfast that preceded the garage sale as a parish fundraiser. Locke also helps out with the parish Christmas basket project and greets families as they arrive for the baskets, Francati added.

“She’s very outgoing,” she said. “Everybody loves Josie. ‚Ä¶ She loves a good time, getting dressed up and putting on lipstick.”

Staying active and spending time with family and friends are key to healthy aging, added Locke, who remains in good health despite a couple of falls in recent years. Locke said she still finds it remarkable that she’s reached 100. Her daughter, Sharon, hosted a birthday brunch at The Strathallan to mark the milestone, Francati said.

“She was the belle of the ball,” she added.

Locke said she enjoyed the celebration and feels fortunate.

“I have the happiest memories,” she said.

Locke still lives in the home she shared with her husband, Louis, until his death in 2000. Her son, Rick, 61, returned home in 2010 after three decades in Seattle to care for his mother. His older sister had lived nearby until then, he said.

A Rochester native, Locke grew up in the Portland Avenue area, one of five siblings in a family headed up by Italian immigrants. Her brother bought a car that they shared, she noted of her younger days. But she was so short in stature that she said her high-school friends joked about her sitting on a pile of pillows to see over the dashboard, even though she was among the first of her friends to get a license.

She loved driving so much that she didn’t stop until three years ago.

“I miss it,” Locke said wistfully.

Despite having a car, her family was of modest means, so college was not possible and she worked for her uncle’s farm. She later worked for Eastman Kodak Co. on camera lenses but lost her job when her boss wanted the job for another friend, she recalled. She went on to work for Xerox Corp. and tested equipment — a job she held from 1965 until retirement in 1982. Coworkers made a step for her to help her handle the large machines on the job, she remarked.

Because of her petite size, Locke said she didn’t think marriage was in the cards for her. However, that all changed while visiting a friend, whose brother had just returned home after serving in World War II, Locke’s son said. It was love at first sight, even though he was four years younger, Locke said with a laugh. The couple married in 1948.

“He didn’t care” about the age difference, Locke said with a laugh. “I had a good marriage.”