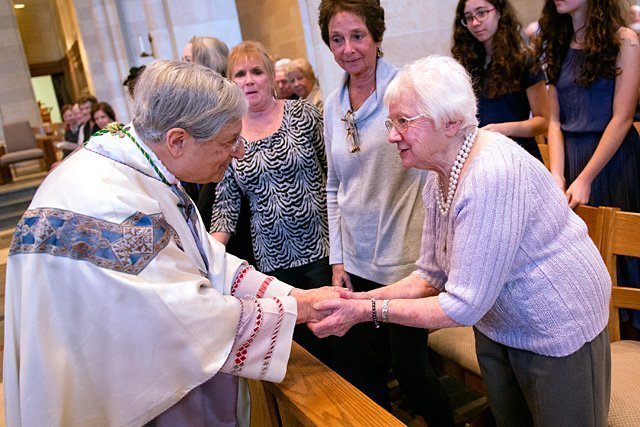 ROCHESTER — Theresa Mingoia lives by herself and does her own laundry and housekeeping.

She loves sweets and all kinds of hearty foods and often cooks for herself.

The Sacred Heart Cathedral parishioner has never used a computer or a cell phone, and her memory and hearing remain sharp.

She said she cannot believe she reached that milestone birthday, as her mother died at the age of 40. As the third oldest of 10 children, she had to step up and help out her family after her mother’s death.

That’s why she attributes her longevity to hard work, she said.

The art of the interview

On Oct. 16, her longevity and faithfulness received applause from the congregation after her 100th birthday was announced at the beginning of the Blue Mass for law enforcement personnel. Bishop Salvatore R. Matano also brought her Communion and wished her a happy birthday at the conclusion of the liturgy.

"Bishop Matano said, ‘It was a pleasure meeting you,’ " said Mingoia. "I was glad."

"She didn’t know she was going to get the royal treatment," added her daughter, Lucille Resnick.

Other parishioners also came over to Mingoia after Mass to offer birthday hugs, kisses and handshakes as she stood with Resnick and several friends.

The "church ladies," as Resnick calls her mother and her friends, attend Mass together every week and then go out for breakfast at a nearby restaurant, she said. On Oct. 16, Mingoia’s friend, Angela Boella, drove her to Mass and breakfast as she does every week.

"It’s a healthy neighborhood," joked Boella, who recently celebrated her 96th birthday and has been a nearby neighbor for nearly 60 years.

Mingoia said she appreciates Boella’s driving her every week. While she drove some when she was younger and had a driver’s license, Mingoia said she preferred walking. In years past, she would walk to Our Lady of Victory Church to pray the rosary, Resnick said. Now, she walks with a cane.

A Rochester native, Mingoia said her parents were from Naples, Italy. She graduated from Thomas Jefferson High School and married her husband, Joseph, in 1937. They had two daughters, Resnick and Carol Infantino.

Her family and her parents lived in a two-apartment home on the city’s west side until she and her husband moved to a house on the city’s north side about 60 years ago, Mingoia said.

She held jobs in shipping and receiving departments at several local manufacturers, including AC Delco and BernzOmatic, while her husband worked for Eastman Kodak Co. for 37 years. In their later years, the couple traveled to Hawaii and Arizona, but Mingoia said she never wanted to leave Rochester because her family was here.

After Joseph Mingoia died in 1990, Resnick offered for her mother to come live with her in Greece, but Mingoia refused, she said.

When Holy Rosary closed about eight years ago, Mingoia and her friends, including Carolyn McBride and sisters Marion and Carol Kuenzig, started attending Mass at the cathedral. They all had become close friends at least three decades ago through attending Holy Rosary’s coffee hours, said Marion Kuenzig.

The friends also were on hand when Bishop Emeritus Matthew H. Clark visited Mingoia at her home to mark her birthday a little early on Sept. 29.

"It was a surprise," Mingoia said. "It (the visit) turned out well."

Her family also threw her a big celebration Oct. 8 at Ridgemont Country Club. In addition to her two daughters and sons-in-law, her three grandchildren, six great-grandchildren and four great-great grandchildren were all in attendance, Resnick said.

"We had a party — it was beautiful," Mingoia said.

After the Oct. 16 Mass and brunch with her friends, though, Mingoia said she has had enough of celebrating her birthday.

During her birthday brunch, her friends said she is worthy of all the celebrations and that she has been their role model of how to age gracefully. Plus, they think she has many years left, said Marion Kuenzig.

"She’s very kind and has never said a harsh word about anybody," noted Carol Kuenzig. "And she’s an active person, sharp in mind. … She’s very wise."

"I think I am," concurred Mingoia.