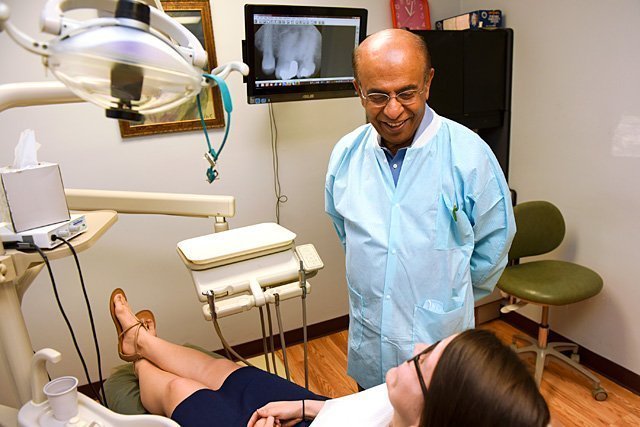 ROCHESTER — In 2011 Nikki Haynesworth was working for a small nonprofit organization, unable to afford health insurance and yet making too much money to qualify for Medicaid. So, she simply hoped she wouldn’t get sick.

"I would just kind of cross my fingers. If something horrible happened, I’d go to the emergency room," Haynesworth recalled.

Her luck ran out when she contracted the H1N1 virus and needed extensive medical care. To this day, she said, she is still paying back hospital bills related to the illness.

Yet later that year her life began changing for the better, thanks to her first visits to St. Joseph’s Neighborhood Center. She not only obtained quality, affordable medical care, but received it in a warm and caring environment, she said.

"The help they give is very genuine," Haynesworth remarked. "My experience here has helped me want to become a better person."

For the past 23 years St. Joseph’s Neighborhood Center has provided physical, dental and mental-health services to individuals and families who are uninsured or underinsured. Formed as a ministry of the Sisters of St. Joseph, the nonprofit organization has a blend of paid staff, professional and lay volunteers, and student interns from local colleges.

The center is located at 417 South Ave. According to Anne McKenna, development director, it annually serves more than 3,500 individuals who make 22,000 visits in all. Among the services offered are physicals; lab work; specialists; nutrition, diabetes and smoking-cessation education; chiropractic and massage; eye and hearing screenings; prescription assistance; gynecology; food, clothing and shelter referrals; legal and financial counseling; and assistance in gaining access to health care.

Sister Christine Wagner, SSJ, acknowledged that no other ministry in the Rochester area matches St. Joseph’s Neighborhood Center in terms of comprehensiveness.

"There’s hardly a subspecialty that we don’t get a volunteer for," said Sister Wagner, who has served as the center’s executive director since 1995.

Noting the stress that can arise from being unable to afford one’s health care, Sister Wagner said a top priority of St. Joseph’s Neighborhood Center is to integrate physical and counseling services into one operation.

"Separating primary care and mental health separates the person — and you can’t separate them," she stated.

Volunteers at the center average a total of 850 hours per month, saving the center $750,000 annually. St. Joseph’s Neighborhood Center has an annual budget of $1.3 million, nearly 80 percent of which is supported by donations. Helping to fill in the remainder are community grants and the nominal fees charged for services, such as $20 for a dental appointment and $10 to $20 for a medical or counseling visit.

Sister Wagner said that professionals who volunteer at St. Joseph’s Neighborhood Center are eager to do so.

"Many, many providers say, ‘I love coming here because I can practice medicine the way I was taught to practice, without the administrative part,’" she said.

One such person is Jay Mruthyunjaya, a dentist from Brighton, who comes in every Thursday morning. He said that he’s inspired by "the satisfaction you get treating these people as a volunteer, when you know they can’t go anywhere else."

"This is a great operation," Mruthyunjaya added.

Despite the title of "neighborhood center," clients come not only from Rochester but also the suburbs and surrounding counties. Seventy percent of them are employed — yet Sister Wagner said that despite implementation of the Affordable Care Act, too many people are still unable to afford insurance premiums and copays.

Haynesworth, for one, has gotten back on her feet in many ways thanks to St. Joseph’s Neighborhood Center. The Rochester resident joined a health and nutrition group there and gave up smoking shortly after she began receiving care from the center. Even after qualifying for her own health insurance she has stayed in touch with St. Joseph’s Neighborhood Center, and in July 2016 began a part-time job as coordinator of Women on the Move — a grant-funded initiative of the center that helps women move toward gainful employment and economic self-sufficiency.

Regarding St. Joseph’s Neighborhood Center’s multifaceted approach to improving people’s lives, Sister Wagner said she draws from edicts set down for the first Sisters of St. Joseph when they were formed in 1650 in France.

"They were told that when you go into a city, find out all the needs and, working with others — which is so important — do everything you can to address those needs and the causes of those needs. Could you have anything better as a directive?" Sister Wagner remarked.

EDITOR’S NOTE: To receive help from St. Joseph’s Neighborhood Center, or to assist the center through volunteering or donations, call 585-325-5260 or visit www.sjncenter.org.