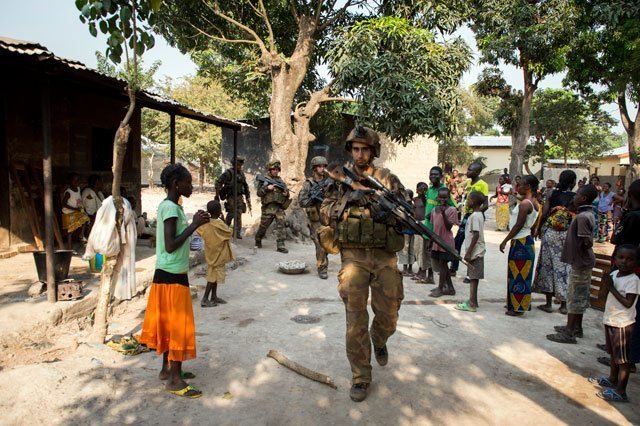 A French peacekeeping soldier patrols the streets of Bangui, Central African Republic, in 2013. Church leaders in the conflict-torn Central African Republic have insisted Pope Francis' Nov. 29-30 visit will go ahead, despite warnings that international peacekeepers may be unable to ensure his safety.
By Jonathan Luxmoore
Catholic News Service
OXFORD, England (CNS) — Church leaders in Central African Republic said the pope’s Nov. 29-30 visit will go ahead, despite warnings that international peacekeepers may be unable to ensure his safety.
"We’re full of hope the Holy Father’s presence will bring great benefits by enabling our people to achieve reconciliation; we must respond to this opportunity," said Msgr. Cyriaque Gbate Doumalo, secretary-general of the bishops’ conference. "The whole population is now actively preparing itself, and we think we can maintain security at least in the capital, Bangui. For the moment, there’s no reason or justification to place the visit in doubt."
On Nov. 11, media reported that French government officials had asked the Vatican to postpone or shorten the two-day visit, after an upsurge of
violence left at least 61 dead and 30,000 people displaced.
In a Nov. 12 Catholic News Service interview, Msgr. Doumalo said the Vatican’s Bangui-based nuncio, Archbishop Franco Coppola, had assured church leaders and security officials at a Nov. 11 meeting the pope would come, "despite current anxieties," adding that African military commanders had pledged to reinforce their 9,000-strong U.N.-backed peacekeeping forces for the event.
"Everything has been agreed and prepared in minute detail for the Holy Father’s arrival, and we’ve no alternative contingency plans," Msgr. Doumalo told CNS.
"We can’t talk about postponing the visit, since the security teams and working commissions have all done their work. Much of the violence is taking
place hundreds of kilometers away, so it can’t be seen as an attempt to sabotage the pilgrimage."
Speaking in Dakar, Senegal, Nov. 10, French Defense Minister Jean-Yves Le Drian said his government had postponed a planned autumn reduction of its 900-strong peacekeeping contingent until after the Central African Republic’s December-January elections, and he counted on its provisional rulers to create a national army "without clans, tribes and religions."
However, Agence France-Presse said Nov. 11 a Paris official had admitted French troops would not "have the means to ensure security" or manage large crowds during the papal visit. The official added that the government of President Francois Hollande now favored canceling the pilgrimage or reducing it to "a few hours only."
"We’ve let the pope know his arrival in the CAR will carry high risks for himself, and particularly for hundreds of thousands of pilgrims coming from Cameroon, Chad and the Congo," the Defense Ministry official, who asked to remain anonymous, told AFP. "Our own forces can secure the airport and provide a medical evacuation capacity for the authorities in case of an accident. But they cannot go any further."
On Nov. 7, Bangui Archbishop Dieudonne Nzapalainga, bishops’ conference president, told Germany’s Deutsche Welle broadcaster his country faced "a vicious circle of anger and hatred, violence and revenge," and had to achieve disarmament and re-establish law and justice to "stop certain people thinking they can do anything."
"It’s like a game of ping-pong: You kill, I kill, as we all descend into death and desolation," the archbishop said.
"We know the pope is close to us, the poor and unfortunate Central Africans, and will bring comfort and show solidarity, telling us it’s time to set aside our personal and political quarrels, the barbarism and hatred. When he opens the Holy Door in Bangui, he’ll also be opening a door into our hearts, and giving us spiritual, human and political support," the archbishop said.
Central African Republic has been the scene of violence since Islamists suspended the constitution in March 2013. The National Reconciliation Forum, convened by the transitional parliament in May, has brought armed factions together in preparations for the end-of-year elections and a constitutional referendum.
Before visiting Central African Republic, Pope Francis will visit Kenya and Uganda.
Copyright © 2022 Catholic News Service, Inc. All rights reserved. Linking is encouraged, but republishing or redistributing, including by framing or similar means, without the publisher's prior written permission is prohibited.