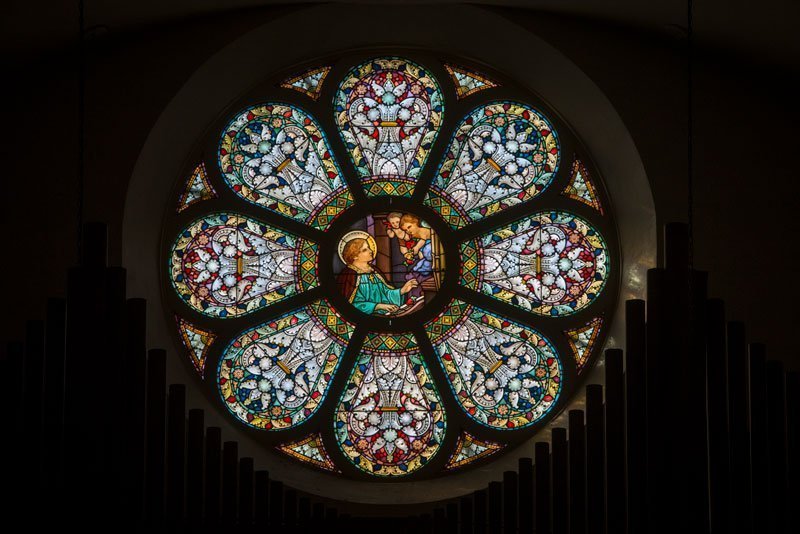 Community of the Blessed Trinity

The three faith communities that came together in 2006 to form this parish had worked together as a cluster since 1985.

‚Ä¢ St. Thomas the Apostle was founded in Red Creek in 1876. In 1943 a lightning strike caused a fire that destroyed the church, which was rebuilt later that year and has been renovated several times since.

‚Ä¢ St. Mary Magdalene was established in 1940 in an effort to relieve St. Thomas’ overcrowding in the summertime. The Wolcott church initially was a mission of St. Thomas, but became a parish in its own right in 1954 and was enlarged in 1966.

‚Ä¢ St. Jude Chapel was established as a further attempt to stem seasonal overcrowding in Red Creek and Wolcott. The Fair Haven worship site originally was an Odd Fellows lodge, but was purchased and converted into a church in 1962., with many of the chapel’s furnishings donated by local parishes and individuals The chapel is open during the summer months.

Our Lady of Peace

Geneva’s two Catholic churches officially came together as a parish in 2007, but their roots together go back more than a century.

‚Ä¢ Irish immigrants began building St. Francis de Sales Church in 1832, and the parish was officially founded three years later. In 1860 parishioners built the current, larger church on the site of the original structure. It was added onto several times over the years and repaired after a fire heavily damaged the structure in 1965.

‚Ä¢ By the turn of the 20th century Italian immigrants had begun to flock to Geneva, leading to the establishment of St. Stephen was established in 1904. The parish’s first Masses were held in a former Dutch Reformed Church building, and construction of the current church began in 1910. The St. Stephen campus also is home to St. Francis-St. Stephen School, which formed when schools of the two Geneva churches merged in the early 1980s. It currently offers preschool through eighth grade.

Our Lady of the Lakes Catholic Community

Our Lady of the Lakes Catholic Community is nestled among the hills and valleys between Canandaigua, Seneca and Keuka lakes. The parish, formed in 2008, comprises worship sites in Penn Yan, Prattsburgh, Stanley and Naples.

‚Ä¢ St. Michael was founded in Penn Yan in 1850. Parishioners enlarged their original frame church in 1863 and worshipped there until 1901, when construction began for the current church. The parish school, added in 1883 and enlarged in 1955, continues to educate children in preschool through fifth grade.

‚Ä¢ St. Patrick was founded in 1868 as a mission of St. Gabriel Parish in Hammondsport to serve the Irish immigrants who had begun to settle in the Prattsburgh area in the early 1850s. Parishioners still worship in St. Patrick’s original frame church, which has been renovated and expanded several times.

‚Ä¢ The roots of St. Theresa date back to 1875, when Irish railroad workers in Stanley began gathering to celebrate Mass. The cornerstone for the new parish’s church was laid the following year. The church was renovated in the 1960s and 1970s, and remains in use today.

‚Ä¢ St. Januarius was founded in 1876 and parishioners worshipped in the Naples Town Hall until their church was constructed in 1878. The parish acquired its first resident pastor in 1919, and in 1965 construction began on the current church, which was renovated in 2011. In 1976 Bishop Joseph L. Hogan dedicated the parish shrine to Our Lady of the Grapes.

St. Benedict Parish was formed in 2012 through the merger of parishes in Canandaigua and East Bloomfield, but Catholic communities in the two towns had been intertwined for generations.
‚Ä¢ St. Mary was founded in Canandaigua in 1844 with 15 Catholic families, and its first church was built the following year. As the parish grew the need for a larger church became evident, and the current structure was completed in 1905. St. Mary School, founded in 1849, still provides Catholic education for students in preschool through eighth grade.

St. Peter Parish formed in 2012 when the churches in Shortsville, Clifton Springs and Phelps merged, solidifying a bond that had existed between them for more than 100 years.

‚Ä¢ Originally known as St. Agnes, the oldest of the three faith communities was founded in 1855. In 1896 the current church building was completed and dedicated, and the Clifton Springs parish was renamed St. Felix in honor of its pastor, Father Felix O’Hanlon.

‚Ä¢ St. Francis was founded in Phelps in 1869 as a mission of the Clifton Springs church and acquired its first resident pastor in 1885, becoming a parish in its own right. The current church was built in 1931. In the 1990s St. Francis formed a cluster with St. Felix.

‚Ä¢ In 1885 St. Dominic was founded in Shortsville as another mission of St. Felix. Parishioners worshipped in a frame church until 1900, when the current church was built. A fire damaged the church in 1929, but the structure was repaired and enlarged.

St. Katherine Drexel formed in 2010 from the merger of parishes in Palmyra and Macedon in Wayne County.

‚Ä¢ St. Anne was founded in 1850, although construction of the Palmyra church did not begin until 1859. Parishioners began using the church in 1860 even though it was not completed until 1870. A leaking gas main in 1942 caused an explosion that heavily damaged the church, but the building was quickly repaired and later renovated in the 1980s.

Parishes in the northern Wayne County communities of Ontario, Sodus and Sodus Point came together in 2009 to form St. Maximilian Kolbe.

‚Ä¢ St. Mary of the Lake was founded in 1869 and its first church was built in 1879. The Ontario faith community grew steadily, and the parish acquired its first resident pastor in 1915. Construction of the current church began in 1965 and was completed the following year.

‚Ä¢ Catholics of Sodus began gathering for weekly Mass in a room above a local market several years before Church of the Epiphany was founded in 1922. Construction of the church began soon thereafter and was completed in 1924. The parish temporarily was a mission of St. Mary of the Lake from 1934-42.

Seneca County’s youngest parish was formed in 2012 through the merger of faith communities in Seneca Falls and Waterloo. Yet the roots of the two former parishes go back nearly 200 years.

‚Ä¢ The origin of St. Patrick dates to 1831, when several Irish families founded the Catholic Society of Seneca Falls. They worshipped in the small St. Jerome church until 1848, when they built the new St. Thomas Church. In 1862 that structure was enlarged and renamed St. Patrick. The cornerstone for the current church was laid in 1929.

‚Ä¢ In 1846 a priest from Auburn helped Catholic families in Waterloo found St. Mary and build their first church. The parish received its first resident pastor in 1854. In 1873 the cornerstone was laid for the current church building, which was dedicated in 1889. St. Mary’s bell tower and pipe organ were completed in 1900.

St. Joseph the Worker formed in 2012 from the combination of three churches in southern Wayne County.

‚Ä¢ St. John the Evangelist was founded in Clyde in 1840 and its first church was built in 1851. Construction of the current church began in the spring of 1869 and was concluded in 1870. and that year parishioners attended Christmas Mass in their partially completed church Construction concluded in 1870, and The bell tower was finished in 1901.

‚Ä¢ Masses were celebrated at parishioners’ homes for the first few years after St. Michael was founded in Lyons in 1848. In 1852 the parish purchased a church building and acquired its first resident pastor. It temporarily was a mission of St. John from 1859-76. Ground was broken for the current church in 1890.

‚Ä¢ In 1875 Savannah’s Catholics founded St. Patrick and built a wooden church, which housed the parish for nearly a century. The cornerstone was laid for the current church in 1964, and construction concluded two years later. For most of its existence the church was a mission of St. Patrick.

In 1855 this Newark parish was established as a mission of St. Michael in Lyons. It began with just 40 parishioners, but by 1876 the population had tripled and in 1897 the parish began constructing a new church. The building was completed in 1903, the same year St. Michael became a parish in its own right. The church was enlarged in 1912 and renovated in 1988.

In 1856 Victor’s Irish immigrants began constructing a frame church. Priests began celebrating Masses inside St. Patrick even before construction had been completed, and for some time parishioners brought their own chairs to Mass. St. Patrick initially was a mission of St. Ann in Palmyra and later of St. Bridget in East Bloomfield, but in 1882 it became a free-standing parish. Ground was broken for the current church in 1924.