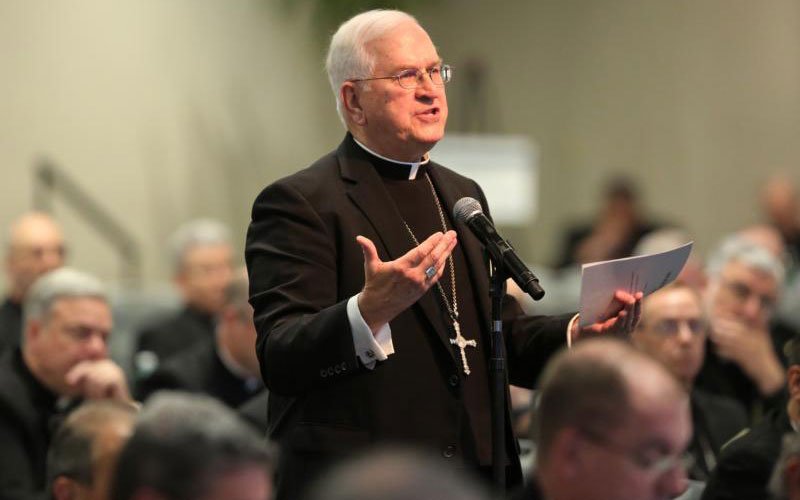 FORT LAUDERDALE, Fla. (CNS) — Challenges to religious freedom continue to emerge and the U.S. Catholic Church will remain steadfast in addressing them to serve the common good, Archbishop Joseph E. Kurtz of Louisville, Kentucky, told the spring assembly of the U.S. Conference of Catholic Bishops.

In his report as chairman of the bishops’ Committee for Religious Freedom, the archbishop said June 14 that such efforts are rooted in a vision to protect human dignity and support family and the gift of sexuality.

While some challenges have been overcome, such as the contraceptive mandate in the Affordable Care Act that forced religious institutions and people of faith to violate their faith, it does not mean they have ended, he said.

“Perhaps the greatest challenge is what we might call what’s happening in the court of public opinion,” Archbishop Kurtz said. “Public polling tells us in many ways people 60 years of age and older often appreciate the threats to religious freedom, but younger generations are not. People seem to be swayed by those who characterize religious freedom as ‘a license to discriminate.’ We know this to be farthest from the truth, but that doesn’t mean it doesn’t hold sway.”

In response, he explained, the committee has developed a plan to change the narrative about what religious freedom truly means.

The effort will include “choosing our language carefully” through the use of “inspiring and relatable language that promotes the “gift” of religious freedom, he said. He used the example of faith-based agencies that face the threat of government shutdown because of their religious or moral convictions.

The effort will focus on keeping the needs of children first, Archbishop Kurtz said. “We also have emphasized that this is not the time to limit those agencies that are able to serve children and we’ve urged the need to make space in our culture to offer service with integrity of faith,” he said.

A second component will focus on telling stories of people facing questions of conscience, such as a nurse who was forced to assist in carrying out an abortion.

The committee’s next action was to focus on Religious Freedom Week, set for June 22-29. The observance begins on the feast of two English martyrs who fought religious persecution — Sts. John Fisher and St. Thomas Moore — and ends on the feast of two apostles martyred in Rome, Sts. Peter and Paul.

Archbishop Kurtz said a series of eight brief videos examining various issues related to the free practice of faith were planned to be released for the week. Its theme is “Serving Others in God’s Love,” and Catholics are being encouraged to pray and act in support of religious freedom in the U.S. and elsewhere.

He encouraged the bishops to participate through activities in their own dioceses.

Protecting religious freedom is a “legacy” of the bishops, he said, that started with Archbishop John Carroll, the country’s first prelate, who was appointed in 1789.