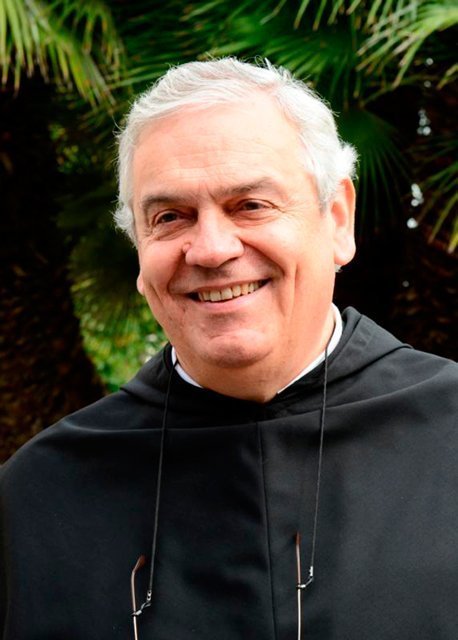 Servite Father Ermes Ronchi is pictured in Rome in this Sept. 29, 2012, file photo. The preacher told told Pope Francis and senior members of the Roman Curia that it is tempting to bristle when the faithful ask challenging questions, but he is certain it is a sign of how seriously they take the faith.

VATICAN CITY (CNS) — At the end of a Lenten retreat focused on questions in the Gospels, Servite Father Ermes Ronchi told Pope Francis and senior members of the Roman Curia that it is tempting to bristle when the faithful ask challenging questions, but he is certain it is a sign of how seriously they take the faith.

"It gives me hope to see how, among the people of God, questions continue to grow and no one is content with the same old answers," Father Ronchi told the retreatants March 11 during his last talk before the pope and Curia members returned to the Vatican.

"When everyone silently accepted the word of a priest was it a time of greater faith," he asked. "I think the opposite is true and even if this means more work for us, it is also an ‘alleluia,’ a ‘finally.’"

Mary’s question — "How can this be?" — in response to the Annunciation was Father Ronchi’s focus for the final meditation at the March 6-11 retreat at a center run by the Pauline Fathers in Ariccia, 20 miles southeast of Rome. While the retreat was private, Vatican Radio and L’Osservatore Romano, the Vatican newspaper, provided coverage of Father Ronchi’s talks.

"Being perplexed, asking questions is a way of standing before the Lord with all of one’s human dignity," the Servite said. Like Mary, "I accept the mystery, but at the same time I use my intelligence."

"No one ever said that a rock-solid faith is better than a faith interwoven with questions," Father Ronchi said; questioners know and show that they need God and need dialogue with him.

In a reflection March 10, Father Ronchi looked at the risen Jesus’ words to Mary Magdalene outside the empty tomb, "Woman, why are you weeping?"

"The first words of the Risen One in the garden on Easter," he said, "have an extraordinary tenderness: ‘Tell me about your tears; they are more important to me than anything.’"

The preacher insisted that "God’s archive, his memory," is not full of lists of people’s sins, but of their tears and suffering.

Stopping, listening and touching those in pain was Jesus’ response to tears and must be the response of his followers, Father Ronchi said. But, unfortunately, "centuries of moralism have turned the works of mercy into reluctant obligations, as if they were the price of salvation."

His talk about tears followed an evening meditation March 9 on Jesus’ question to the woman caught in adultery. After Jesus told the crowd that whoever was without sin should cast the first stone, the crowd left and Jesus asked the woman, "Has no one condemned you?"

Father Ronchi said, "Those who love to accuse, who get drunk off the defects of others, think they are safeguarding the truth by stoning those who err. But it is how wars are started" between countries or within communities, including churches.

In the Gospel story, he said, "the judgment against the woman caught in adultery boomerangs against the hypocrisy of the judges: No one can throw the first stone because they would be hurling it at themselves."

The Gospel story does not minimize the woman’s sin, he said, but illustrates Jesus’ focus on helping her turn her life around; "Go, and from now on do not sin any more," Jesus tells her.