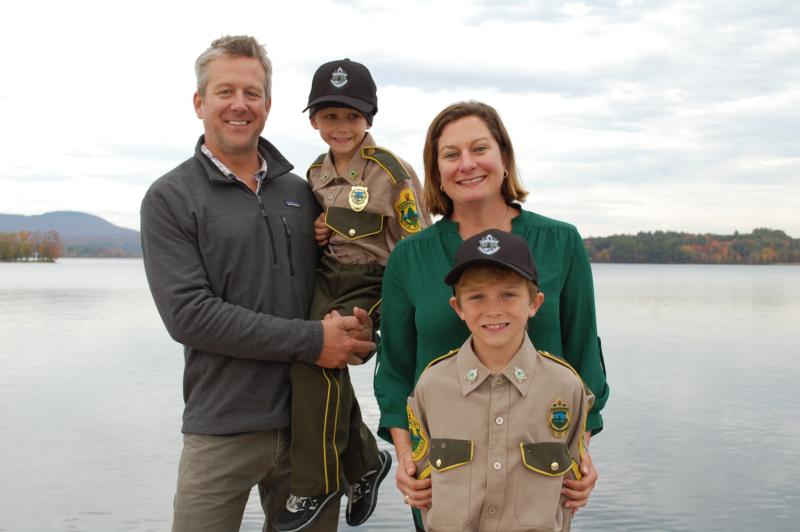 Andrew, Bennett, Katherine ("Kakki") and Chase Stenger pose on the shore of Lake Memphremagog in Newport, Vt., Oct. 13 after the boys rode on a state police boat as part of a Make A Wish adventure. Bennett is undergoing treatment for cancer.

BARTON, Vt. (CNS) — Several uniformed Vermont State Police officers arrived at St. Paul Catholic School in Barton just after students had posed on the hillside next to the white clapboard church for an all-school photo.

Heads turned to the driveway as the officers pulled up, got out of three cars and walked onto the playground.

Only two in the gathering were surprised: The two children law enforcement sought.

They had come for 5-and-1/2-year-old Bennett Stenger and his 8-year-old brother, Chase.

The men and women representing the Vermont State Police made the boys honorary officers for the day Oct. 13, granting a wish for Bennett, who was diagnosed in February with rhabdomyosarcoma of the prostate, a tumor that had also invaded his rectum and bladder.

The brothers had no idea that Bennett’s wish would be granted that day through the Make-A-Wish Foundation of Vermont. "All this is a big surprise," said their mother, Katherine "Kakki" Stenger.

But the rest of the school community knew and kept the secret until the police arrived. Some children retrieved signs of encouragement like "Have a wonderful day ‘Officer’ Bennett," "Super Bennett," "We love you Bennett and Chase" and "Team Bennett."

The boys disappeared into the school to don the uniforms with the help of their mother and their father, Andrew "Andy" Stenger.

After a pause for photos, the boys were whisked away in a caravan of police and reporters’ vehicles as schoolchildren smiled and waved.

After a fast 18-mile Interstate 89 ride to Newport, the boys and their father put on lifejackets for a ride in a state police marine boat on Lake Memphremagog, which stretches between Vermont and Quebec.

A shy boy, he acknowledged being a state trooper for a day was a good surprise before burying his head in his mother’s shoulder.

"It’s all about the kids. Whatever we can do to make this kid’s day bright we will do," said Vermont State Police Sgt. Sean Selby. "The state police is a family-orientated organization."

He told Vermont Catholic, the magazine of the Burlington Diocese, that it was fun to be part of such a positive experience for the boys, and "not only have to deal with the bad parts" of society.

After the boat ride on Lake Memphremagog, the state police took Bennett and Chase to the Derby Fish and Game Club grounds, where they saw four other special teams at work.

"Good job, B," Andrew Stenger called to his kindergartener son, clad in eye and ear protection as he detonated the charge on one of the pumpkins. "You guys did good out there," he told his sons.

The boys also participated in a mock vehicle stop and arrest, complete with handcuffing.

The day culminated with a barbecue at the state police barracks.

"This was more than I ever could have imagined," said Judy Moulton, an official wish-granter for the Make-A- Wish Foundation of Vermont. This was her first time working with the state police.

What she thought would be a couple of troopers showing up to shake hands with Bennett turned into a day of events, she said at the fish and game club. "It just exploded."

"It’s amazing that people do this and they are not asking for a thank you, they’re not getting paid," Kakki Stenger said. "They’re doing it out of the goodness of their heart. When people hear a child is sick, it’s so heartbreaking because it just doesn’t seem fair. Life is hard enough. You just want it to be easy when they’re children."

"This day won’t cure his cancer, but it allows him to forget that he’s got the trouble and the bad stuff going on around him, like the treatment," said Joshua Kelley, an eighth-grader at St. Paul School. "It will fill him with hope because it allows him to think about the future. The fact that he’s getting through this now and can plan for the future is a great thought."

He said wishes are "magical and something that kids should hold on to" because their wishes sometimes come true. But "prayers are more serious and reserved … prayers to God may help others get through their tasks on a daily basis."

Every person of faith makes wishes along with their prayers, commented Father Timothy Naples, pastor of Most Holy Trinity Parish, which includes St. Paul Church in Barton. "A wish is something that we would really like, but which we know we should not bug God too much for in a selfish way. Yet sometimes God’s answer to our prayers is precisely in granting one of our wishes."

Joshua said people are praying for Bennett’s cancer to disappear, "but Make-A-Wish has granted the family and his friends with a wish of hope that there’s more to his life after this disease."

Joanne Beloin, principal of St. Paul School, presented a check for $300 to Make A Wish Foundation after Bennett’s special day with the state police, the proceeds from a school fundraiser.

Asked if she thought she had a future state police trooper in her family, Kakki Stenger replied, "You never know."

Bennett’s prognosis is good: There is about an 85 percent success rate with treatment for his kind of tumor, his mother said.

"As hellacious as this has been — and it truly has been hell — there have been some moments full of grace and love and joy," she concluded. "During some of our darkest times, there have been rays of light: the love and support from people we know and people we don’t; the prayers coming from all over."

And a wish come true.

Fugere Urban is a staff writer at Vermont Catholic, the magazine of the Diocese of Burlington.