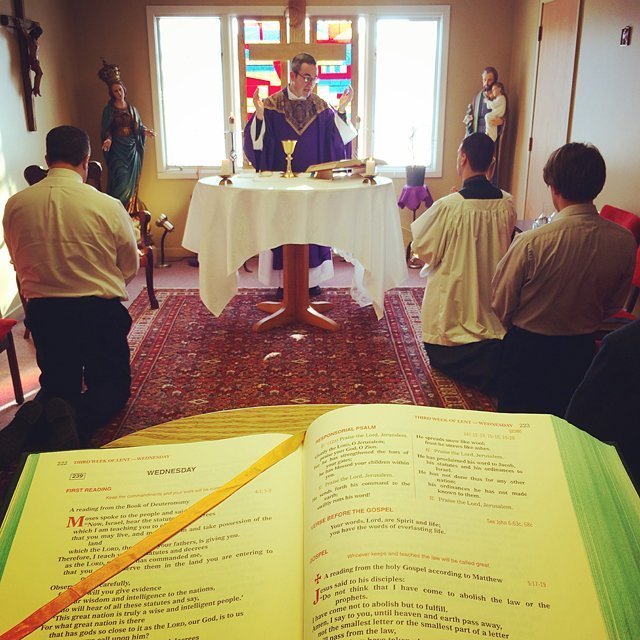 As Becket Hall observes its 50th anniversary this year, some changes lie ahead for the diocesan pre-theology program.

Details of the restructuring are outlined in a new document issued by Bishop Salvatore R. Matano: "Fostering Vocations: Walking With Those Who are Discerning the Call to Priesthood With the Diocese of Rochester." The document was released to diocesan priests May 1.

Although the diocese will continue its many efforts to assist discerners — those seeking to determine whether they are being called to vocation — "Fostering Vocations" states that the local residence for men working on their pre-theology requirement is being dissolved. Instead, candidates who are accepted for pre-theology by the Diocese of Rochester will engage in at least two years of pre-theology studies at an established seminary program outside of the Diocese of Rochester.

Father William Coffas, current director of Becket Hall, said the changes will take effect this summer, with the diocese looking to send a total of six men to pre-theology. They will be placed in seminary programs "based on each individual’s strengths and gifts, and the needs of the diocese," he said.

As part of this transition, the title "Becket Hall" is being changed to "Becket Program" and will apply only to men in discernment who have not yet begun pre-theology. According to "Fostering Vocations," the Becket Program will offer vocational talks, small-group gatherings and access to priestly spiritual directors, and be conducted in parish settings throughout the diocese for men who are working or enrolled in other academic programs.

"The Becket Program will not refer to a residential location, but rather a stage in the discernment process so that a potential candidate can utilize and ultimately benefit from the Church’s assistance as he considers God’s call in his life," Bishop Matano wrote. He also noted that "with the policy of sending candidates to two years of pre-theology, the discernment aspect of the Becket Program will become even more essential."

Father Coffas will oversee the Becket Program while also serving as pastor of Greece’s Our Mother of Sorrows Parish, a new role he assumes in late June. The priest added that Mother of Sorrows will serve as the home base for Becket gatherings.

Meanwhile, Father Paul Tomasso — who is leaving the pastorate of Our Mother of Sorrows to become diocesan vicar general and moderator of the curia — will continue in his position as diocesan director of seminarians. Father Timothy Horan — pastor of Holy Trinity in Webster — also will remain as director of the Office for Priesthood Vocation Awareness.

At its inception in 1965, Becket Hall was a residential facility for men taking pre-theology courses at St. John Fisher College. In recent years. the men also have taken classes at St. Bernard’s School of Theology and Ministry and Nazareth College.

Becket Hall currently is located at the former rectory of St. Thomas More Church in Brighton. However, Bishop Matano noted in "Fostering Vocations" that "a stable number of residents" is necessary for a conducive community atmosphere, as stipulated by No. 258 in Program of Priestly Formation, fifth edition. That document, issued by the United States Conference of Catholic Bishops, is "the normative guide to be observed in seminaries and dioceses," Bishop Matano said.

The bishop pointed out that "within recent years there has been a relatively small number of men from the diocese who have made up the Becket Hall community. This has provided difficult in past years and the communal dimension of formation has been less than ideal."

Father Coffas noted that only three men lived at Becket Hall this past year.

Additionally, due to diocesan priests’ obligations in parish ministry, Bishop Matano said it has been difficult to provide enough clergy as on-site staff for Becket Hall residents His letter cited No. 353 in Program of Priestly Formation, which notes that "full-time priest faculty, who also serve as spiritual directors and formation mentors/advisors, as a rule, should reside in the seminary (insofar as possible)."

Despite the changes to take place, Bishop Matano emphasized that the diocese has "continued plans to promote and foster priestly vocations in the Diocese of Rochester while still providing the highest level of education and formation to our seminarians."

Father Coffas added that he expects a continuation of strong efforts from the diocesan-vocations awareness team, which has yielded notable success as of late. The four men being ordained June 20 at Sacred Heart Cathedral — Deacons Michael Fowler, Matthew Jones, Daniel Ruiz and Carlos Sánchez — represent the diocese’s largest priestly ordination class in 30 years.