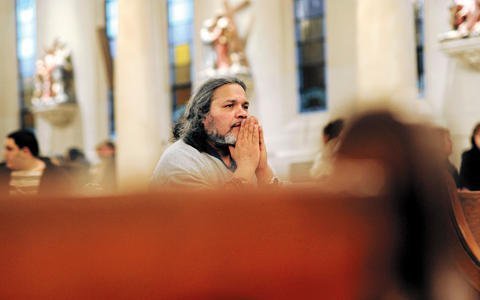 Deacon Jorge Malave prays during an April 2009 reconciliation service at Our Lady of Perpetual Help Church in Rochester.

Major financial concerns and population shifts have led a planning team to recommend merging a cluster of five northeast Rochester churches into a single parish with three worship sites: Light of Christ at Church of the Annunciation, 1754 Norton St.; Our Lady of the Americas, 864 East Main St.; and St. Michael, 869 North Clinton Ave.

Parishioners learned of the recommendation — which still must be approved by Bishop Matthew H. Clark and the diocesan Presbyteral Council — at Masses the weekend of Oct. 23 and 24.

If approved, the recommendation would lead to the closure of Light of Christ at St. Andrew, 923 Portland Ave., and Our Lady of Perpetual Help churches, 1089 Joseph Ave., but planners note that the closings would allow all the existing ministries of all five parishes to be maintained. Ministries also could be expanded or replicated in other locations, said Deb Housel, a diocesan pastoral-planning liaison who is coadministrator of the cluster.

"Our main goal is debt reduction and to not lose but to enhance and to add to outreach ministries in the city," Housel said. "The only way we can do that is … to give up buildings."

Pressing issues facing the five parishes were first outlined in a letter read at Masses on June 26 and 27. In that letter, Bishop Clark noted that declining attendance, population shifts, high building operational costs and severe financial stresses motivated a committee of clergy and lay people to plan together how to best serve the northeast area of Rochester.

"It is my hope that such a combined planning effort … will result in a creative, financially sustainable plan to deal with the current realities — a plan that will look at various scenarios and configurations, new models of Church and the best ways of ministering in this area of considerable need," Bishop Clark wrote.

Also in June, Housel and Father Paul Gitau were appointed to one-year terms as coadministrators of the clustered parishes. Housel said a committee made up of four representatives from each parish outlined priorities. Maintaining outreach was ranked first, reducing the debt was second, and staffing and buildings ranked in third place.

The cluster planners have proposed a schedule of six Masses, including several in English and several in Spanish, and a seventh Mass that would be geared for youths of the parish.

Housel said planners are still working to determine what configuration of buildings would be best for the parishes’ ministries, and are considering continued use of buildings that belonged to parishes that were previously closed. Unused rooms in rectories and other facilities are being considered for expansion or relocations of ministries.

As one example, she said that some planners have suggested adding at St. Michael a teen drop-in center that would replicate a successful neighborhood-outreach program at Light of Christ at St. Andrew.

She said money also would be set aside to renovate Church of the Annunciation and make it wheelchair accessible. A reduction in staff serving the cluster also is planned, but a new pastoral associate position would be created to coordinate outreach ministries. If the recommendations are approved, the cluster would then set a time frame for implementation.

The merger recommendation comes as the diocese kicks off a new Urban Initiative, which aims to promote new models of faith communities, coordinate attention to social justice, foster urban/suburban/rural parish partnerships, and establish ongoing structures for collaboration and learning.

According to a memo from diocesan Parish Support Ministries, the initiative will involve small groups identifying pilot projects to address those goals. After receiving approval from Bishop Clark, the pilot projects would be implemented in the next two to three years to drive change and be replicated in multiple locations.

Housel and the planning team said they hoped that longtime parishioners will not abandon the city churches due to the changes, even though the plans may be difficult to accept.

"We pray that all of the parishes will work together in order to work through these difficult changes," noted a statement from the planning group.

Parishioners at the St. Andrew and Our Lady of Perpetual Help expressed regret at the announcement, but they said they had anticipated it.

"It wasn’t unexpected, but we didn’t see it coming that fast," said Gary Knights, a 61-year parishioner of Our Lady of Perpetual Help, who has been involved with the pastoral council but was not a part of the planning team.

Knights said he didn’t know which criteria were most important to planning-team members, but that Our Lady of Perpetual Help and Light of Christ at St. Andrew churches probably would be easiest to sell as compared to the other churches in the cluster. Knights said another factor that may have counted against Our Lady of Perpetual Help is its proximity to St. Stanislaus Church, a Polish parish in the planning group that was not part of the parish cluster.

"We’re all basically in the same boat in that we are in a poor area, but unfortunately for our particular parish, we are a stone’s throw away from St. Stan’s," said Knights, who noted he would most likely attend St. Stanislaus if his parish were to close.

At Light of Christ Parish at St. Andrew on Oct. 24, several parishioners said they, too, had anticipated the announcement.

"We had the feeling that this was going to happen," said Joe Schwan, who has attended St. Andrew for more than 60 years. "The church is very expensive to run, as much as we love it."

He noted that St. Andrew has been an anchor for the neighborhood around it, and its closing will be a loss for the entire area. That was a sentiment echoed by several other parishioners.

"It’s heartbreaking," said Amanuel Malik. "As you can see, everybody is expressing their emotions. I don’t know if there is any dry eye in this church. But personally, it doesn’t surprise me. The writing was on the wall."

Malik and his family moved to Light of Christ Parish two years ago from St. Bridget Parish in Rochester, which had experienced attendance declines and whose congregation moved to Rochester’s Immaculate Conception Parish. Speaking from that experience, Malik said it is heartbreaking to see the bonds of a community disintegrate.

Yet he said he maintains his faith.

"With any difficult decision, good or bad, we’re Christians," Malik said. "We have to accept it with faith that God has something good in store for us. Meanwhile, as we are human beings, we have to go through the heartbroken experience, but I’m sure God is on our side."