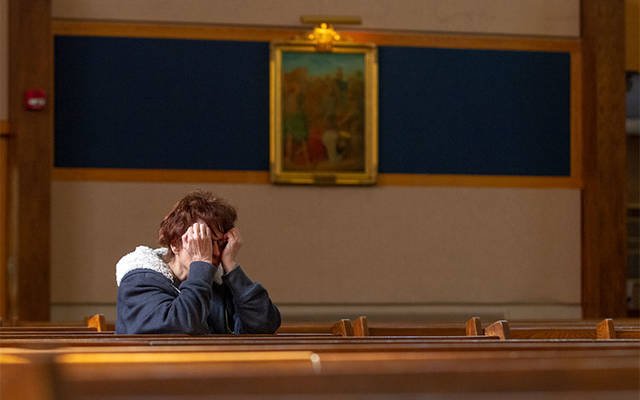 A parishioner of Our Mother of Sorrows in Greece kneels in prayer during the 2014 Day of Penance and Mercy.

The seventh-annual diocesan Day of Penance and Mercy is undergoing changes intended to help more Catholics rediscover the sacrament of penance.

This year’s Day of Penance and Mercy has been scheduled for March 13, creating an opportunity for people throughout the 12-county Diocese of Rochester to achieve a state of grace just a week into the penitential season.

Don Smith, diocesan coordinator of sacramental catechesis and family life, said the Day of Penance and Mercy is being held earlier in Lent this year at the request of the diocesan Presbyteral Council. Council members hope that people who attended Mass on Ash Wednesday, March 6, will return to church a week later to celebrate reconciliation, Smith said.

“The priests’ council, during their conversations, decided that the Day of Penance is really geared towards those that are not regular recipients of the sacrament,” Smith explained. “There are a lot of people at Ash Wednesday Masses that may not be at Mass again until Easter. The hope is that (priests) can promote it at Ash Wednesday (Masses) with the hope that people will come back a week later.”

Diocesan officials also opted to increase flexibility for scheduling reconciliation in parishes on the Day of Penance and Mercy, Smith added. Since the event’s inception in 2013, parishes were required to make reconciliation available during a set seven-hour period of time, which Smith said was difficult in parishes with multiple worship sites. This year, he said, the diocese did not establish specific hours during which the sacrament must be available, but instead asked parishes to offer the sacrament at least from 2 to 4 p.m. and 6 to 8 p.m. Smith noted that priests in parishes with multiple worship sites will be better able to divide their time among the different locations, and in some cases will be assisted by senior priests.

When the Day of Penance and Mercy was first proposed, the idea was met with slight reluctance from priests due to the time commitment involved, Smith said. Now, however, the event “has become a point of grace for priests as well,” he said, acknowledging that the day “is a lot for priests, and we are lucky to have priests in our diocese that are willing and eager to do this.”

The benefits of the Day of Penance and Mercy are not exclusive to Lent, Smith said, noting that diocesan officials have encouraged parishes to make the sacrament of reconciliation more readily available during the Advent season as well. For example, parishes of the diocese’s Central Deanery chose a day in December 2018 on which penance was offered during extended hours in most of the deanery’s 11 parishes. Parishes in the Monroe West Deanery similarly opted to make penance available at various parishes over multiple days during Advent, he said.

Smith said the numbers of people lining up for reconciliation on the Day of Penance and Mercy each year indicate that the event provides Catholics with an opportunity to rediscover the sacrament at times convenient for them.

“What I have heard is a gratefulness that there is a time other than Saturday before Mass, so that there is this extra time to be able to do this. It also raises the awareness of this sacrament,” he said.

EDITOR’S NOTE: For a list of times and locations for the Day of Penance and Mercy, visit https://catholiccourier.com/dayofpenance2019. For more information on the sacrament of reconciliation, including its history, theology and how to prepare for it, visit http://forgiven.dor.org.