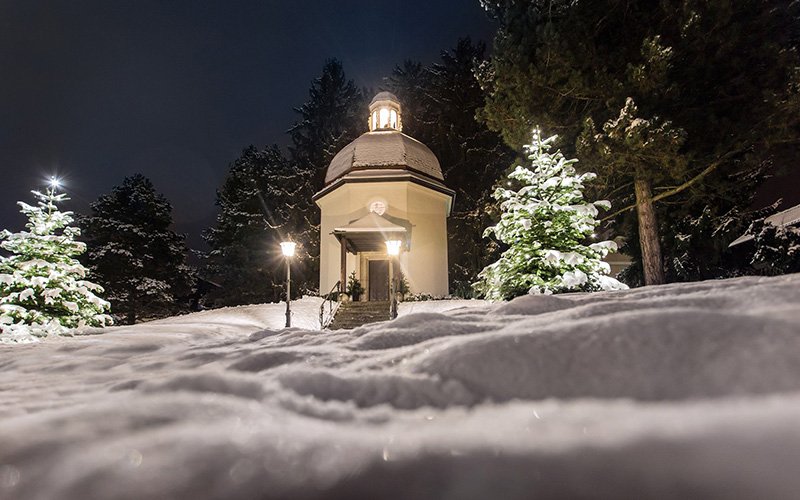 The Silent Night Chapel, which is in the town of Oberndorf in the Austrian state of Salzburg, is a monument to the Christmas carol "Silent Night." The chapel stands on the site of the former St. Nikola Church, where on Christmas Eve in 1818 the carol was performed for the first time. (CNS photo courtesy www.stillenacht.com)

The Christmas song “Stille Nacht” (“Silent Night”) may have put the town of Oberndorf, Austria, on the map, but it’s the chapel memorializing the beloved carol that is the town’s main attraction.

Best seen blanketed in snow, the small octagonal-shaped chapel, just 13 miles from Salzburg, is a tourist destination any time of year.

With a storied past, the song plays a key role in a small Alpine town, a brief ceasefire during World War I and a beloved local debut.

An often-shared legend says Father Joseph Mohr wrote the lyrics because his parish organ was broken. He asked Francis Xavier Gruber, the parish organist and school master, to come up with the music to accompany it just hours before Christmas Eve midnight Mass at St. Nikola Church in 1818.

Actually, Father Mohr wrote it as a poem two years earlier while living in Mariapfarr, Austria.

But the song, “Stille Nacht,” did make its debut Dec. 24 in 1818 at St. Nikola with Father Mohr on guitar playing Gruber’s melody and both men singing as the broken organ sat idle.

The Silent Night Chapel stands on the spot where St. Nikola Church stood before successive floods in the 1890s. That parish church was rebuilt a half-mile upstream and the abandoned chapel sat for years. It was razed in 1913.

A decade later, construction began on a new chapel on the same spot; it was completed Aug. 15, 1937, the feast of the Assumption.

Now translated into 300 languages, the song ranks among the most popular hymns. This year, Pushpay, an electronic giving platform, released results from last year’s survey of users, putting “Silent Night” as third favorite after “O Holy Night” and “O Come all Ye Faithful.”

UNESCO added the carol to its World Heritage List in 2011 in recognition of the song’s universal cultural and social value.

On Christmas Eve in 1914, during World War I, the song prompted a cease-fire as French and British troops faced off against German troops in Flanders, Belgium. Both sides sang Christmas carols, but “Silent Night” was the only one they all knew. The soldiers met briefly to sing, play games and trade goods.

The town is very walkable. Must-sees are the Salzachdamm, constructed in 1920, and the Salzach River, which brought prosperity to the area from the shipping industry, especially moving salt to large transport ships. Don’t miss the bridge over the Salzach that connects Oberndorf with Laufen on the edge of Bavaria in Germany.

A stop by the Silent Night Post Office will net a Christmas stamp and a seal for your outgoing mail. If you time it right, you can visit the Christmas Market there starting in mid-November.

Every Christmas Eve since 1953, the chapel commemorates the song with a performance at 5 p.m. that draws people to hear and join in singing the familiar lyrics:

All is calm, all is bright.

Round yon Virgin, Mother and Child.

Holy infant so tender and mild,

This first stanza of the three translated from the original German six stanzas is familiar to most. The simple words and melodic tune promote that sense of peace the people of Austria were looking for after the Napoleonic Wars.

The song ranks among the top tier of most popular Christmas carols. It has been recorded by vocalists from Bing Crosby in 1935, to Mariah Carey, the a capella group Pentatonix and countless more.

The soothing song still delights more than 200 years since its debut in an Austrian village.

Editor’s Note: To hear an audio article with “Silent Night” being sung from the chapel, go to bit.ly/3WpnvTV.

Augherton is managing editor of the Arlington Catholic Herald, newspaper of the Diocese of Arlington.