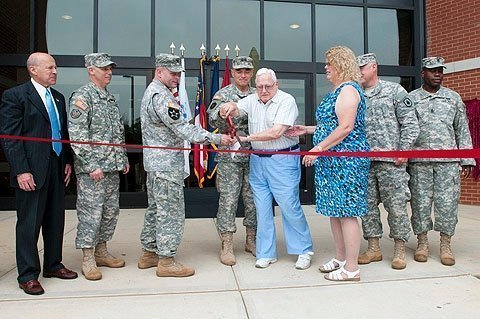 Robert Heindl (center) cuts the ribbon Sept. 8 at the Armed Forces Reserve Center at Fort Benning, Ga. The building was named for his brother, the late Father Elmer Heindl, a diocesan priest and chaplain.

When the U.S. Army’s 98th Training Division was moved recently from Rochester to Fort Benning, Ga., it brought with it the memory of a Rochester priest who has been called one of the most decorated chaplains of World War II.

On Sept. 8 the 98th Training Division’s Armed Forces Reserve Center was named the Heindl Center in honor of Father Elmer W. Heindl, who was a diocesan priest from 1936 until his death in 2006. Father Heindl served at parishes in Dansville, Auburn, Rochester, Webster, Scipio Center, Genoa, Fleming, Gates, Cato, Red Creek, Weedsport and Greece.

As an unarmed chaplain during World War II, Father Heindl served with the 145th and 148th infantry regiments under the 37th Division of the U.S. Army. He was at the front lines in the dense jungles of the Pacific islands and during the battle for control of the city of Manila in the Philippines.

"His efforts to rescue fellow soldiers from danger as a noncombatant during World War II are truly extraordinary," said Brig. Gen. Dwayne R. Edwards in a letter nominating Father Heindl for the honor. "He is beyond doubt a hero by any measure. It is believed that Chaplain Heindl is one of the most decorated chaplains of World War II."

"He would have been very humbled and proud," Nichols said.

According to an Army biography, Father Heindl achieved the rank of lieutenant colonel and was awarded the Bronze Star for ministering to the wounded and dying and performing burial services in 1943 and 1944, on the jungle-covered islands of New Georgia and Bougainville in the Solomon Islands, where the allied forces were attempting to set up strategic airfields. He calmly completed the burials of seven members of an engineer battalion despite being fired upon by Japanese snipers. At the conclusion of another burial, he took cover in an open grave when snipers began firing on the group.

Robert Heindl said his older brother didn’t shy away from the front lines and had many close calls.

"Word circulated through the soldiers, ‘Don’t stand next to Chaplain Heindl, because if somebody is going to get shot, it wouldn’t be him,’" Robert Heindl said.

Father Heindl earned the Distinguished Service Cross, the nation’s second-highest combat medal, for incidents on Feb. 6, 8 and 11, 1945. While under heavy machine gun fire on Feb. 6, he rescued both a dying soldier and a wounded soldier from a watch tower during an assault on the Bilibid prison in Manila, Philippines.

Robert Heindl said his brother had been there at the front lines in the prison when the Japanese were readying to shoot the prisoners before retreating from the facility.

"Some of them (the prisoners) were wounded," Robert Heindl said. "He went in and gave them their last rights, and he helped some of them out of the prison."

On Feb. 8, 1945, Father Heindl left a foxhole to drag a wounded officer to an aid station, despite being under heavy mortar and rocket fire. On Feb. 11, 1945, he dragged several wounded soldiers to safety and administered last rites to the dying.

He earned the Silver Star for administering first aid and evacuating many wounded and fallen soldiers during a point-blank tank fire fight and mortar barrages on April 17 and 25, 1945, in Luzon, Philippines.

It was during this fight that he left a foxhole to save the life of wounded officer Col. Lawrence Wright, his niece said.

"This colonel called him on the anniversary of that date every year and thanked him for saving him," Robert Heindl said.

Father Heindl also was awarded the Legion of Merit for his post-war service as chaplain of the 98th Division; he traveled widely to visit divisional units and he was successful at recruiting chaplain personnel.

His brother said as World War II was happening, Father Heindl’s family was unaware of how the priest had distinguished himself. When he returned home, he didn’t brag about his exploits but did begin to tell some of the stories of his service, Robert Heindl said.

Robert Heindl recalled his brother saying many times that he merely was doing what the Lord wanted him to do.

"He was never afraid," said his brother, who served in the signal corps with the 42nd "Rainbow" Infantry Division in France, Germany and Austria during World War II. "He always said he trusted in the Lord, and whatever happens, happens."

Tom Fisher of Avon, Ohio, said his father, N. Raymond Fisher, served alongside Father Heindl, and the priest confirmed his father and gave him other sacraments during the war. In the years following the war, Father Heindl remained close with the Fisher family and celebrated first Communions, graduations and weddings with them. They also traveled together to Manila in 1989 to attend the 44th anniversary of the liberation of the city. On that trip, Father Heindl celebrated a Mass for thousands and the group was honored with a formal dinner reception.

"There was a half a million people at this Mass," Fisher said.

Nichols said her uncle often thought of the people of the Philippines and frequently referenced the liberation of the Manila prisoners as he thought about the end of life.

"A night that those prisoners expected would be a terrible end to their lives turned out to be a wonderful new beginning, their rescue and their salvation," according to Nichols’ remarks prepared for the ceremony. "Uncle Elmer said he wondered if that wasn’t what death would be like. Each of us scared of dying because we don’t know what might happen, and then it turns out to be the best thing that could ever happen to us — eternal salvation and our rescue."